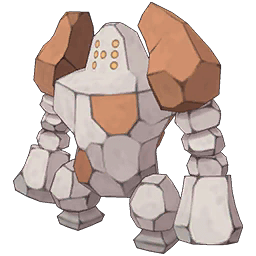 Regirock was sealed away by people long ago. If this Pokémon’s body is damaged in battle, it is said to seek out suitable rocks on its own to repair itself.

X Attack All
Raises the Attack of all allied sync pairs by 2 stat ranks.
Rock Tomb
Lowers the target’s Speed by 1 stat rank.
Ready to Rock!
Restores an ally’s HP by approximately 40% of its maximum HP. Raises an ally’s Defense by 2 stat ranks. Applies the Gradual Healing effect to an ally.

When the user enters battle with full HP, applies the Enduring effect to it.