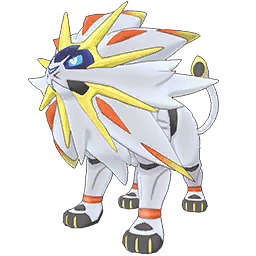 Sometimes the result of its opening an Ultra Wormhole is that energy and life-forms from other worlds are called here to this world.

Solgaleo is a Striker with very clearly-defined and hugely impactful strengths and weaknesses. These make it an excellent choice on some Teams and sub-optimal at best on others. For example, its glacial speed in Co-op and complete lack of Critical Hit Rate Buffs can make it appear mediocre in comparison to pairs like Mewtwo and Golisopod. However, if these weaknesses can be compensated for through proper Support, the sheer power of Solgaleo’s Moves gives it some of the highest damage potential in the game.

Solgaleo’s biggest strengths are its two incredible attacking moves, Focus Blast and Sunsteel Strike. Focus Blast’s 142 base power from a three bar move was unheard of until Solgaleo came along, especially with “Bright as the Sun!” completely compensating for its poor Accuracy. On top of that, Sunsteel Strike is one of the very few moves that completely ignores all Passive Skills and can’t be Endured.  This means that against certain bosses, Solgaleo is nearly always the optimal Striker choice because it is one of the few who can score Critical Hits against bosses who are immune to them.

For all of Solgaleo’s raw power, quick and efficient Self-Buffing is just not something that it does. For it to max out its own Sp. Atk, it needs to spend six whole bars of Move Gauge to use “Bright as the Sun!” twice, and it requires outside Support to be able to increase its Critical Hit Chance at all. This means that in Co-Op, to reach the bare minimum Setup to do any significant damage at all (one “Bright as the Sun!”), Solgaleo needs to spend three bars of Gauge. This wouldn’t be as big a deal if this maxed Solgaleo’s Sp.Atk and its Speed stat wasn’t so mediocre, but as it is without Support from the other two players it is very difficult for Solgaleo to get into a position to deal serious damage in Co-Op. In Single Player, while not quite as big an issue, it will still force Players to dedicate both of their other Team slots to raising Solgaleo’s stats and restoring the Move Gauge for Solgaleo to reach its full damage potential.

Supports are incredibly important for Solgaleo to be able to deal the great amount of damage it is capable of. More specifically, any Support that can raise its Critical Hit Rate (like Dusclops or Meganium), regenerate the Move Gauge (like Serperior and Salamence) or increase Sp.Atk (like Rotom and Alakazam) will make an incredible teammate for Solgaleo.

Metal Claw
Has a chance (10%) of raising the user’s Attack by 1 stat rank.
Sunsteel Strike
Ignores passive skills that would reduce the damage of this attack. Ignores passive skills that would protect the target against a critical hit. Ignores the target’s Enduring effect.
Bright As the Sun!
Raises the user’s Attack, Sp. Atk, and accuracy by 3 stat ranks.
Focus Blast
Has a chance (10%) of lowering the target’s Sp. Def by 1 stat rank.

Stuck on Opening Loading Screen Error
Recently I got a new phone, one that’s finally capable of playing Pokemon Masters…
Sylveon
Hello is there any certain way I can get a slyveon ? 4 posts - 3…
Account Not Linking (Error 30209)
Hi everyone, I made a quick post about this in the general error code thread, but I’m…
Serena/Delphox Question
Hey everyone, new player here. So, after reading up on some of the sync pairs, I…
Masters of land and sea battle 2 hoenn team
How to do this without may/steven/archie/maxie… Team discussion time Got wallace, if…
Read More