Shauntel & Chandelure are a very good Ghost Type Sync Pair, who excel at raising Sp. ATK and Speed. Their most powerful Move has the chance to lower an Enemy’s Sp. DEF for additional Damage.

Shauntel's “A Tale of Triumph!” also raises Chandelure’s Speed by 3 levels and Evasiveness by 2, albeit with the detriment of leaving Chandelure burned. 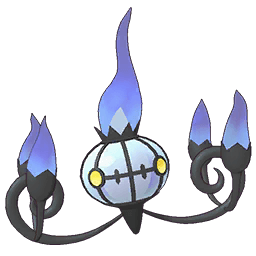 Being consumed in Chandelure’s flame burns up the spirit, leaving the body behind.

Stat Condition 2x Damage
Sp. Atk Up: Self
Sp. Def Down: An opponent
Speed Up: Self
Evasion Up: Self
Burn
Unfreeze
Attacks Ignore Damage Reduction
Low HP Power Up

Chandelure is a powerful single target Special striker who is unfortunately outclassed by other powerful offensive pairs like Houndoom and Pidgeot both in terms of damage and versatility. Despite a complete lack of access to AoE options, Chandelure is still out damaged by many of its counterparts. However, while there are better options for almost any team that would consider making use of Chandelure, if for whatever reason they are unavailable Chandelure’s powerful moveset and above average stats allow it to function as a perfectly respectable striker on any team looking for lots of single target damage with minimal setup.

Chandelure has access to some of the most powerful boosting moves in the game in “X Spatk” and its incredible unique move “A Tale Of Triumph!”. X Sp.Atk is a powerful move on any Special Striker because it allows them to quickly boost their own damage output without the need of a support. The real star of Chandelure’s moveset, however, is “A Tale Of Triumph!”, through which Chandelure is easily able to fix the two biggest weaknesses,with it's stats bulk and Speed. The huge amount of Speed it grants lets Chandelure take its Speed from below average to more than passable, and the sizable boost to Evasion gives Chandelure an impressive amount of survivability for a Striker.

While other powerful Special Strikers like Houndoom and Alolan Raichu have access to devastating AoE attacks that allow them to end games in seconds given proper support, Chandelure has to be content with dealing its considerable amounts of damage to one opponent at a time. This is especially problematic considering Chandelure’s poor bulk, which pushes it towards ending games before stage bosses can pull of their Sync Moves.

The biggest thing holding Chandelure back as a Striker is its complete lack of anything to set it apart from other powerful offensive pairs. While it does have an incredible boosting move in “A Tale Of Triumph!”, it only serves to patch up Chandelure’s poor base stats, not push them over the edge like the unique moves of more potent Strikers (e.g  Lycanroc-Midnight and Pidgeot).

Chandelure’s setup moves cover its weaknesses nicely and allow it to function on a wide variety of teams and with nearly any support, but it particularly appreciates pairs who can boost its Special attack or Speed like Serperior and Samurott.

Hex
Its power is doubled if the target is affected by a status condition.

Dark Tales of the Shadow Ball

When the Pokémon attacks, ignores damage-reducing effects on the opponent’s field of play.