With dumpster Stats and a depressing lack of Self-Buffs, the painfully slow and actually quite weak combo of "Rock Solid Finisher!" and Rock Slide is its only claim to "fame". Unsuitable for any kind of use on Stages more difficult than Supercourses. 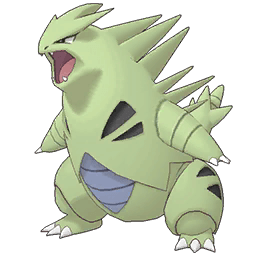 It wanders through the mountains seeking opponents to fight. If it finds an opponent that’s not worthy, Tyranitar ignores it and wanders on.

Speed Down: An opponent
Attack Up: Self
Flinch
Defense Up: Self
Next Sure Hit
Next 100% Critical Hit
AoE Damage
Sandstorm Stat Decrease Immunity

Tyranitar is a fairly weak AoE Physical Striker that is outclassed by Special AoE users like Houndoom and Alolan Raichu, as well as by powerful single target Physical Strikers like Pinsir and Lycanroc-Midnight in terms of both damage per move and DPS. This is a result of the combination of its below-average stats and the slowness of the “Rock-Solid Finisher!” into Rock Slide combo, which is its main selling point over other Strikers.

An overall mediocre pair, rising standards for what Strikers should be capable enough have erased its former niche as the only Physical Aoe Striker and left it nearly unusable on any stage more difficult than a Supercourse.

Rock Tomb allows Tyranitar to deal consistent single target damage and support its team by lowering the opposing team’s Speed while X Atk is a great boosting move for any physically offensive pokemon. Past those, the real strength of Tyranitar’s movepool is its access to a Sure Crit AoE move with high power and chance to flinch through the combination of “Rock-Solid Finisher!” and Rock Slide. While it’s slow and uses up a lot of gauge, the sheer power of that combo can end games on its own.

While Tyranitar’s stats are relatively low in every category, its Speed stat in particular is one of the worst in the game and makes it very difficult for it to fulfill its role as a striker, especially since it doesn’t have a strong one bar move to make up for it. It's slowness doesn't just come from its Stats either; its main combo of "Rock Solid Finisher!" into Rock Slide takes a painfully long time to execute.

Tyranitar is somewhat limited in terms of team composition due to its Physical designation and low Speed, but it greatly appreciates support from teammates who can raise its Attack and help it take advantage of its powerful AoE damage, and supports who can replenish the Move Gauge and allow Tyranitar to use Rock Slide more often. Dusclops and Oshawott are strong candidates for the former buffing role, whereas Serperior and Salamence are great options for filling the move gauge.

Stats cannot be lowered in a sandstorm.