Mediocre stats, mediocre Attacking moves, and poor self buffing. Rayquaza's dumbing down in Pokemon Master's is one of the game's great tragedies. Really dedicated fans who took the time to grind out its 20 Power Ups will find a pair that, while usable with the specific Dauntless Lucky skill and a huge amount of team Support, is still never a better option than just using Dragonite, Kingdra, or any of its more viable dragon counterparts. 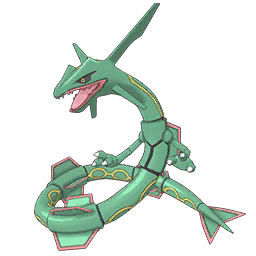 Rayquaza is said to have lived for hundreds of millions of years. Legends remain of how it put to rest the clash between Kyogre and Groudon.

While it doesn’t quite match the overwhelming power of Mewtwo or versatility of Solgaleo, Rayquaza can still be a highly effective pair in both Co-Op and Single Player. It is more than capable of dealing good amounts of mixed damage, and its ability to do so mostly without the assistance of an outside support makes it a fairly reliable pair in Co-Op. Overall, while outclassed by other legendary strikers, Rayquaza is still excellent for a free pair and a worthy investment of your time to train up. Additionally, it holds an incredibly useful niche as one of, if not the most powerful mixed attacker in Single Player.

High levels of mixed damage is a rare thing, especially for a free pair like Rayquaza. With only a small number of exceptions (Rayquaza among them), most sync pairs capable of mixed damage deal underwhelming amounts and require heavy team support to be credible threats. Rayquaza, on the other hand, has the stats and moveset to deal respectable amounts of both types of damage all by itself, making it much more effective in Co-Op.

All of Rayquaza’s moves, with the exception of Aerial Ace, have major drawbacks. The huge loss of bulk from “Stellar Imagination!” means it will likely fold as soon as it’s targeted by the stage boss. On top of this, both of its attacking moves have large drawbacks which “Stellar Imagination!” can only compensate for twice before they start to heavily reduce Rayquaza’s damage output.

Rayquaza lacks a way to immediately buff its own speed (since it nearly always needs to Outrage before using “Stellar Imagination!”), and this forces it to wait for three bars of gauge before it can start dealing damage in Co-Op. Even once it gets its buffs rolling, “Stellar Imagination!” only increases speed by one stage at a time, and it relies heavily on three bar moves to deal damage. The issue of wait time is compounded by the bulk penalty from “Stellar Imagination!", which compels Rayquaza to remain on the field for as small an amount of time as possible.

Since it completely lacks a way to raise its own Critical Chance, pairs like Dusclops and Torchic who can boost the entire team’s greatly benefit Rayquaza. Past that, any support who can raise Rayquaza’s Attack, Special Attack, or Speed will go a long way towards getting the most damage out of it you possibly can. Additionally, Arcanine can completely remove Outrage’s drawback and boost its speed, turning it into a powerful physical attacker.

Powers up moves when weather conditions are in effect.