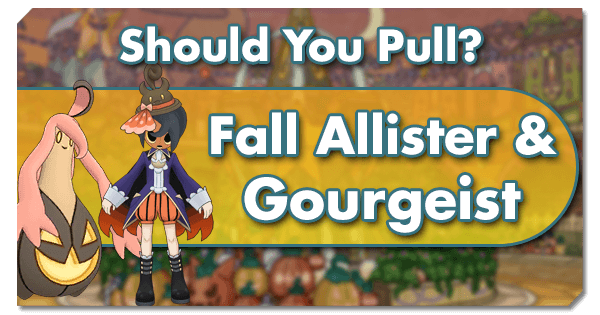 Allister & Gourgeist are great for helping with quick setup on attackers that can’t self-max/are slow to max their own Critical Rate, can tank well, and can bring Ghost Type damage to new heights. They can work wonders for lesser Ghost Type attackers in particular, patching up their damage output to make them more viable. However, they’re not exactly universally-useful due to their near-total lack of offensive buffs outside of Critical Rate and some Special Attack via their grid, so Free-to-Play players shouldn’t feel bad about skipping them in general.

Allister & Gourgeist comprise a Ghost Type Support Unit with a weakness to Fire Type attacks. They have solid bulk that is skewed towards the Physical side, and fairly low Speed. The review of their moves starts with Hex, which is a 2-bar Ghost Type move that deals additional damage if the target is suffering from a Status Condition. It’s not the best move, but a decent overall option for a cheap-ish attack to spam after utilizing all skills. X-Defense All is next, which is the simple, often-seen skill that grants +2 Defense on use at 2 uses base. Trick-Or-Treat is next, and this 2-use move adds one stack of the Ghost Rebuff effect to a single target, causing them to take additional damage from any Ghost

Type moves that they may take. Finally, we have Wait for It…, which is a 1-use Trainer Move that grants +3 Critical Rate to the team and zero to five of the following bonuses at random:

What’s a Sync Pair without passive skills? Allister & Gourgeist start out with Revenge Boost 9, which has a 100% chance to recharge the Move Gauge by 1 when taking a hit. Next is Natural Remedy, which removes all status conditions the first time that Gourgeist is inflicted with one. And, finally, First Aid 4 regenerates about 40% of Gourgeist’s HP when it’s in a pinch, increasing this Sync Pair’s longevity as a result.

All-in-all, Allister & Gourgeist are actually a bit unique as far as Support units go. They’re solid in terms of tanking capabilities, with passive abilities that make their job all the easier to pull off with Status removal and a bit of healing in a pinch. They also have particularly interesting synergy with Ghost Type attackers thanks to Trick-Or-Treat’s ability to force the opposition to take more damage from Ghost Type attacks. And considering the power of some of the top Ghost Type attackers, this can lead to some very large numbers, even if the stage doesn’t sport a Ghost weakness. With maxed Critical Rate, boosted Defense, free Move Gauge bars when hit, and a bit of random-chance acting as icing on the cake, Allister & Gourgeist are definitely effective at what they do. And don’t let Trick-or-Treat mislead you; this is also a Sync Pair that can work perfectly well with non-Ghost teams, as the ability to insta-max the team’s Critical Rate in particular can be a huge boone for a lot of Sync Pairs, potentially allowing the team to go on the offensive very early.

However, Allister & Gourgeist are also just a bit aimless in terms of their primary job. They work best alongside Ghost Type attackers, but none of the top Ghost Types need help buffing their Critical Rate. For example, Sygna Suit Renegade Cynthia & Giratina and Anniversary Lillie & Lunala both max their own Critical Rates with a single move use, while Sygna Suit Korina & Marshadow sport Dire Hit All + and can max the entire team’s Critical Rate fairly quickly. And to top this all off, it’s probably best to wait to use Wait For It… rather than hitting it at the start of the battle, as many of the random effects are likely to outright go to waste if used too early. This isn’t a huge deal, as the real draw to using this Trainer Move is the insta-maxed Critical Rate, but it can still feel a bit vexing to score the 20% Recovery effect when the team is all at 100% HP, or the Move Gauge +6 effect when the Move Gauge is already sitting at 6 bars. And speaking of the Move Gauge; while Revenge Boost 9 is nice for keeping up with gauge-hungry attackers, it can also prevent quad-cueing if it activates at the wrong time. This isn’t absolutely horrible, but it can slow down the team’s damage a bit if it’s not compensated for. And then there’s also the fact that this is definitely a physical tank. While nowhere near as skewed towards one side or the other like Jasmine & Steelix or Jasmine & Celesteela, Allister & Gourgeist definitely prefer tanking Physical hits, and don’t really like having to deal with powerful Special moves like Hyper Beam.

Looking at ⅕, we have the usual “base unit with a little extra flavor” case, with X-Defense All: MP Refresh 2 rising as the stand-out as it can potentially max out the team’s Defense and allow Allister & Gourgeist to waste an extra turn or two without dipping into the Move Gauge. ⅔ is actually pretty helpful, with Healthy Healing for more longevity, while Catalyst, Revenge Boost 2, and Hex: Move Gauge Refresh 3 can all help to keep up the Move Gauge. ⅗ is where we get the full kit, with Active Healing 9 acting as something of kin to a Passive Regeneration effect that has no duration limit and stacks with other Passive Regeneration effects, while Hex: All Ramped Up adds some Special Attack support, Healing Hand 4 offers Status Cleanse support, and Synchro Healing 1 helps the team with a bit of healing.

Overall, ⅖ should probably be the minimum goal, but ⅕ is 100% viable as well, as Allister & Gourgeist get most of their most appealing effects right out of the box.

So let’s be honest here; the main draw of Allister & Gourgeist is Trick-or-Treat and the ability to deal more Ghost Type damage as a direct result. However, let’s also look at this with a bit more of an analytical eye; just how often do the top Ghost Type attackers come up short on damage output? If you’ve already got any of the big-name Ghosts, then Alister & Gourgeist will deliver, but their performance may be a drop in the proverbial bucket in this case. In truth, a strong case for pulling on this banner is if you lack the top-tier Ghosts, as the Ghost Rebuff effect can pull the Sync Pairs that you do have into new viability. And on that note; if Allister & Gengar is your main Ghost Type damage-dealer, then it’s still 100% viable to pull here, as it’s confirmed that same-name trainers will be able to be picked together in an upcoming update (although we're not entirely sure of potential specific conditions there)!

All-in-all, Allister & Gourgeist aren’t must-haves, but they can definitely deliver if you happen to have need for their unique skills.