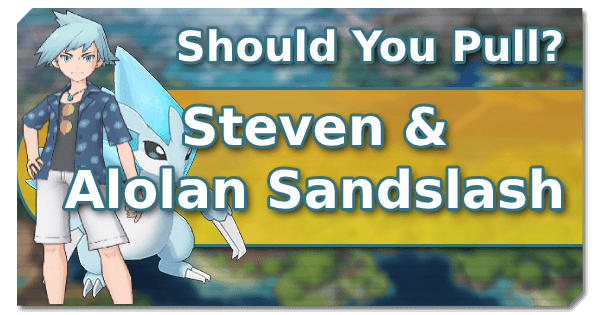 -Like Silver, Summer Steven sets up Weather (in this case Hail) with Alolan Sandslash’s Sync Move, which powers up its toolkit.

-Like Guzma, Summer Steven gets no Quarter, which allows Icicle Spear to do massive damage consistently.

-A mixture of Silver and Guzma, but Hail centric with a strong Tech niche.

-The best Ice Type striker of the metagame, with a very nifty Sync Grid that opens up its Tech capabilities through Freeze.

-It can self buff its Attack, Critical Hit rate, and Accuracy, while its Sync Move sets up Hail, which triggers its Passive Skill.

-However, Alolan Sandslash cannot max its Critical Hit rate on its own unless Hail is the active Weather condition, which requires it to either hold off until its Sync Move or call upon Candice.

The capability to Freeze targets makes it a very useful option for boss fights like Battle Villa and Legendary Arena, since Freeze renders the victim immobile. Freeze isn’t exactly as abusable as Sleep, nor is Summer Steven as efficient as Serena as an incapacitator. Yet, having this niche as a Striker with a decent chance of trigger is still more than welcome.  In other, faster paced modes, Sandslash’s long setup phase can hurt it. However, it retains its consistent chance to freeze even without its Hail and stat buffs, so although it isn’t the quickest Striker to start dealing damage out there it’s still a solid option for both Events and Co-op.

Lucky Skill options include Fast Track 2, Critical Strike 2, and Mad Strength 2. Regardless of which one it’s using, Summer Steven appreciates the utility provided by Phoebe, who can max out Alolan Sandslash’s Attack boosts and Critical Hit rate, as well as offer Move Gauge refills to keep the Icicle Spear machine running. In terms of potential Team Members, Alolan Sandslash’s Hail setting capabilities unlock synergy with Hail reliant Sync Pairs, most notably Lorelei, who can really abuse the Freeze RNG through Blizzard and Hostile Environment. The advent of Type Skills also brings Defense Crush Mega Glalie into the equation, who can provide Passive Heal either in replacement of or on top of Healing Hail, as well as cheap AOE Freeze chance. Defense Crush even increases Alolan Sandslash’s damage output by lowering the target’s Defense, which also helps increase the damage dealt through Last Word.

Summer Steven is honestly worth pulling simply because of his status as a Seasonal Sync Pair. Missing out on him now means that he won’t be available again for at least a year. This would extend to the usage of viable Hail teams since he is the archetype’s sole reliable Striker. However, players might want to skip out on him if they are low on Gems, since his Banner isn’t too far away from Sygna Suit Cynthia’s.

From a domination standpoint, Summer Steven isn’t exactly on par with Sygna Suit Red. However, it is still very much capable of sweeping, and as the game’s only viable Hail setting striker it does an excellent job of supporting its teammates without sacrificing damage.