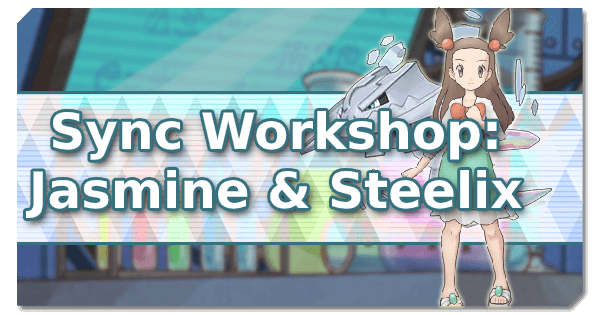 “Clang!” As the premier physical wall in Pokemon Masters, Jasmine and Steelix are a bit pigeon-holed into their role, but their sync grid options definitely give them at least some degree of variance. Builds generally come in two flavors: tanks and bulky attackers. For the more generalist sets like Supportive Wall and Sync Move Turbo, the whole point is to support a strategy around having Steelix use Sync Moves to recover, mega evolve, and/or boost the Move Gauge while spreading around defensive buffs and protecting the rest of the team. Offensive sets like Bulky Attacker make use of Steelix’s situational yet potentially substantial damage buffing grid to make Steelix hit hard while still tanking hard hits.

One note when choosing a sync grid for Jasmine and Steelix: this pair is very polarizing. While some other pairs can work in most fights, you need to know what you’re fighting in order to ensure that you’re using Steelix’ massive physical bulk to its maximum potential, meaning some grid builds may be particularly situational, but will tend to excel in the right places. 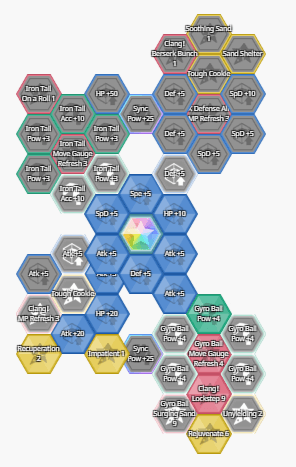 This grid seeks to maximize Seelix’s capability as a general-use utility wall. The focus here is on maximizing the number of sync moves used in order to keep Steelix in the game. For example; Impatient 1 may only have a 10% chance of successfully reducing the sync move counter, but given how many hits Steelix is going to take in most fights, it’s generally worth the gamble. Clang: Lockstep lets Steelix give back a few bars throughout the fight, and Gyro Ball: Move Gauge Refresh 4 offers a refund on Steelix’s most spammable attack. To cap it all off, Recuperation 2 provides some very nice healing on sync move use and Rejuvenate 6 helps to make up for the lackluster damage offered by Steelix’s sync move by fully restoring the gauge while also making it a bit easier to get to the next sync move after that. At this point, Mega Steelix can take the field with even stronger defenses/attack, and a Last Word when it explodes at the very end.

This is probably the most universally useful sync grid on the list, as it lets Jasmine and Steelix slot in against most physical attackers and provide valuable buffs and bar to the team while not taking up too much offensive real estate. Unless you want Jasmine and Steelix for a very specific matchup or strategy, some variation of this is likely going to serve you best. 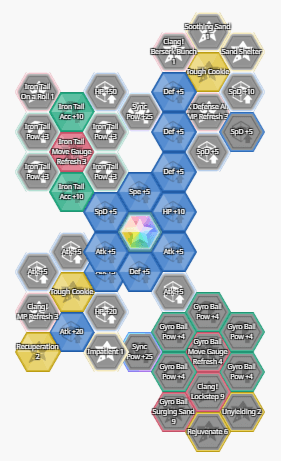 While it’s never going to reach the huge damage potential of sync pairs like Sygna Suit Red & Charizard, Steelix can be a capable Steel Type attacker in its own right thanks to its ability to just keep on living. The basic goal is to focus on two Tough Cookie nodes, which increase damage when defense is boosted, while also picking up boosts to the accuracy and power of IronTail, Steelix’ strongest attack, via two Iron Tail Acc+10 nodes and Iron Tail Move Gauge Refresh 3. Finally, this grid picks up Recuperation 2, as it cannot be overstated how great recovery is on Steelix. Alternate builds could drop Recuperation 2 if you don’t want to spend Sync Moves on steelix, but you will definitely feel the difference. To that end, Iron Tail On a Roll 1 can make Steelix both stronger and more supportive as it breaks down enemy defense, while Clang! Berserk Bunch 1 can grant a bit more raw damage while also letting Steelix support its team a bit more. It’s also viable to buff Gyro Ball instead of Iron Tail due to its lower cost, but the damage drop is very noticable

This set can work wonders with team-mates that have exceptional speed potential such as Red & Charizard or Plumeria & Salazzle, as it lets Steelix eat up excess bars by dealing extra damage while also protecting its team. 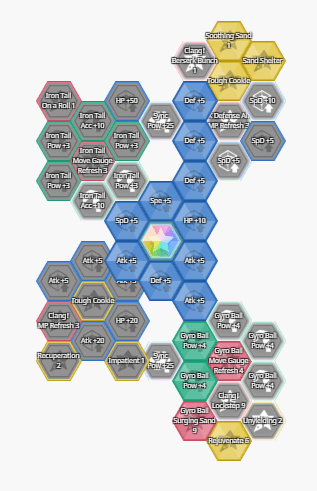 This one largely builds itself. Steelix likes healing, and Soothing Sand 1 is enough to make it worth consideration. This one is super simple: get Steelix into the sand and spam Gyro Ball. The sheet power of Gyro Ball: Surging Sand 9 makes this a very appealing set, especially if the opponent boosts their speed. Other options include dropping Tough Cookie in favor of Clang! Berserk Bunch 1 and dropping Rejuvenate 6 for other effects such as more raw power on Gyro Ball if you don’t intend to use Steelix for sync moves very often.

While this seems like a natural set for Steelix, it also has a number of drawbacks that need to be addressed. First is the very temporary nature of Sandstorm, which gives a Pokemon designed for the long game a short window to shine. The second is the fact that Steelix is also likely to compete with Cynthia & Garchomp for both a mega evolution and sync grid. To this end, an alternate set would involve Sand Shelter and buffing nodes such as Clang! Berserk Bunch 1 to make Steelix synergize a bit better with Cynthia a bit better, but the recovery effects that this entails generally won’t last long enough to make a huge difference. It's also possible to leave Gyro Ball and Rejuvenate 6 alone to aim for Recuperation 2 and boost this set's longevity, but you will definitely feel the dent that this makes in the team's speed due to the lost gauge bars. 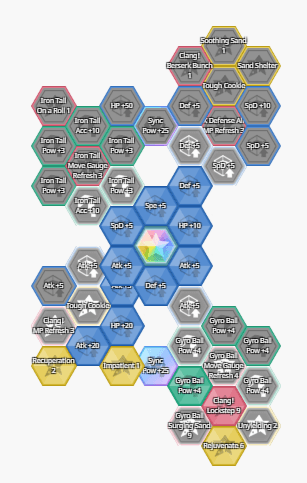 This set is very similar to the first, but its design makes Steelix far more passive and less a unit unto itself and more a renewable resource factory. As before, the goal is to get the Sync Move countdown squared away as quickly as possible with Impatient 1 along-side the moves of Steelix’ partners, but this time the entire focus is on powering up and utilizing Steelix’ Sync Move, Steel-Clad Irontail, which is decently powerful with a built-in boost for however many times Steelix’ defense has been boosted. Then, on use, Steelix regenerates valuable HP with Recuperation 2 and restores 6 bars with Rejuvenate 6, letting the team go to town in short order. Clang! Lockstep 9 is there to help support this basic tactic, while the remaining sync orbs are largely just to boost Steelix’ stats.

While viable, this grid supports a more passive play-style for Steelix that makes it feel like you only have 2 units plus a brick wall. As such, the remaining two units need to have some very solid synergy in order to play off of this set well. It’s also probably best to avoid other Mega Evolution partners with this grid, as Mega Steelix really wants those sync moves for recovery! The best use for this set is when you expect to need a wall between the enemy and your attackers, but you really don’t want to use the wall directly beyond a bit of support.

Since Steelix is a defense-boosting unit and critical hits bypass defense boosts, Vigilance is a natural choice… to a degree. Clang! already blocks critical hits, but it’s also temporary, making Vigilance a decent choice for the long-haul. Stoic 2 is a good choice for sets that don’t have X Defense All: MP Refresh 3 as it can help max out Steelix’ titanic defense stat while also boosting its Sync Move, or all moves given Tough Cookie, though it’s best on a more active Steelix build. The same goes for Defense Crush 2, which can help support the team and works especially well alongside sets that use Iron Tail, as it gives very high odds of defense-drop. Surging Sand 3 can boost Steelix’ offensive presence in a sandstorm should the appropriate sync grid be chosen. Unbending is very niche, but can definitely help as Steelix hates having its defense dropped, Water Guard can allow Steelix to retain most of its edge against physical Water Types such as Feraligatr, and finally Normal Guard has niche uses in the Battle Villa, where several Pokemon tend to use normal type moves, such as Sawyer & Beware’s dreaded Giga Impact.