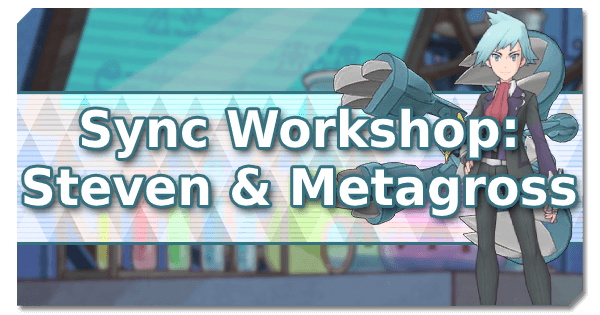 It’s no secret that Metagross is one of Pokemon Masters’ best and most ubiquitous Strikers, and a good chunk of what makes the pair so devastating can be found right here in its Sync grid builds. Some of the key Skills you’ll find throughout the builds include the deadly combination of Recuperation and Haymaker for constant sustain through crushing Sync Moves as well as Iron Head Aggravation for the surprising amount of defensive utility it provides. In terms of the builds themselves, there are three main ways to cook up a Metagross: a highly consistent straight-up attacker built around making Iron Head as devastating as possible, a massively tanky Striker that sacrifices a moderate amount of damage for powerful defensive buffs, and the legendary Haymaker Metagross made to deliver devastating Sync Moves. In terms of Lucky Skills, Metagross usually takes either Fast-Track 2 to make up for its lack of inherent Speed boosts or Critical Strike 2 for the excellent 20% damage bonus against most bosses. 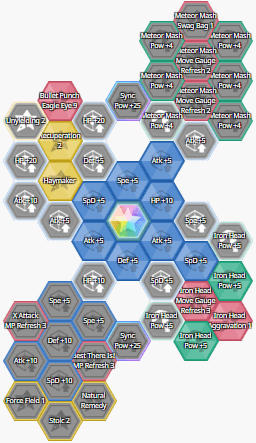 A very standard Striker build, this set takes advantage of Metagross’ Attack stat and powerful three bar Iron Head to simply put out as much DPS as possible with as little Support as possible. While there isn’t a whole lot special about the build’s concept, Metagross’s unique Skills and Moveset allow it to pull off some pretty interesting things. For example, Iron Head Aggravation gives the pair a rather large chance to Flinch which can be put to deadly effect in the notoriously Status-weak Legendary Arena. Additionally, Recuperation combined with Metagross’ natural bulk affords it much greater survivability than most Strikers while retaining its excellent damage output. As a final note, Bullet Punch Eagle Eye can be slow and clunky to use but is necessary for Metagross to max its own Crit, so if a Dire Hit+ user like Dusknoir is available feel free to drop it for increased Iron Head power. 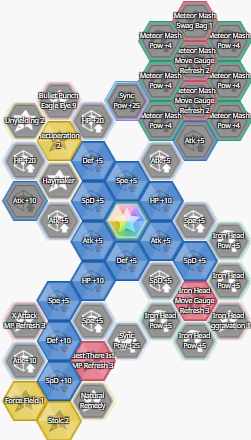 This version of Metagross aims to maximize its built-in survivability through potent defensive buffs, Status Effects, and healing. This makes it an excellent choice for the long haul of battle Villa 3v9’s and Legendary Arena matches, although the loss of upfront damage in comparison to other builds can make it suboptimal in some Event Stages. As for the specifics of those defensive buffs, the constant stacking of Stoic and Force Field throughout the game allows Metagross to steadily increase the team’s bulk throughout longer matches. Combined with Natural Remedy and the power of Recuperation, this set isn’t just one of the game’s bulkiest Strikers; it’s one of the most durable pairs in the meta. All of this, of course, while still pumping out the vast amounts of damage you’d expect from something like Mega Metagross. There's just one additional pointer for the use of this Grid you'll want to keep in mind before taking it out for a match: if it's to be included on a team that can provide it with more consistent Critical Chance boosts, you'll likely want to drop "Best There Is!" Mp Refresh for Iron Head Aggravation's excellent boost to Flinch Chance. This will further increase that pair's already excellent survivability as well as making it an absolute force in the notoriously Status vulnerable Legendary Arena. 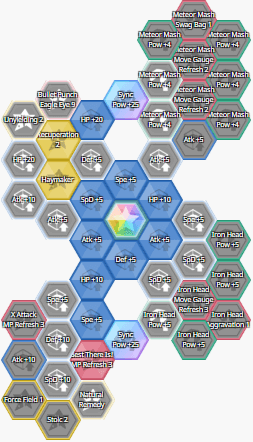 This highly flexible build makes use of a few key skills to maximize the power of Metagross’ Sync Move while leaving Grid Energy for several different variations. Depending on what Supports the set is to be used with, Eagle Eye or X Attack Mp Refresh can be taken to allow the pair to max its own Critical Hit Rate and Attack respectively. If it’s going to have a pair like Dusknoir who can handle both already on its team, this Energy can instead be put into Stoic for increased survivability or Iron Head Move Gauge Refresh for more consistent damage. Overall, this set makes an utterly incredible choice for teams which can plow through the Sync Counter quickly and reliably. This is because the sheer power of Haymaker on top of Metagross’ base Attack and the build’s retention of a fair amount of bulk and non-Sync damage make it a complete monster when properly supported.

Metagross is capable of putting a fair few different Lucky Skills to good use, but these three are generally the ones most worthy of your precious Cookies. Firstly, Fast-Track 2 handily fixes what may be Metagross’ only major weakness: the complete absence of a way to boost its own Speed. While this is often the best option for more self-sufficient builds, Critical Strike 2 is still an excellent choice for any Striker and is certainly optimal when paired with a Support who can take care of the Speed issue. Finally, in the rare situation of Speed being handled by a Support against a boss with an immunity to Critical Hits, Power Flux 3 still provides a hefty damage bonus (although it’s rarely worth the Cookies to switch back and forth).