While Volcarona can't claim to do nearly as many things at once as Charizard, it's still one of the most devastating damage dealers in the game. No matter how you spin it, maxed offensive stats in one buff and a type shifted Hyper Beam make for a pair that can easily be slotted on any team you can think of and still quickly blow the other side of the field away. Although the Volcarona is extremely weak to physical aoe, isn't always the most gauge efficient, and needs to remake its whole Grid in order to switch between Struggle Bug and Hyper Beam, the sheer damage, near instantaneous setup, and ease of use it brings to the table makes it a top pick for any format not called Battle Villa (where its lone single use buff can be underwhelming). 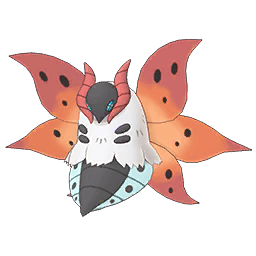 As it flies, it scatters its flaming scales. It was feared by ancient people, who referred to it as “the rage of the sun.”

Sp. Atk Down: All opponents
Crit Chance Up: Self

Charges the user’s move gauge by six after using a sync move.