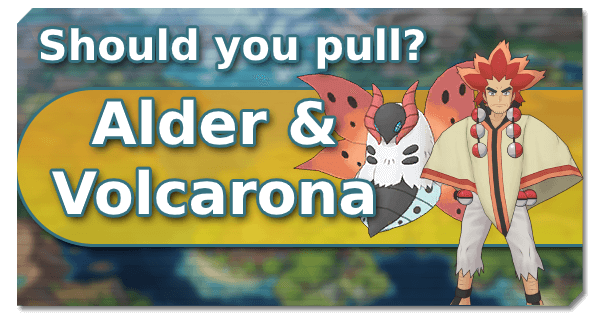 -Sets up extremely quickly, making them very beginner-friendly and allowing them to start attacking while most other strikers would still be buffing

Alder & Volcarona are definitely strong and versatile. With a largely complete kit for a striker that sets up very quickly, they can fully buff and start disassembling the opponent’s team in as few as 3 turns all on their own. This fact makes support units less of a requirement than with many other strikers, meaning tech units and secondary strikers can run beautifully with Alder & Volcarona with very little opportunity cost.

Another of their big strengths is the advantage of being able to go for huge single-target damage or surprisingly solid AoE damage with their grid. And while not as efficient in the ability to switch between the two play styles on the fly as Sygna Suit Red & Charizard, they’re still exceptional at either when played to their strengths. Their ease of use makes Adler & Volcarona a natural choice for Full Force battles and the Legendary Arena, where they can quickly wreak havoc without giving the other side much time to set up and attack.

They also shine in the Champion’s Stadium for the same reason, as it brings out their “do it once, do it right” playstyle and makes it shine. The one major game mode that they have a bit more of an issue with is the Battle Villa due to the variance of enemy attacks and the fact that their trainer move, Unparalleled Power!, only has one use per battle base. It’s possible to just enter a stage, use the buff, and then exit until the move scores an MP refresh from their grid, but even then the risk of physical AoE moves always lingers, ready to take advantage of the huge drop in defense that their trainer move brings. Perhaps the biggest issue that this sync pair faces is competition. With sync pairs like Lusamine & Pheromosa and Guzma & Golisopod pullable under virtually every new banner, the question has to be asked: are Alder & Volcarona worth spending gems on over just using their competition? The other issue is the fact that their self-sufficiency isn’t as important as it once was. It’s not a bad thing by any means, but with so many outstanding support units in the game now, it’s not quite as much of a prerequisite for a good Striker as it once was.

Two main ways to play Alder & Volcarona really stand out. The first is the obvious Hyper Beam-centric build. With two Hyper Beam Move Gauge Refresh 2 nodes and two Hyper Beam Accuracy +5 nodes, Volcarona can throw around some intensely powerful Bug Type Hyper Beams after a few quick boosts without needing to worry about missing or running out of move gauge quite as much.

The other main build is focused around the deceptively powerful Struggle Bug, which has nodes for Struggle Bug Superduper Effective 9 and Struggle Bug Critical Strike 5. Overpower and Devastation are also great for this build, as they boost damage to debuffed enemies for regular and sync moves, respectively. When the opponent is weak to Bug and Volcarona’s critical rate has been maxed, this attack’s power is similar to Charizard’s Heat Wave and can swiftly snowball.

By way of Lucky Skills, Alder & Volcarona appreciate the power that Critical Strike 2 provides, especially considering their ability to max their own critical rate. An argument for Unbending can also be made due to how much their trainer move drops their defense naturally, but the damage loss when compared to Critical Strike 2 is considerable, and this issue can easily be fixed by Alder & Volcarona’s team. For example; Skyla & Swanna not only patch up Volcarona’s defense, they can also patch up their speed to help with Hyper Beam’s high cost. Sygna Suit Blue & Blastoise can also patch up the lost defense from Volcarona’s trainer move while also tanking like none other and bringing a host of other supportive options to the table. Finally, units that can drop the enemy’s special attack such as Viola & Masquerain are also exceptionally helpful for Hyper Beam builds, as they can activate Overpower and Devastation on Alder’s Sync Grid without needing to spend turns using an unboosted Struggle Bug. This would be outstanding for a mono-bug team comp if we are ever blessed with a decent Bug Type tank.

If you don’t have any strong Bug Type strikers, then yes, they’re definitely worth pulling! A great sync pair available with a Pokefair’s enhanced five-star rate makes this a great overall investment. But if you already have one or more of the other major bugs, then they’re still worth it as the best Bug Type sync pair in the game, but not as vital to high-level gameplay. They can run through most of the game’s current formats extremely well, and could be an outstanding choice for future speedruns given how quickly they buff, but they’re unlikely to be as “must have” as a few other big names like the Kanto Sygna Suit Trio.