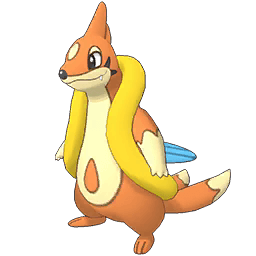 It floats using its well-developed flotation sac. It assists in the rescues of drowning people.

Flinch
Crit Chance Up: Self
Confusion
Attack Up: Self
Sp. Atk Up: Self
Rainy Move Gauge Up
Flinch Up
Confusion Up
Bind Up

Floatzel is one of the prime disrupting Pokémon in Pokémon Masters. Floatzel exceeds at disorienting the enemy, allowing it to deal tons of damage while the enemy is defenseless. Crasher Wake’s supportive kit is all about raising Floatzel’s offense, while Floatzel’s damaging moves revolve around locking up the enemy. Truly, a Sync Pair who work together to dish out a non-stop onslaught.

At first sight one might think “Since the chances are quite low, isn’t this a weakness?” However, that’s where the Passive Aggravation 1 kicks in. Aggravation 1 raises the chance of inflicting Flinching and Confusion, making sure that Floatzel can frequently make use of its moves’ secondary effects.

“CRASH!” drastically raises Floatzel’s Attack by +3 stages and raises its Sp.Atk by +1 stage.

It is true that Crasher Wake & Floatzel can do some serious damage when working together, with their game plan of quickly buffing up, Confusing and Flinching the enemy constantly, and pouring on the damage. However, while it sounds extremely good on paper, this Sync Pair has its limitations.

First is the fact that Floatzel’s offenses are sorely lacking. One might say that this pair doesn’t need additional damage because of all the status conditions enemy goes through, but that does still lead to an extremely long, drawn-out and often boring battle that could be avoided with some other Sync Pairs. Also, the offensive buff from "CRASH!" benefits Waterfall far more than Water Pulse, making the latter somewhat lackluster in its role of providing mixed offense options.

The secondary limitation is that Floatzel doesn’t have any AoE disabling moves, which means that while he has pinned down one enemy there will still be two enemies who strike back. Overall, this means that combined with his low damage output, Floatzel is heavily reliant on his allies to carry the bulk of the actual damage in combat, which begs the question of why you wouldn’t just use another, more synergistic pair.

Floatzel can do a lot on his own because Crasher Wake can raise both Critical Strike chance and damage output, so pairing him with a Sync Pair that has access to Dire Hit All would help Floatzel achieve 100% Crit Chance.

Also, teaming up with a strong Striker unit would be handy when it is time to do some serious damage, i.e. after Floatzel managed to tie up the enemy for your Striker Sync Pair to take them out of the equation.

This move’s power increases if the target is flinching.