By far the best immediate aoe offensive stat buffer, consider Clefairy a somewhat more versatile but less powerful version of Sabrina & Alakazam. While it lacks the Crit boosts and Reflect that make the latter so powerful paired with a single Special Striker, Clefairy's aoe buffs and compatibility with physical attackers opens up a huge number of team building options that no other Support could come close to enabling. Unfortunately, most of the comps Clefairy enables suffer from the lack of bulk inherent on a team with a slot dedicated to stat boosts as opposed to tanking, but the versatility the pair brings to the table still makes it a great pull for those looking to try out a variety of comps in battle Villa or Champion Stadium. 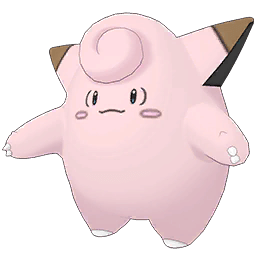 Sure Hit
Accuracy Up: All allies

Disarming Voice
Never misses.
X Accuracy All
Sharply raises the accuracy of all allied sync pairs.
Full Power!
Drastically raises an ally’s Attack and Sp. Atk. Ensures that the ally’s next attack will be a critical hit.
Moonblast
Has a moderate chance of lowering the target’s Sp. Atk.

Reduces the damage all allied sync pairs take when attacked by Dragon-type moves.

Restores the HP of all allied sync pairs after using a sync move.

Removes all status conditions from all allied sync pairs other than the user just before the user faints.