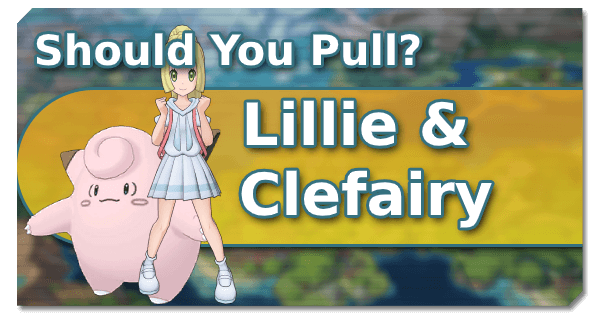 -One of three sync pairs currently capable of boosting accuracy, and the only one that has strong synergy with physical attackers and the ability to boost the whole team at once.

Lillie & Clefairy make for a unique sync pair with great offensive support capabilities. While their unique niche in the game is being able to boost team accuracy with X Accuracy All, they’re also one of only a few support units in recent months that can offensively support physical attackers well. While the niche of X Accuracy All is attractive and unique, most strikers use moves with 100% base accuracy, so it’s not universally useful. Its boosting skill is powerful, but is most useful on strikers that can boost their critical rate but not attack and/or special attack like Giovanni & Mewtwo, or with other support units that can boost critical rate like Sabrina & Alakazam. While these drawbacks should be considered, they don’t diminish the offensive support utility of Lillie & Clefairy. It just makes them a bit more niche than some other support units.

If played to their strengths, Lillie & Clefairy can work outstandingly well in many formats. In the Legendary Arena, Champion Stadium, and Full Force Battles, they can very quickly boost the entire team to max attack and special attack, saving valuable time and letting strikers go to work sooner while opening up more options for side damage dealers and tech units. In the Villa, the sheer power of Full Power! can be sufficient after just one use, or can be used to supercharge a striker that’s already dropped their own boosting moves in later stages.

Lillie & Clefairy’s grid offers most of its best nodes at 1 / 5. MGRs for both Disarming Voice and Moonblast and MPRs for Full Power! and X Accuracy All all come standard. The main draws for going beyond this are if you want to try a more offensive build, or Disarming Voice Unfortuitous 9 at 3 / 5. This node can give Lillie & Clefairy the ability to randomly drop enemy stats with every use of Disarming Voice like Professor Oak & Mew. Lillie & Clefairy’s grid also has Snow Shelter to let them operate on a hail team, which can work very well with Lillie’s mother and her partner, Lusamine & Pheromosa, if a hail setter is present. As with most support units, Vigilance is generally the lucky skill of choice here, but offensive sets appreciate Power Flux 3 or Critical Strike 2 if paired with some reliable critical rate support.

Lilie & Clefairy shine brightest if they can work with sync pairs that make full use of their skills right off the bat. For example, they are Kris & Feraligatr’s best friends, giving the latter the chance to always land their boosted Mega Kick while also hitting for max damage. They also work wonders with Lance & Dragonite due to their ability to both ensure that Hyper Beam always hits and max the team’s Special Attack. Sygna Suit Leaf & Venusaur have nice synergy with Lillie & Clefairy too, as their kits complement each other well. Sygna Suit Leaf can spread passive and active healing, while Lillie can boost Sygna Suit Leaf’s power and accuracy with occasional sync move recovery.

Finally, Lillie & Clefable can actually operate as a decent Fairy Type attacker with their sync grid, though they tend to be better at support and aren’t on the same level of power as Summer Lyra & Jigglypuff.

In general, yes! Just be aware of this sync pair’s somewhat niche utility before investing. If you like sync pairs that have lower accuracy moves, a lack of ways to buff their own attack/special attack, and/or have a lack of viable physical attack support units, then Lillie & Clefairy can definitely serve you well! Just note that if you don’t need the accuracy or random stat drops at 3 / 5, then Sygna Suit Blue & Blastoise may be a better use for your gems.