Zekrom, in many ways, is the single target equivalent to Garchomp. Although both are nothing more than above average but not totally self-sufficient damage pumps, each gains access to some of the highest dps numbers in the game when combined with the Tech they were built to work with (in this case, Luxray). The only thing keeping the monster that is a Zekrom on Electric Terrain out of the very top of this list is the one glaring weakness of the Zekray core: a complete lack of buffs to Critical Hit Chance. Without access to this essential offensive tool, and shackled at all times to a specific pair in order to reach its maximum potential for damage, Zekrom simply has very few options outside of Blastoise for tanking, healing, and crit boosting all in one slot. Nonetheless, in situations where all the right pairs are available, Zekrom's sheer potential for damage is undeniably one of the game's best. 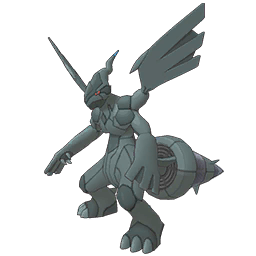 This legendary Pokémon can scorch the world with lightning. It assists those who want to build an ideal world.

Attack Up: Self
Confusion

Bolt Strike
Has a small chance of leaving the target paralyzed.

Applies the Free Move Next effect to the user when the Pokémon enters a battle.

Applies the Free Move Next effect to the user after using a sync move.