Although indisputably an excellent Sync Nuker at 3/5, the frankly unreasonable amount of investment using it for this purpose requires makes it extremely difficult to justify the effort (especially as the pair is nothing more than the game's least reliable status spreader without full grid access). If a late game Flying Striker is necessary, Mega Pidgeot's offer of comparable performance for a relatively miniscule cost makes it far the more practical option. On top of this, generic Sync Nukers outside of the Flying type niche are abundantly available through the game's main story, some of which are even more effective in that role than Togekiss itself. Overall, a more than solid pair for the die-hard Skyla fans out there, but one with too steep an entry barrier to become a prevalent part of the meta. 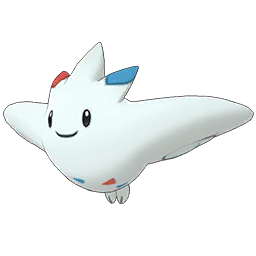 As everyone knows, it visits peaceful regions, bringing them gifts of kindness and sweet blessings.

Flinch
Sp. Atk Up: Self

Air Slash
Has a moderate chance of making the target flinch.

This move’s power increases if the target is affected by a status condition.

Raises the chance of inflicting status conditions—as well as inflicting the flinching, confused, or trapped condition—with the additional effects of moves.

Powers up moves when the move’s target or targets are flinching, confused, or trapped.