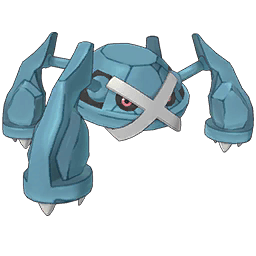 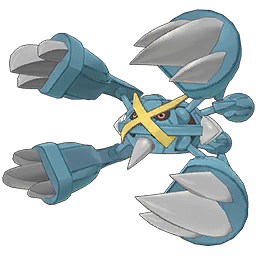 It boasts not only psychic powers but also fantastic strength. It grabs its prey with its four legs and holds them in place with its claws.

Attack Up: Self
Flinch
Defense Up: Self
Next 100% Critical Hit
Endure
Unity Bonus Damage Up
Stat Decrease Immunity

Hot on the heels of Garchomp, we have another huge contender for the game’s best Single Player Striker in Metagross. But that’s not all it's got going for it; Metagross is also an immensely powerful mid-late game Co-Op Striker. Impressive self-buffing, huge (for a Striker) bulk combined with the ability to endure incoming attacks, and a good old fashioned massive Attack stat make Metagross an incredibly powerful and versatile pair. Overall, the pair is a worthy investment for any player, regardless of which game modes they frequent, and a great option for players looking for one Sync Pair to main.

Even before Mega Evolving, Metagross boasts a more than respectable Attack stat and above average bulk for a Striker. However, once it completes a very quick buffing cycle in Single Player or switches in during the mid-late game in Co-Op, it gets to mega evolve into one of the hardest hitting pairs in the game. 460 is one of the highest Attacking stats in the game, and 530 bulk is enough to rival many Support pairs. Its only underwhelming stat is Speed, but extensive testing has shown that base Speed has only a negligible effect on Gauge recovery. It’s the amount of buffs to Speed active on the pair that make a real difference in that regard.

Impervious is one of the most useful passives in the game, and it allows Metagross to stack up huge amounts of Stat bonuses, even against the increasingly common in Legendary Events type of enemy that lowers your Team's Attacking Stats. A couple of strong Supports combined with Metagross’ already huge base stats and Impervious gives you a near-unstoppable force capable of taking down even Legendary Event Team Break Challenges without Supereffective damage.

Metagross’ lack of aoe damage means it either has to waste time and Gauge dealing with side pairs, or face status effects and other potential consequences of not doing so to focus on the boss. However, aoe damage is a fairly rare thing and isn’t essential for a Striker to do its job, so while it shouldn’t discourage players from using Metagross, it might be the thing that tips the scale in favour of Garchomp or another Striker for certain teams.

Metagross can benefit from a wide variety of Supports thanks to Impervious and its impressive bulk, but if one wants to make the most out of their Metagross, Speed, Attack, and Critical Hit Chance are the areas it appreciates buffing in the most. To this end, Supports like Oshawott, Dusclops, and Meditite make great partners for it. Alternatively, if your team would benefit from a bulkier Striker, Salamence can turn it into an extremely tanky bruiser who can take hits with the game’s bulkiest Supports.

Meteor Mash
Has a small chance of raising the user’s Attack.
Unlock Requirements
Unlocked by Default

Become Mega Metagross until the end of the battle.

Which Are Top Popular Tourist Places OF Nepal? Share Your Experiences!
@travels2nepal01 wrote: I am arranging a family trip to…
Personal Ranking of New Sync Pairs [in-progress]
@Sabaku wrote: Just wanted to give my personal opinion on…
Guzmeria, and a dream
@Libra_Elementia wrote: So, new banner came out. And with…
Code triner
@renatopc wrote: Code me 3395 6543 7484 …
Battle Villa & Legendary Pairs Trend?
@Someone_Person wrote: I noticed this while going through…
Read More