Despite its clunky setup phase and fierce Dragon type competition, Kommo-O's sheer lategame power and the game's current drought of top tier Special attackers are such that the pair is still an excellent option for Events and Legendary Arenas. In the Battle Villa, while Haxorus generally outclasses it in terms of reliability and longevity, if Support is set aside for it Kommo-O is very often the battering ram needed to break down a particularly difficult Stage and clear the way for a sweep. Overall, while its janky moveset and comparatively low stats keep it from the upper echelon of the game's offensive meta, once it gets going it can swing with the best of 'em, and that kind of dps can never be ignored. 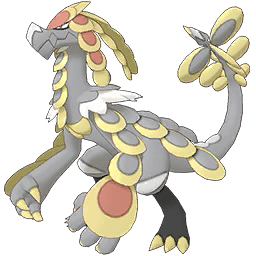 When it howls after finishing off its prey, the metallic sounds of its celebrating comrades can be heard from all around.

Paralysis
Sp. Atk Up: Self

Dragon Breath
Has a moderate chance of leaving the target paralyzed.

Reduces the sync move countdown by 1 when the Pokémon enters a battle for the first time.

Once per battle, charges the user’s move gauge by six when the user is in a pinch.