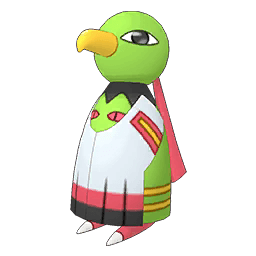 It’s said that while this Pokémon has the power to predict the future, it’s not powerful enough to change the future it sees.

Xatu fearlessly flies into battle, ready to defeat his enemies by using mysterious Psychic powers. Overall, Xatu’s stats are pretty good both offensively and defensively. To top it off, his Passive Impervious prevents any of his stats from being lowered, which makes his performance impressively consistent in all Game Modes. Specifically, Xatu is one of the only Pokémon that can boast about being able to clear Very Hard Supercourses on Auto.

Xatu’s Passive Impervious is his biggest strength. It not only prevents his base stats from being lowered, but it also applies to any stat buffs he receives during a battle. This is extremely useful, as opponents’ Sync Moves can make Pokémon massively weaker by removing their buffs. Being able to completely negate that effect makes Xatu both consistent and powerful.

Xatu’s Passive consequently makes his signature Stored Power pretty crazy. This move gets more powerful depending on how many buffs Xatu has, and since he can’t lose those in any way, in the long run he’ll be able to hit incredibly hard. He can even gain buffs quickly by using “Our Power is Limitless!” on any enemies that have buffed themselves!

Currently, Xatu’s uniqueness comes from him being able to perform very well in Auto Very Hard Supercourses. However, this doesn’t remove the fact that the Auto AI in this game is pretty bad, since it can lead him to make some stupid decisions – like using Air Slash instead of Stored Power – which could be pretty annoying in the future as harder content gets released.

Xatu is arguably the best Pokémon for Auto mode in this game. Considering his strengths, it’s important to keep in mind two things while building a team around him: having two Supports around him is essential, and it’s always good to bring a Pokèmon with very high bulk, so Xatu (whose bulk is quite high for a damage dealer) can avoid taking aggro from enemies. “Rosa & Serperior” and “Skyla & Swanna” are great and easily obtainable partners for him, since they Boost a lot of his stats, making him a flying powerhouse.

Stored Power
The more the user’s stats are raised, the greater the power of this move.
Confuse Ray
Leaves the target confused.
Our Power Is Limitless!
If any of the target’s stats have been raised, the user’s same stats are changed to double that amount.
Air Slash
Has a moderate chance of making the target flinch.

This move’s power increases if the target is confused.