Should You Pull #11: Cynthia & Garchomp 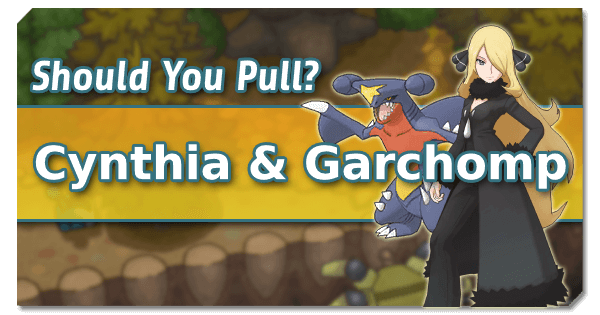 Attack Up
Crit Chance Up
Speed Up
Sandstorm Damage Up

Cynthia  & Garchomp, the waifu that you all have been waiting for is a ground-type champion from Generation IV, She is rather an AoE-orientated Sync Pair who will ensure to deal a lot of damage, but sadly doesn't do that well on Single Target. So one should use this Sync Pair when you wish to spam AoE's.   She is also a Limited Sync Pair, so this will be your chance to obtain her. If you do not get her, do note that she will return in the near possible future, as this game has promised that re-runs exists.

Earthquake is a move that has 100 power, at 1/5, which can be increased by 5 power each sync up for a total of 120 Power move at 5/5.  One of the greatest AoE skills in the game.  Compared with passive which allows Garchomp to occasionally raise it's speed, and do have self buffs to get additional Speed but also Crit Rate to definitely ensure the 3-gauge costing AoE skill will have it's Gauge Recovery at hand to keep on dashing damage

It is rather rare when a kit is so well balanced with each other that allows Cynthia to really work on her AoE damage dealing with constant crits and high speed, as explained above, one will get to frequently use Earthquake without having to wait much.

Cynthia can also use "X Attack" which sharply raises Attack by +2.  meaning that just buffing once will allow Garchomp to do 40% additional damage, and a 2nd time buff will increase it by 60% dmg, together with Critical Strikes the Earthquakes sure will be deadly.

One of the reasons that people should stay away from Cynthia is that Single Target damage is extremely low.  You wish to build a strategy where your main objective is to shut down the enemy before they use their sync move? Cynthia isn't a recommended Sync Pair then. Her Strength is AoE and her Weakness is Single Target

Received Slash when she could get so much more.

this needs to be expressed, usually when you Mega Evolve a Sync Pair their abilities changes slighty, they learn a new move tempoary.  Karen's Houndoom can use Dark Pulse instead of Bite.  Meanwhile Garchomp gets Slash. Sure does come with Ground Shift ensuring that Slash is a ground-type move, but in the end it's just Slash. of all the Normal moves and Ground moves it is very sad that her best single target move is merely Slash.

One of the greatest Team Synergy one can do is having a specific team such as Olivia & Lycanroc,  Leaf & Eevee and finally Cynthia & Garchomp, for this specific Synergy Team to work one has to give up Mega-Garchomp and merely use Cynthia for her Earthquake spam, here is the strategy.

Olivia starts out as usual rotation and goes ham, when enemy is about to use Sync Move, you will switch in Eevee, Eevee comes with Impervious so stats can't be reduced, so you will use X Attack and when your Sync Move is ready use it. Eevee will then buff entire team with all buffs +2. So with your X Attacks and Sync, your Eevee should now have +6 Attack. You can then use Potion to heal yourself up as Eevee will be tanking the next 2 enemy moves due to Sync Move taunts the enemy. Once they change focus switch into Garchomp, Eevee's Passive "Baton Pass" will pass the +6 Attack to Garchomp. Where you then can Earthquake spam them to their defeat.

Cynthia has one of the greatest AoE skills in the game, and self-buffs +  stats to ensure that the AoE department will always be powerfull.  If an encounter requires you to AoE then Cynthia should be your best choice, but do keep in mind that she might not be the best choice for Single Target combat.

Due to her AoE performance Cynthia will be worth pulling, so you should not miss out on getting Cynthia & Garchomp.

- Limited Sync Pair, for those who likes to collect don't miss out!

- The Waifu you always have been waiting for

- Time to scream DeNA Please and make this happen