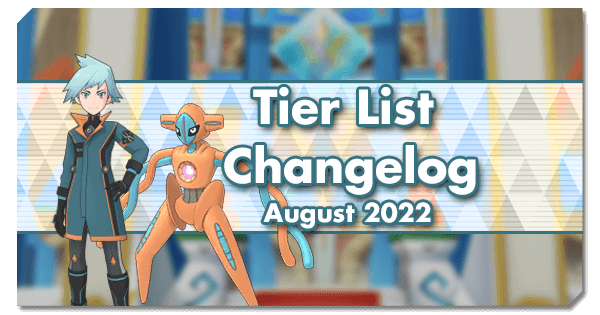 Welcome to the August update for our Tier Lists! This time, we got quite a handful of changes, as August got not one, but two updates, including one unit that needed to be ranked four times! So, let’s just not lose any more time for the last update before the 3rd Anniversary!

Tier 0 – Sygna Suit Steven & Deoxys-Attack have been added to the top subgroup by having instantaneous setup, the highest overall damage output in the game, and some of the best team comps available, only limited by its very low bulk. Lucas also now joins SS Lusamine’s subgroup.

Tier 1 – SS Giovanni has been moved to the top of the Tier, having now a pretty competent Sync Nuke with the addition of Ground Zone. SS Korrina has also been moved up after further discussion, and Cyrus now integrates the bottom subgroup of the Tier.

Tier 2 – SC Diantha has dropped to Tier 2 with her inferior damage output and smaller relevance of her self buffs with the constant addition of new supports. On the other side, the Tier has been slightly reordered to take into account less self-sufficient Sync Pairs being easier to support, like Leon.

Tier 3 – The top subgroup now also features Raihan and Silver. Cynthia and Zinnia have been moved up to this Tier in regards to their direct buffs, with Cynthia in particular fixing her main weakness in Sync nuking. Meanwhile, Marnie has dropped due to her unorthodox self buffs making her not that self-sufficient despite the apparent good buffs, and lack of consistency with Hunger Switch.

Tier 4 – Hala has been reapproached to Bea and Fall Hilbert with their similar niches, while Lance has been moved up.

Tier 6 – Blue & Arcanine moved slightly up with the addition of his EX, although keeping the same subgroup due to his lacking Nuke off-type and still not very impressive on-type.

Tier 0 – Dojo Gloria is now part of the third subgroup alone, and Maxie has been moved to the second subgroup with the access to Ground Zone. SS May is added to the last subgroup with her powerful sync acceleration, team support, and Sync Nuke.

Tier 1  – SSR Cynthia is now the solo lead of the Tier. The Psychic Terrain setters now integrate the second subgroup of the tier with the great additions of SS Brendan and SS Steven as partners.

Tier 2 – The Tier has been reorganized, dropping SS Leaf, Palentine Serena and SC Ingo, aligning them with Courtney. Meanwhile, both Deoxys - Normal and Deoxys - Speed have been added with their strong niche on Legendary Gauntlet being their most notable selling point.

Tier 3 – Bertha and Volkner have been dropped in favor of more consistent Sync Pairs, aligning them closer to Holiday Nessa.

Lower Tiers –  Karen & Houndoom are now part of mid Tier 4 recognizing her Bite builds. Plumeria has also been moved up, with her niches being similar to those of Karen. Noland and Kahili were added to Tier 6, being capable of some utility niches like tanking, generating gauge, and dropping defenses.

Tier 0 – SS Brendan has been added to the last spot alongside SS Dawn with his fast SpA and SpD buffs alongside dropping Sp. Def pretty well, although held back by his gauge and necessity of Sync to get full use of his kit.

Tier 2 – Falkner now leads the Tier with his extra consistency relative to Kiawe, with Classic Giovanni being ranked for similar reasons, exchanging the higher crit rate and better tankiness of Falkner for better gauge and faster buffs.

Tier 3 – Palentine Dawn has been moved down as Sp. Def drops start to become more common on Sync Pairs that can do more things than her, while Deoxys - Defense has been added to the bottom of the tier as an excellent tank that can buff both offenses and defenses for the entire team, but lacking crit, gauge, and EX Support.

Tier 4 – Skyla and Summer Hilda have been moved up a subgroup, although maintaining their overall position.

Lower Tiers – Sawyer has been moved down due to his lacking buffs without taking Sync, which has opportunity cost without his access to EX. There were some reordering also favoring defensive Supports like Swimsuit Misty and BP Morty while dropping Roxanne and Marley as their job can be more easily fulfilled by stronger units that outclass them. Drake and Liza have also moved up with their Sync Grid, with Drake in particular also receiving a EX, although his purely defensive support nature limits its use a bit.

This was quite a busy month with 2 updates and multiple Sync Pairs, but we’re finally done and ready to revisit the list after the upcoming Anniversary update!

Should You Pull? Steven & Deoxys