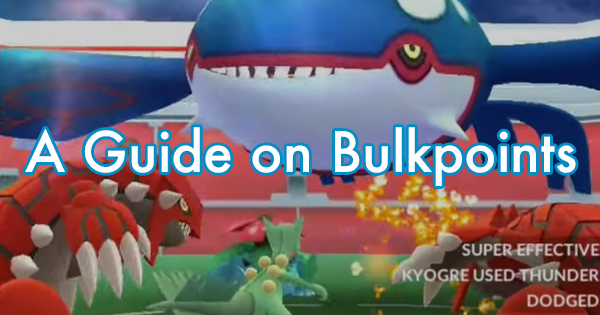 Being able to survive a single charge move from a raid boss is highly beneficial. It can allow you to use more charge moves before fainting, utilizing the energy from the damage; what doesn't kill you makes you stronger. More notably, it will prevent you from triggering the death-loop glitch if you dodge that charge move since the un-dodged damage won't KO you.

A bulkpoint is the level at which your Pokemon has just enough Defense and HP to survive a number of fast moves and a charge move from the enemy. Using our bulkpoint calculator, you can now easily identify the bulkpoints of your own Pokemon for each fight and determine their survivability on the charge move at different levels.

Before you continue, if you would like an audio version of the bulkpoint basics, check out this video.

Where Bulkpoints are Most Useful 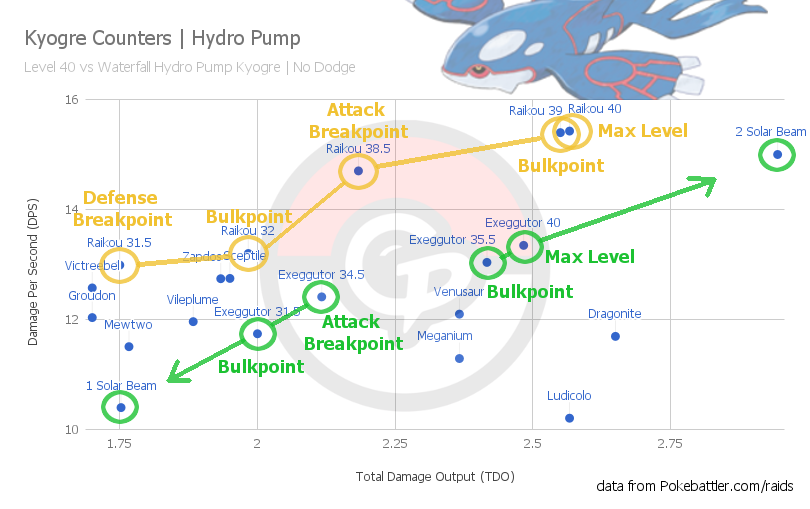 Bulkpoints are most useful where:

The most relevant example of these qualities is the Kyogre raid. Exeggutor will often faint before landing a second Solar Beam until it meets the level 35.5 bulkpoint, allowing it to survive 5 Waterfalls and 1 Hydro Pump. If your Exeggutor doesn’t cross the level 28 bulkpoint, it may faint to Hydro Pump before even landing a single Solar Beam. More proactively, if you power up Raikou to its level 32 bulkpoint, when it survives a Hydro Pump after less than 4 Waterfalls, it can immediately use the energy gained for another Wild Charge.

A more extreme example is using Gengar against the raid boss Alakazam. Until level 40, assuming Gengar has a 15 Def IV and at least a 13 Stm IV, Gengar won’t be able to survive 4 Confusions from Alakazam. When it meets this bulkpoint, not only will Gengar be able to more reliably launch another Shadow Ball before fainting, but it will gain one more opportunity for Alakazam to overkill Gengar with a charge move, increasing the longevity of your next attacker.

Where all these bulkpoints come up is confusing enough before you consider imperfect IVs. Fortunately, our calculator makes navigating them that much easier.

When using Pokemon with bulkpoints that suggest they’ll faint on a fast move after a charge move is used (ex. Pokemon that can survive 3-5 fast moves and 1 charge move), you may place Pokemon following them at an immediate disadvantage. For example, if your Raikou survived a Blizzard from Kyogre and fainted from the 2nd subsequent Waterfall, the next Pokemon that comes in will be 2 fast moves closer than usual to the next Blizzard. If your next Pokemon cannot survive a single Blizzard, it may get KO’d before it can even use a charge move!

This doesn’t mean you shouldn’t use Raikou to fight Kyogre. It suggests that you should be mindful when using Pokemon with lower bulkpoint ranges. In fact, if you place a Pokemon with a lower bulkpoint range immediately after them, it could set them up to survive the charge move and use the energy gained for more DPS! Consequently, this will also poise them to faint on a subsequent fast move, continuing the chain.

Another use of this “bulkpoint chain” is to increase the DPS of tanky Pokemon. The majority of a Pokemon’s damage comes from its charge move. Having a very tanky Pokemon experience a charge move sooner rather than later will kick start its own charge move use. Just keep in mind that it may lower its total damage output in the process.

Bulkpoint chaining has advantages and disadvantages depending on what your goals are and how your team is set up. In general, if you’re using glass cannon type Pokemon that can’t survive a single charge move, it would be mindful to place them earlier in your lineup. However, placing low bulkpoint range Pokemon next to each other can potentiate their advantage in DPS. Having a very bulky Pokemon directly follow a low bulkpoint range Pokemon may have the trade off of increasing their DPS by lowering their TDO.

If the bulkpoint chain is still a bit confusing, this video will take you through the steps.

Bulkpoints are most relevant when charge moves are predictable and fast moves are powerful. The survivability of Pokemon with bulkpoint ranges that exceed 7 fast moves and 1 charge move are less readily measurable, especially if the raid boss uses a multi-bar charge move. While we could design our bulkpoint calculator to tell you which levels you’d survive X fast moves and Y charge moves, it would be difficult to make the output useful.

Being aware of what level your Pokemon needs to be in order to survive longer in a fight, or dodge without triggering the death loop glitch, can have a bigger impact than its offensive breakpoint. Since these bulkpoints can change based on your Pokemon’s Defense and Stamina IVs, they’ve gone relatively overlooked up until now. With the bulkpoint calculator, you will now be able to prepare your teams for raids that much better!

One thing to keep in mind is that their use is pretty specific. Outside of scenarios where your Pokemon will be KO’d in 2 or less charge moves, their influence becomes more nebulous. For this reason, bulkpoints are only the saving grace of some raids, not all.