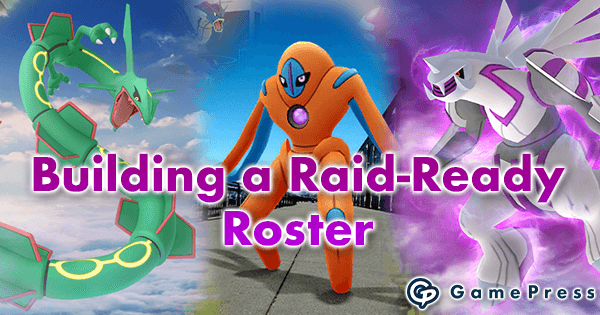 If you’re returning to the game after a long hiatus, or if you’re simply a novice raider, the world of raiding in Pokemon GO can be intimidating. When new raid bosses appear, myriad resources (including GamePress) publish raid counter guides and infographics. Use these 3 currently unobtainable Pokemon and this raid will be easy peasy! That’s not terribly helpful advice.

Not a problem! This raid is pretty trivial with other counters. You just need 6 maxed out copies of them to give you the best chance. Anyone can do it!

Or maybe not. Experienced raiders can take for granted their maxed out legendaries and A-tier counters. If you’re lacking in good Pokemon and starved for resources, then their suggestions are worthless. You’re not at that level - you still need to build a basic raid roster. With so many Pokemon in the game, where do you even start?

GamePress’s Attacker Tier List provides a rough valuation of the best raid-worthy species in the game. The long term goal, of course, is to accumulate legions of amazing legendary Pokemon. In the short term, you have to work with what’s directly available. Only about half of the entries on the tier list qualify as such: they are neither legendary nor reliant on moves obtainable for a limited time. 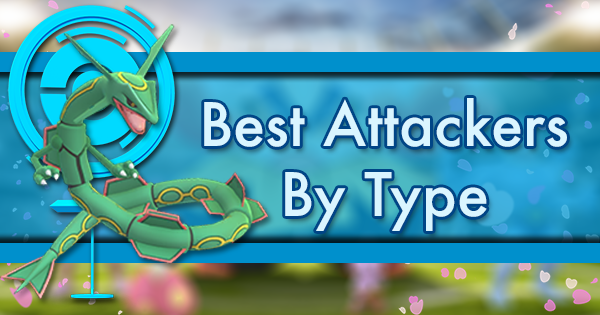 Despite these availability issues, there are plenty of choices to work with. Our suggestions below are divided into starter packs of common species and advanced picks of legendary, limited, or rare Pokemon.

As they say, it’s all about Machamp. Fighting is the only type effective vs. Normal and the best current type effective vs. Dark. It also counters Ice, Rock, and Steel to round out an impressive offensive profile. Many Tier 4 bosses are weak to Fighting. Machamp is overall the best of the bunch, but weather boosted Hariyama or Breloom will do in a pinch.

Soloing a Machamp raid is often a player’s first stepping stone into the world of high-level raiding. Unfortunately, the Psychic-types aren’t good for much else in the present raid environment. They are only effective against Fighting and Poison, which are rare in raids.

Tier 5 bosses are disproportionately Dragon-type. Most Dragons are weak to Ice, which has additional coverage vs. Grass, Flying, and Ground. Gardevoir is now a serious Dragon counter after the implementation of Charm, though its Candy can be hard to come by. The best Dragon counters are Dragons themselves, but they can be hard to get. Alolan Exeggutor is a competent alternative.

There’s no shortage of excellent Dragon species, but all are either legendary or very rare in usual gameplay. Rayquaza leads the bunch. Look out for them in raids and events, and plug into your community to find players willing to trade.

Psychic is the other type highly represented among Tier 5 bosses. Tyranitar dominates them with ease and frequently shows up in Tier 4 raids. Honchkrow is less good, but common in the wild. Weavile is in between. Gengar is fine, but its weakness to Psychic means you’ll need a lot more of them, and it only truly shines if it has a legacy moveset.

Origin Forme Giratina is by far the best overall attacker in this category. Mewtwo and Gengar both require legacy movesets to reach their full potential, which many will find hard to part with, especially in the case of Mewtwo.

Part of a Complete Roster

The following attacker types have some overlap between each other, but they represent the meta relevant types that cover Raid Bosses who don’t fall into the above categories.

Water-types are potent counters to Fire, Rock, and Ground, especially when weather is taken out of the equation. Kyogre dominates the field, with Kingler being the best unrestricted option.

Though slightly weaker in DPS to its competitors, the Grass type is blessed by the frequency of clear weather around the globe. Grass attackers counter Water, Rock, and Ground targets. Roserade is the best of the group, and unless you value diversity, it’s the only one you need.

Raikou is the daddy of Water-type counters, with Electivire being the best unrestricted option. Electric-types are also the best Flying counters in neutral weather, excepting Rampardos.

Though rare, Rampardos is highly sought after as it is the superior counter to Fire, Ice, Flying, and Bug types by a big margin. Among the unrestricted options, only Rhyperior is really worth using.

Fire-types scorch Bug, Grass, Ice, and Steel - which looks more impressive than it really is, as those types are not very well represented in the higher Raid tiers. Moltres and Blaziken are the apex Fire-types. Note that Blaziken is listed twice: the Blaze Kick version doesn’t require waiting for a Community Day, but it’s slightly worse than the Blast Burn version.

If you have everything else, you’re set for almost all relevant matchups. The only hole in team coverage is vs. Electric, which has a sole weakness to Ground. To date, Ground Pokemon in GO have poor moves, and this is their only relevant use case despite Ground’s impressive effectiveness profile.

Figuring out which Pokemon to look for is simple enough. The time consuming part of the team building process is getting those Pokemon. Some are common species in the wild, others may require visiting nests, and a select few are best obtained through raiding. In-game events constantly mix up wild Pokemon spawns and sometimes feature exclusive movesets (like Community Day). Event limited Pokemon can still be obtained through trading long after the event has passed.

Use the Weather Boost

Wild and raid Pokemon of a type boosted by the active in-game weather start 5 levels higher than they would otherwise. Weather boosted wild Pokemon also have a minimum 4 IV in each stat. This is influential for 3 reasons:

In the early stages of team building, any wild Pokemon boosted above level 30 is a blessing. Don’t be picky about IVs. Spend some Candy to evolve them and you’ll make a functional team with little effort. Save your Stardust for high IV specimens or legendary Pokemon that you want to max out.

A minority of Pokemon that are proficient in raids can be commonly found in the wild. Some are biome or weather dependent, while others barely exist outside of nests. Just about the only way to find species such as Sneasel and Electabuzz in large numbers is when they nest.

This progression has existed since the inception of raids in Pokemon GO. You build a team of Psychic-types to solo Machamp, then use a team of Machamp to duo Tyranitar, who in turn is an elite counter to many Tier 5 raid bosses. Machamp and Tyranitar are staples of Tier 3 and Tier 4 raids, rarely disappearing from the raid rotation.

You can efficiently build an anti-Machamp team by evolving Abra, Eevee, Exeggcute, and Murkrow weather boosted above level 30. Exeggutor and Kirlia sometimes feature at Tier 2 in the raid boss rotation.

Keep an Eye Out for Events

Pokemon GO’s frequent week-long events can sometimes make a coveted species spawn frequently in the wild. For example, Exeggcute spawns have been boosted in multiple prior events, and Fighting events in the past were notable for increased Machop spawns. Some events are limited to a few hours, like Raid Days, Research Days, or Community Days. Speaking of which…

Save Up for Community Day

Since January 2018, Niantic has hosted 3-hour long in-game events once a month that feature a particular Pokemon species. Usually, the final form of this evolutionary line learns a move that is restricted to this narrow window of time. Community Days may feature otherwise rare Pokemon (like Bagon) and introduce meta-defining moves (like Meteor Mash on Metagross). They are must-play events for dedicated raiders. For those who can’t play due to scheduling conflicts, they can still save up some Pokemon to evolve during the event.

In December 2018, Niantic reactivated the limited move window for a full weekend that featured all of 2018’s Community Day species. It’s reasonable to expect that this will happen again at the end of this year. If you’ve missed a Community Day, another chance may await, though probably not for awhile.

Trading is an incredibly powerful tool, not just for obtaining limited Pokemon, but also to reroll IVs and get Lucky Pokemon with discounted power up costs.

Lucky Pokemon are the foremost reason to trade generously. They require half the Stardust to power up and are valuable assets for the dedicated raider. For common species, the best way to get Lucky Pokemon is to trade a lot, as only ~5% of trades become lucky. For legendary or rare species, it’s better to use the Lucky Friends status, which can rarely activate after players become Best Friends with each other.

Plug into Your Local Community

Being able to solo every Tier 3 raid (except Shuckle) is an achievement. Sadly, most Tier 4 and Tier 5 raids are off limits to solo players. You’re going to have to rely on your local community, whether they consist of dedicated raiders or more casual players. The Silph Road's community map is one place to look, although not all local communities are represented there. If you raid with casual players, be patient and courteous. You can direct them to this article and maybe spark a deeper interest in raiding!

Fixating on IV perfection is one of the most common errors that players commit in Pokemon GO. It’s okay to avoid the power up button until you find a near-perfect specimen. You’re not getting that Stardust back. But until you’ve assembled a team of 6 perfect Machamp, you should be evolving high-level imperfect Machop for their immediate utility.

Using a Honchkrow against Machamp is no good if it doesn’t have the right moves. It should have Peck and Sky Attack; Brave Bird works but is suboptimal, and it has no business using Dark moves against a Machamp. An attacker with the wrong moves can be totally worthless. Consider renaming your Pokemon to indicate its moveset, especially if it can have sets of different types.

You don’t need to have an encyclopedic knowledge of every move in the game; that's what GamePress is for. But a basic knowledge of the type matchup chart goes a long way.

The CP number isn’t just for show. It’s a calculation based on hidden stats: HP, attack, defense, and level. The higher a Pokemon’s level, the higher its stats and CP. An attacker with perfect IVs and the best moves isn’t automatically ready to raid. It can’t do much without the stats to back it up. What level is sufficiently high? It depends on the matchup. Without any context, level 30 or higher is usually fine, but you should consult the raid guides and simulators.

On a Pokemon screen, its level is indicated by the point on the semicircular arc and the cost of the next power up. Overlay apps such as CalcyIV and PokeGenie can determine a Pokemon’s level with a tap.

There’s no point to having the right Pokemon if you don’t know when to use them. Niantic’s recommended team algorithm has always been a joke, though it has improved. If you want to maximize your damage output, make a battle party or two of your best counters. Resources like GoBattleSim and Pokebattler can help you in this regard.