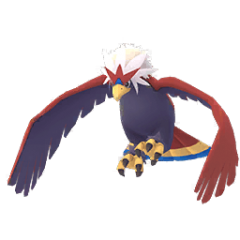 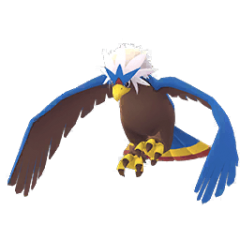 Initially introduced as a reward from the PvP side of Pokemon Go through its base evolution Rufflet, Braviary is unfortunately mostly a dex entry. Its unimpressive ATK stat and disappointing moveset leaves it little opportunity to shine in the raid/gym attacker scene, especially when much more powerful Pokemon already exist. On gym defense, its Normal sub-typing results in neutral damage from Fighting-type attacks rather than resisted damage, which doesn't help to discourage popular attackers.

Rock Slide is Braviary's primary charge move due to its lesser energy cost, respectable damage output, and relevant coverage, especially against its weaknesses to Ice and Rock-type Pokemon. Close Combat can also be chosen for its very high damage output and valuable coverage. Brave Bird doesn't get much as use, but benefits from STAB to deal considerable damage. Heat Wave costs too much energy to be viable.

Braviary is the second Pokemon to be introduced exclusively through Pokemon Go's PvP feature, Go Battle League, via its pre-evolution Rufflet. Unfortunately unimpressive bulk is the primary reason why it's held back from reaching the meta, as it can cause Braviary to lose certain matchups even with a typing advantage. Air Slash + Rock Slide is a respectable moveset combo, but Braviary doesn't have the bulk to fully utilize it.

Braviary's Normal typing can be useful in the Ultra League due to Pokemon with common Ghost-type moves such as Shadow Claw. Its fragility is still a major problem though, with many of its losses being attributed to it being outsped by Pokemon with faster movesets, or simply due to many meta Pokemon possessing superior bulk. Braviary's Flying typing isn't particularly valuable in this league, but its access to Rock Slide can be good against Fire-types meant to fight ubiquitious Steel-types.

With a max CP of 3088, Braviary would appreciate additional stats to compete better against the numerous legendary Pokemon in this league. To add more salt to the wound, Braviary's typing and moveset is of little use when combating the Master League meta, especially when other Pokemon can do its job more cleanly.