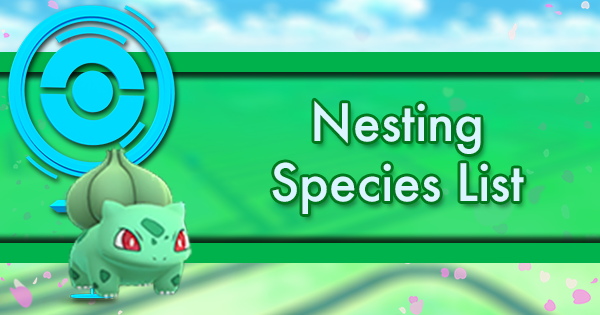 Pokemon nests can be difficult to keep track of. Reddit user u/Zyxwgh has here a rundown of Pokemon nesting habits.

While any Pokemon absent from the main list below should be considered "non-nesting",  these are a few categories that generally exclude a Pokemon from being able to nest in the first place. While Niantic could change this at the drop of a hat if they so desire, these qualifiers have been observed to be true since the system was discovered

Note that the list of Pokemon within these categories are not exhaustive, and simply examples

Support Activation my GYM
Hi! I hope for your support in activating my pokemon go GYM, please help me through…
Which shadow Pokémon are worth powering up and which are not?
So far I have only powered up Mewtwo and Metacross. Not a big fan of glass cannons,…
Mega planning
So my brain is boggled at sheerly how to handle these Mega Evolutions. Getting their…
Leveling up question
So, after I complete 5 more GBL battles, I’ll level up to 44. I have the 11 mil (?)…
Porygon 2 in GL
If you just want to see some good old fashioned fun, these battles are awesome. …
Read More