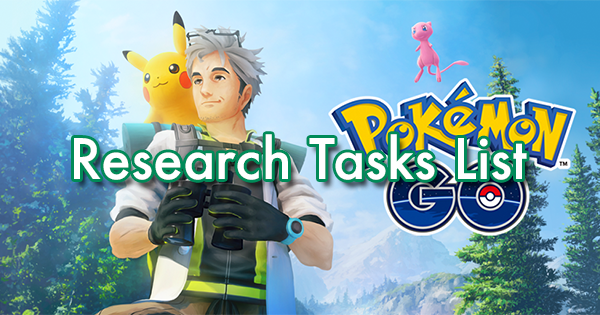 A Ripple in Time

A Mythical Discovery (Part 1 of 8)

A Mythical Discovery (Part 2 of 8)

A Mythical Discovery (Part 3 of 8)

A Mythical Discovery (Part 4 of 8)

A Mythical Discovery (Part 5 of 8)

A Mythical Discovery (Part 6 of 8)

A Mythical Discovery (Part 7 of 8)

A Mythical Discovery (Part 8 of 8)

A Troubling Situation (Part 1 of 4)

A Troubling Situation (Part 2 of 4)

A Troubling Situation (Part 3 of 4)

A Troubling Situation (Part 4 of 4)

A Colossal Discovery (Part 1 of 4)

A Colossal Discovery (Part 2 of 4)

A Colossal Discovery (Part 3 of 4)

A Colossal Discovery (Part 4 of 4)

! NEW ! Looming in the Shadows

Battle in a Gym 5 times.

Battle in a Gym.

Battle in a Raid

Use a Super Effective Charged attack in 7 Gym battles.

Use a Supereffective Charged Attack in a Gym Battle

Win a Level 3 or Higher Raid

Earn 3 candies while walking with your buddy

Power up a Pokemon 5 times.

Use 10 Nanab Berries while catching Pokemon

Use 5 berries to help catch Pokemon

Make 3 Excellent throws in a row.

Make 3 Great throws in a row.

Make 3 Nice Throws in a Row

Make 5 Curveball Throws in a Row

DownWithTTP is in love with the task system and has completed around 1250 in the first 6 weeks of availability despite primarily playing in the suburbs. Find out how he has been able to cycle through quests while attempting to maximize the value of each.

We received tasks at the end of March, and it has been one of the best additions to the game so far. Quests give players the opportunity to gain items/encounters while working towards Research Breakthroughs… a Legendary encounter and other rewards too!

Tasks are wonderful if you can use them correctly. For a plus user, any way to get more red balls is welcomed with open arms. For item starved rural players, they offer another way to get potions, revives, balls, and berries. For those who don’t put money in the game, the encounters can almost function like a junior incubator. Most importantly, they offer a fun new dynamic to the game.

A trainer can hold up to 3 tasks at a time. Also, trainers can trash as task if they do not want to try to complete it.

Trainers receive tasks from spinning PokeStops (not gyms). Each Pokestop gives the same task to all trainers during the day. If the reward is an encounter, all trainers receive the same species (though IVs will differ). If you get a task on Monday from a stop and don’t clear it until Tuesday, you will not be able to get a task from that same PokeStop on Tuesday.

Once you receive a task, you will not receive another one from that PokeStop. However, if you delete a task, you can go back to that stop later in the day to get it again.

Tasks give a variety of rewards, often based on the challenge you had to complete. Rewards can be encounters, Stardust, or items such as balls, potions, revives, TMs, and Rare Candy. Generally, more difficult tasks will have higher rewards.

Encounters from tasks are level 15 Pokemon with IVs of at least 10 in all 3 stats. After clearing an encounter task, you will be taken to the encounter. The Pokemon will not be weather boosted regardless of the in-game weather. You can run from the encounter and come back to it in the future.

Once you clear an encounter task, you can immediately collect a new task. Interestingly enough, you can save a large number of encounters! Some trainers do this and choose to catch them during a Lucky Egg or Star Piece session.

Master GO Battle League preperations and team composition help
@MikeClaus2001 wrote: I checked Gamepress, Pvpoke.com and…
Discussion: is it possible that your team determines who you face?
@NotCartoonJohn wrote: I’m a level 8. I was running a super…
#MakeTtarGreatAgain
@gpcaio wrote: I’ve been thinking of making this post for a…
No double transfer candy?
@Saelorn wrote: I’ve been looking forward to this weekend…
Rhyperior - Rock Wrecker
@aegis00000 wrote: Seems replica of weaker version of Blast…
Read More