Niantic, we need to talk about Shadows. 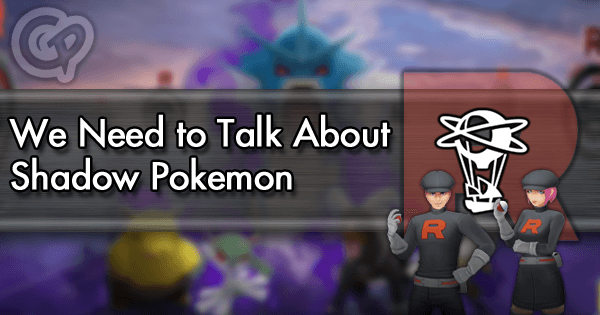 Shadow Pokémon have had an interesting history in Pokémon GO. When they were initially added, they were completely useless, and only existed as a path to get Purified Pokémon. Later on, though, when the “Shadows deal 20% more damage and have 20% reduced defense,” Shadow Pokémon took on a life of their own. While I will not be fully discussing the problems inherent to the power level of Shadows (20% is a lot in PvE), I do want to talk about their accessibility and usability, and what Niantic could be doing to fix those issues.

Initially, when Shadows (and even Purifieds) weren’t relevant, their accessibility was largely irrelevant. While it was cool to make the Purified counter in your Pokédex go from 0 to 1, as long as Frustration and Return were bad, they were just a neat little bonus from completing Rocket stops.

The real issues, however, started back in March, with the Rocket Takeover. During that event, there was a 3-hour period in which players could TM away Frustration. Put simply, this makes Shadow Pokémon go from nigh-unusable to the powerhouses they have the potential to be. However, it’s been (at the time of writing) over 3 months since we had this opportunity. Since this time, we’ve had the end of Go Battle League’s Preseason, the entirety of Season 1, and a significant portion of Season 2, and 4 Community Day events. And if you didn’t TM a shadow then, you’ve been completely out of luck since.

So what's the issue?

A non-TMed Shadow Pokémon is, at least in PvP, running at basically half capacity. While you can have a fast move and one usable charged move, your mon is hamstrung by a lack of coverage, a lack of baiting ability, or just a lack of a second usable move in general. While there are a few exceptions (Dragonite, Victreebel, and Gardevoir being notable ones), most Shadow Pokémon just….don’t really work while stuck with Frustration. Typically, if you want to use a Pokémon with only one Charged Move (please try to avoid this), you simply use whatever move you wanted. However, here you’re forced to unlock a second charged move if you want to have even one. For the rest of them, though, the longer and longer we go without a Shadow TM event, the less and less usable Shadow Pokémon get. If Niantic wants Shadow Pokémon to be a part of the game (and it seems they do), they need to do their part in helping the playerbase to use them.

Why bring this up now?

This past weekend was Beedrill Community Day. During an 8-hour period, any Beedrill you evolved learned the exclusive charged move Drill Run. Well...almost any Beedrill. If your Shadow Weedle was not TMed 3 months ago, you had no way of getting a Shadow Drill Run Beedrill. And that’s incredibly frustrating. Let’s walk through this timeline.

February 28th, Niantic made a post here describing events that would be taking place throughout March. Partyway through, they mention an event taking place on March 7th, when you would be able to TM away Frustration.

March 2nd, Niantic made a post describing updates to Shadow Pokémon. It was at this point when the 20% damage boost/defense reduction was implemented. Within that post, Niantic made this statement

During certain time periods, Shadow Pokémon might be able to forget the Charged Attack Frustration by learning a different Charged Attack with a Charged TM, though we haven’t figured out when that’ll be possible. Please stay tuned for more details.

March 7th, the Rocket Takeover event took place. There was a 3-hour period when you could TM away Frustration, using however many Charged TMs and whichever Shadow Pokémon you currently had in your possession

Jump ahead to May 18th. Voting for June and July’s Community Days was announced. The voting options were Weedle, Gastly, Squirtle, and Sandshrew. Out of those four, three were Shadow-eligible at one point (though Squirtle currently isn’t). Voting was set for May 23rd.

What you’ll notice here is, there was no opportunity between the announcement of voting and Weedle Community Day to obtain a TMed Shadow Weedle. Even if you knew someone who had one, Shadow Pokémon cannot be traded. This means that a reasonably informed player had no chance to prepare. If we walk this forward a bit more, the problem gets even more severe.

Let’s say that tomorrow, Niantic announces another Shadow TM event for this coming weekend. Great! You can now TM all the shadows you want. But it’s still not great. You can TM as many Weedles as you want, but when you evolve them, none of them will have Drill Run. If you want a Shadow Beedrill with Drill Run now, it would cost you an Elite Charged TM, about $12. Alternatively, your best bet would be to wait until the next Community Day wrap-up event, which (assuming Niantic follows their past pattern) will occur in December 2020, 6 months from now. So you get your Weedle, you TM it now in preparation, and then you have a shot at getting Drill Run on it at the end of the year. And all of this just…doesn’t seem fair to the players, really.

Honestly, those of us who’ve been waiting 3 months for another Rocket event don’t even have it the worst. As frustrating as it is, Japan, South Korea, and Italy never even got this event in the first place! This is a huge population of players who literally never had access to TMable shadows!

It would be wrong to just spend an entire piece complaining without offering solutions. While it’s too late to fix the Beedrill issue, there can be solutions to many of the other issues.

First and foremost, just...give us another TM event. While it’s understandable that Niantic doesn’t want to hold another full-scale Rocket Takeover event due to the constraints of COVID, we don’t really need that. All players really need is a way to take their existing Shadow Pokémon and make them useful. A random 3-hour TM window some weekend would have the exact same effect. If possible, it would be really nice for these to actually occur regularly. While “Frustration is always TMable” would be ideal, knowing Niantic it’s unrealistic. But anything less than monthly events just hurts the existence of Shadows as a part of the game.

Second, bring back some of the older, no-longer-in-rotation Shadows. Dratini, Snorlax, Seedot, Charmander, and Sableye all hold really interesting roles in various metagames, and they’re simply not available right now according to The Silph Road. While, again, I recognize Niantic’s reluctance to alter the Shadow pool due to COVID, returning some useful Pokémon to the available pool would be really, really nice.

Third, please make Shadow Pokémon tradeable again. When Shadow Pokémon were initially released, they just counted as special trades, but they were quickly made untradeable. Niantic explained in this Dev Insights post that this decision was to reduce the accessibility of Perfect IV Pokémon. Since a Lucky Pokémon has a minimum of 12/12/12 IVs, and purifying Pokémon gives them +2/+2/+2 IVs, it leaves lucky traded purified Pokémon with about a 42% chance of being Perfect. To quote Niantic,

There is some merit to this argument. The rarity of hundos is a large part of why they're exciting! However, preventing Shadows from being traded comes at a pretty severe cost. Because Shadows are actually useful, players will want to get good ones (whether that means good PvP IVs or good PvE IVs), and trading is a key part of how people obtain those. Where a bad IV version of most Pokémon is an opportunity to reroll, a bad IV Shadow is useless forever. That's just frustrating. Additionally, it means out-of-rotation Shadows (such as those listed above) are completely inaccessible. Want a Shadow Snorlax but don't have one? You're totally out of luck unless Niantic decides to bring it back. Making hundos less rare just doesn't seem worth the downside to the usability of Shadow Pokémon.

If Niantic wants Shadows to be a part of the game, that’s fine. At this point, they seem to just be a fact of life. However, if they’re going to be part of Pokémon GO’s ecosystem, they need to be treated as such, and at the moment, they’re locked away by a number of arbitrary gates preventing their usage. Their current handling is bad for the players, and bad for the game, and something needs to change. And soon.