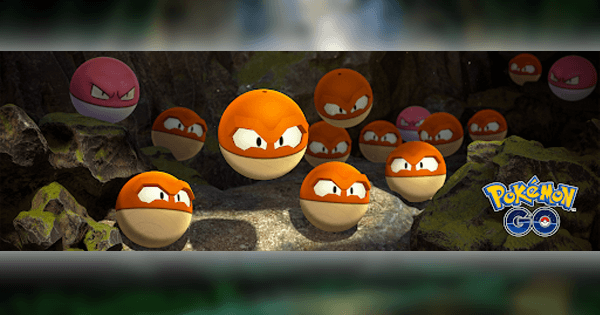 It's time to go back in time to get... some of the most recently released Pokemon. Pokemon Go is crossing over with the brand new game Pokemon Legends: Arceus. This time around, we're set to have encounters with Hisuian Votorb, the Electric/Grass Type Pokemon originally from the new game.

For some, Hisuian Voltorb may seem to have a rather odd design. Voltorb is a mimic of the classic Pokeball, so what's the point in this odd design? Well, Pokemon lore states that Pokeballs were originally made from a fruit known as an "Apricorn", and in Pokemon Legends: Arceus, players use old-fashioned Apricorn balls that look strikingly like Hisuian Voltorb, which brings the design full-circle.

Lore aside, Hisuian Voltorb is set to begin spawning in large numbers alongside normal Voltorb soon. In fact, it appears that the event is already in full swing across the globe! But unlike most events, we currently have no idea exactly how long this mini-event will last. The only clue is that they are stated to continue into the upcoming Lunar New Years event.

From Janurary 30 to February 1, all Rocket grunts will feature none other than Shadow Voltorb in their lineup.

This is an interesting turn of events, but let's not forget that Pokemon Go is still dabbling in the concept of theming with their seasons. So how exactly does all of this tie into our greater over-arcing story...?

Apparently, the Rocket Takeover event was nothing more than a distraction to get Willow and the Team leaders away from the focus of the story; the big door. They succeeded in doing this, and managed to get the door open. How did they do this when we've spent literal months slowly picking locks? I assume dynamite.

Anyway, what was left in the newly revealed chamber was a Pokeball. No, wait, it's actually a long-thought-extinct variant of Voltorb that Willow, a scientist, then proceeds to release into the world at large despite the fact that these anomalies in the Pokemon world almost have to be one of two things:

In all fairness, this is the world where Jurassic Park basically happened and we got the good ending for it, so I'm sure it'll all be fine.

Something unbelievable has occurred: Hisuian Voltorb have arrived!

Hisuian Voltorb—originally discovered in the Hisui region of the Pokémon Legends: Arceus game on Nintendo Switch—are now appearing in the world of Pokémon GO!

Help Professor Willow learn more about them and how they differ from the Voltorb of the Kanto region!

Voltorb and Hisuian Voltorb are appearing in the wild!

Hisuian Voltorb will appear in the world of Pokémon GO for the remainder of the Power Plant event, and will continue to appear during the Lunar New Year event as well. If you haven’t found them yet, now’s your chance!

Pokémon available at the beginning of the Power Plant event will also continue to appear in the wild.

The Season of Heritage Story Continues!

Team GO Rocket’s invasion was all a distraction! While Professor Willow and the team leaders were busy dealing with the takeover, Team GO Rocket swooped in with their own Electric-type Pokémon to force open the mysterious door!

The team leaders returned to find the door open, and whatever was inside it was long gone. All that remained was a crumpled-up piece of paper and a mysterious component indicating that this was all Team GO Rocket’s doing...

But Professor Willow noticed something off to the side of the chamber. Could it be—a Poké Ball?

Upon closer inspection, what seemed to be a strange Poké Ball was in fact a Hisuian Voltorb!

Hisuian Voltorb bear a striking resemblance to old-fashioned Poké Balls developed long ago in the Hisui region, but just what kind of Pokémon are they? What sort of place was the Hisui region, the land we now know as Sinnoh? And are these bygone Pokémon appearing because of Team GO Rocket, or is there some Mythical Time Travel at play?

Join Professor Willow and delve into these brand new mysteries!

All Team GO Rocket grunts will only have Shadow Voltorb in their parties.