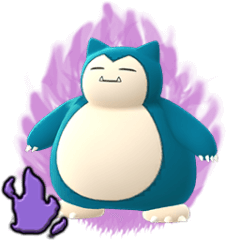 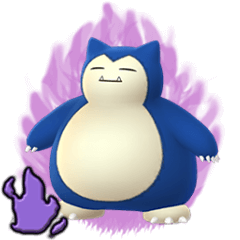 Unlike its non-evil self, Shadow Snorlax actually does have limited utility in raids. Despite its lack of STAB, its Shadow Bonus can make it a viable TDO option where its attacks can deal Super Effective damage, such as Vs. Giratina's two formes. It won't set any speed records, but it is viable at least!

On defense, it's a mixed bag. Snorlax has one main claim to defensive fame, and that's wasting the attacker's time. But Shadow Snorlax sacrifices about 1/5 of its bulk for higher attack. While it may score an added KO in some cases, it's generally not worth the added cost. Still, probably best to not purify a good Shadow Snorlax just in case it has more utility later.

Lick is Snorlax's only real option with regards to its fast moves. Zen Headbutt is really bad.

Body Slam is pretty much a requirement in order to use Snorlax for PvP. Without it Snorlax is unable to pressure shields effectively, and has no real options to shield-bait. Your secondary charged move of choice is going to depend on the format. Superpower is at its most notable in formats heavy with Steel-types (hi, Master League), though the Fighting-type coverage is very often relevant. Earthquake is meaningfully slower, but it's a solid nuke where needed, and it helps solidify a strong matchup against Giratina (among other things). Outrage and Skull Bash are generally considered outclassed, though they have seen experimentation and can catch your opponents by surprise.

Much like its pre-evolution, Snorlax can do well in PvP thanks to its excellent bulk, single vulnerability, and frequent spam of mostly neutral damage. Body Slam is pretty much mandatory for Snorlax, while its coverage move is up to preference. Do note, though, that Munchlax does often just perform better.

Due to the nature of how the Ultra League revolves around Giratina, Snorlax becomes a very considerable option thanks to its typing which laughs at Ghost-type moves. Generally speaking, Snorlax has some of the highest win rates in Ultra League when considering all eligible Pokemon possible, but has to be careful against the Fighting-type contenders which help cover Giratina's weaknesses (AKA Machamp, Poliwrath, Toxicroak). Also just in like Great League, Snorlax can perform even better than sims suggest if it's able to farm energy ahead of time without taking too much damage.

Snorlax has a max CP of 3225 which falls short of the more intimidating legendary Pokemon in Master League, but a very useful moveset gives Snorlax wins against most Pokemon. Even in most losing matchups Snorlax doesn't actually lose by too much, which means that Snorlax could possibly get wins off typically unfavorable matchups if it can farm a bit of energy beforehand. Regardless, Snorlax still needs to avoid the Fighting-types in Master League, but overall definitely carries its own weight and almost always puts up a good fight before going down.