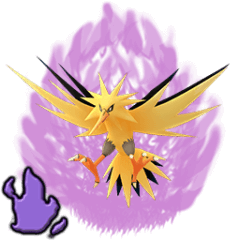 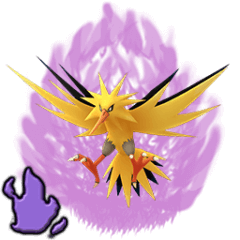 The boost from being a Shadow Pokemon makes Zapdos more viable as an Electric-type attacker, especially if its secondary Flying typing would resist attacks from raid bosses and gym defenders. Though expensive to power up, Shadow Zapdos isn't a bad choice if you're looking for variety in your team.

Drill Peck fills a dual role here, both as Zapdos's cheapest move (enabling baiting) and just as a solid STAB move. Pair this with Thunderbolt for the most consistent Electric damage option. If you're feeling spicier, consider running Drill Peck + Zap Cannon. This leaves you significantly more reliant on careful baiting, but if you can land it then there's no better nuke in Zapdos's kit.

Zapdos almost has potential in Great League. When almost every was Azumarill + Registeel, it was able to fill an interesting antimeta role in somewhat being able to handle both. However, with the rise of Galarian Stunfisk (which completely walls out Zapdos), the mon is significantly more difficult to run. Sadly, this thunderbird is not go.

Zapdos isn't bad per se in the Ultra League; it unfortunately just doesn't have a real place in the current meta. It does resist Registeel's charged moves, and deals super effective damage to the likes of Togekiss, Lapras and Poliwrath, but it can still struggle at beating them, and has really bad matchups against other major threats such as Giratina and Swampert. Zapdos has its niche use, but there are superior choices.

Zapdos shines brightest in the Master League, where its high CP leaves it unbound as a top Electric-type pick for the tier. The list of threats that it can eliminate grows in this tier, granting it niches against Kyogre and Togekiss in particular. However, once again, many other threats see it as a paper doll. Poor matchups against Melmetal, Giratina, and of course Dialga all leave Zapdos a fairly strong Pokémon in some contexts that just isn't worth the slot in GBL.