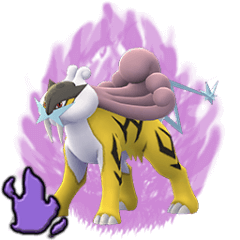 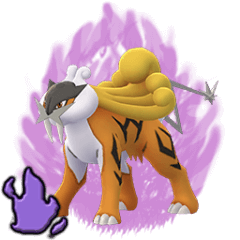 Raikou is the premier Electric-type attacker currently in the game. Raikou has a little less Atk than Zapdos, but makes up for it with access to Wild Charge, which more than makes up for the Atk disparity. Zapdos has advantages in matchups where its Flying typing confers key resistances, but barring a move rebalance, Raikou is both stronger and bulkier than its avian counterpart. Outside of raids, Raikou is also one of the game's premier gym attackers, and the unexpected addition of Shadow Ball, an attack that virtually any Pokemon would be happy to receive, clinched its position. Between these two moves, it can hit every Pokemon currently in the game save Shiftry and Cacturne for at least neutral damage, allowing it to clean up gyms single-handedly with ease.

Raikou has got both the best Electric-type fast moves, and the choice can be tough. Volt Switch is usually favored for the more consistent damage output, paired with great energy gains, while Thunder Shock does little damage by itself to double down on the spam of charged moves.

Speaking of those, the choice is easy here: Wild Charge is by far Raikou's best STAB option, and Shadow Ball provides key coverage against things that resist Electric and against the big Ghost-type threats of the upper leagues.

Should status effects/conditions be implemented in Pokémon go?
If it is ever implemented how do think it could be implemented into gameplay? I…
What in your opinion is a appropriate reward for reaching level 24 in a 3 month long GBL?
I believe it’s time for a huge upgrade to libre pikachu in GBL especially if the go…
Research breakthrought
Hi! Soon they will remember the 1st anniversary of the departure of the legendary…
GBL Season 6
Looks like Season 6 is more like we had the previous seasons with your rating being…
Lake Trio Raids Assist - Little Birdie
(topic withdrawn by author, will be automatically deleted in 24 hours unless flagged) …
Read More