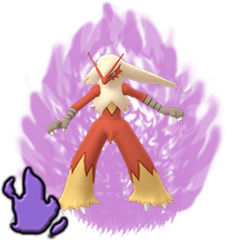 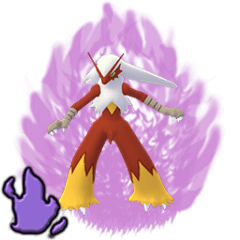 Blaziken is one of the best non-shadow/mega Fire Types in the game currently. With Blast Burn, it tops the DPS charts, though its TDO isn't the best. And even with Blaze Kick, it still has a great offensive presence that can't be ignored. Some players even take advantage of Blaziken's super cheap second move cost to run these two moves together and throw out a last second Blaze Kick if they know that Blast Burn won't be charged in time.

As a Fighting Type, Blaziken is usable, but not optimal. It falls behind the big-names of the type, and can't touch shadows. It's fine as a budget Fighting Type, but it does better work as a Fire Type.

We do recommend that everyone raises at least one Blaziken at some point, as Mega Blaziken is set to have the highest general DPS among all Fire Types.

Counter outperforms Fire Spin and also gives Blaziken some coverage in this moveset.

What has been anticipated for more than a year has finally arrived, in the form of 2 unique moves. Blast Burn is capable of massive damage (2.2 DPE) for only 50 energy, while Blaze Kick (1.38 DPE) is a mirror copy of the elemental punches and gives Blaziken some speed by allowing more smooth shield baiting. While this moveset doesn't necessarily help Blaziken cover its weaknesses, it does let Blaziken dominate its wins much more cleanly. Brave Bird can be elected for extra coverage, though STAB Blast Burn is more efficient even when resisted.

A more flexible but very limited moveset that gives Blaziken some coverage, though depending on the matchups this might not matter as much. If you have the legacy Stone Edge, definitely keep it and unlock Blaze Kick to have this option, but this moveset isn't as significantly different as the previous one. It should be noted that without Blast Burn, Blaziken can get different results depending on matchups.

Blaziken first gained popularity during the Silph Arena Kingdom Cup in April 2019, where its ability to "Counter" the ubiquitous Lucario and Bastiodon earned it a position on many rosters despite its slow moveset. With the addition of two useful moves added to its moveset on Torchic Community Day, Blaziken notably moves up the ranks thanks to a faster moveset. Blaze Kick is the main improvement, allowing Blaziken a low cost charge move option energy-wise, which removes Blaziken's reputation as a late game nuker and lets it brawl in early and mid-game. Previous losses that are now wins (under 1-shield scenarios) include Froslass, and almost all Grass-types. Blaziken's low durability is still its main drawback, as a high ATK stat distribution lowers its overall bulk and causes it have close results with Meganium instead of clean wins.

A higher CP cap benefits Blaziken's high Attack stat and results in more wins, though a lack of bulk still holds it back. Obvious wins against Steel are to be expected, though narrow victories against Grass-types are somewhat disappointing considering typing advantages, and Giratina can't be touched by it whatsoever. Overall a very interesting candidate, just be prepared to shield it well to preserve its limited endurance.

With a max CP of 2848 Blaziken doesn't really have adequate stats to compete well in Master League. Wins and losses are to be expected where type advantages apply, though Blaziken can return interesting results depending on shielding situations against Dialga. Just like in the other leagues, Blaziken almost demands shields to perform well.

Dear Niantic: You are no more
twitter.com PokeMiners @poke_miners Dear @NianticLabs …
Ultra unlock 3 - is this good?
Well outside my knowledge or blog reading, what the hell does all this mean? …
How long until they re-institute the Gym/Stop distances?
Because let’s be honest, it’s completely stupid to go back to pre-covid distances when…
Where is shadow eevee?
From the beginning of the game eevee has always been one of the most if not the most…
Incense effectiveness changes
I thought the 2x effectiveness for incense was part of the changes that Niantic…
Read More