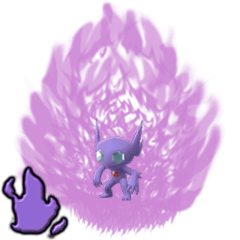 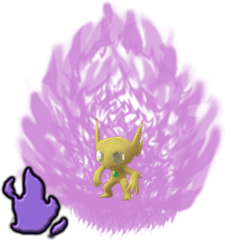 Shadow Sableye is an interesting little Pokemon, but its performance  is poor. As an attacker, it's even below Gastly just to put it into perspective. That said, it looks absolutely amazing.

Shadow Claw performs better than Feint Attack most of the time. Both have the same 3.0 DPT (Damage Per Turn), but the former leaps ahead with energy gains of 4.0 EPT (Energy Per Turn) compared to latter's 3.0 EPT. While this doesn't seem like much, in practice the difference is very noticeable, resulting in charge moves being used much sooner.

Foul Play is Sableye's best charge move, which costs only 45 energy and benefits from STAB. Power Gem is a poor move that costs quite a bit of energy to use, and can offer some coverage that turns certain losses into wins for Sableye. Shadow Sneak is one of the worst charge moves in the game, but with STAB has a few niche uses.

Sableye is a popular pick in Great League. Taking advantage of a Dark/Ghost typing which only shows a weakness to Fairy-types, and along with a strong moveset, Sableye gives a lot of value after a massive Stardust and Candy investment is made. Just keep in mind that due to its stat distribution, Sableye will lack some bulk in comparison to other top picks in Great League.

Sableye takes hard losses outside of Great League due to its maximum CP of 1476.

This ain't your place to shine, even if you have the shiny.