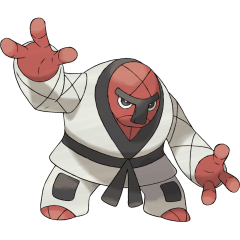 Throh was dropped at a time when Lucario received Aura Sphere and Conkeldurr hit the scene. To say the least, it never stood a chance. That said, its bulk is acceptable and it has two three-bar moves, so it's an ...okay... option on defense.

Throh was not blessed with good fast moves. Among them, Low Kick is its best option with a below-average set of 2 DPT (Damage Per Turn) and 2.5 EPT (Energy Per Turn). This alone hurts its viability greatly. Not even Body Slam (60 Power/35 Energy) can help it, and the fact that the absolutely horrible Low Sweep (40 Power/40 Energy) is its other best move basically kills it. It could run Focus Blast (150 Power/75 Energy), but it will probably faint to fast moves before getting it off.

Movesets can make-or-break a Pokemon, and this time it absolutely broke Throh. Don't bother raising it.

It just gets worse in the Ultra League.

Using Throh here is a great way to Throh the match.

Off Topic - Silly Jokes & Other Funny Stuff
On a different topic captpepperjack posted a funny cartoon about being older . So I…
Why do you want Shinies?
In the last few days I have been reading people’s search for shiny Pokémons. I am not…
A (kinda) new player to the pvp scene looking for some advice on GBL
Hey there, I’m new here and recently I started playing this game more, mostly due to…
Shiny pokemon question
Hello, I don’t know if there is an answer to this but any opinion will help me…
Second move on shadow Pokémon
Hello all, I got a shadow Magikarp today with good PVP IVs and was curious as to if…
Read More