Xerneas was added to Pokemon GO on 5/4/2021 with Tackle and Zen Headbutt as Fast Moves and relatively weak Charge Moves. This caused what would be a powerful Fairy-type Raid Attacker and PvP meta threat to be reduced to a complete joke. In the Xerneas and Yveltal trailer for Pokemon GO, both Pokemon were featured with their signature attacks, Geomancy and Oblivion Wing, which gives hope that Geomancy may be added to Xerneas in the future.

The article below details just how good Xerneas could be in both Raids and in PvP if Geomancy was added to Pokemon GO, as either a Fast Move or a Charge Move.

If Xerneas received Geomancy as a good energy gaining Fast Move it could easily be the top most Pokemon of the Master League Meta, rivaling and countering the mighty Dialga. Xerneas’ main perk hard countering Dragon-type Pokemon like Togekiss does, but unlike Togekiss Xerneas would also have the ability to threaten opponents with frequent, powerful Charge Moves. Thanks to Close Combat, Xerneas would even be able to overcome Steel-type Pokemon too such as Melmetal and Heatran, but it would still struggle with Metagross.

Running base simulations on PvPoke using Snarl or Incinerate as a Fast Move against the Master League Meta, Xerneas doesn’t look too hot. This is due to PvPoke’s algorithm constantly trying to bait with Close Combat as it has a lower energy cost than Moonblast, shredding its defense in the process. If you manually review the matchups using the sandbox feature, the only “true” hard losses Xerneas has are against Metagross, Ho-Oh, Rhyperior, Kyogre, and 2 shield Togekiss. Metagross and Ho-Oh being the obvious hard counters, and Rhyperior and Kyogre by virtue of their bulk, heavy Fast Move damage, and early enough Charge moves.

This isn’t to suggest other Pokemon don’t have play against Xerneas. Landorus Incarnate Forme, Groudon, and Giratina Origin Forme can beat Xerneas by baiting properly or having Xerneas bait poorly. Additionally, if Geomancy ends up being something more of an Incinerate clone (very slow Fast Move), the clunkiness could allow opponents to get the upperhand in uneven situations. Given Xerneas’ hard counters and tricky matchups, Xerneas wouldn’t completely dominate the Master League meta but would definitely loosen Dialga’s grip over it.

Imagining Xerneas in the Ultra League with Geomancy as a good energy gaining Fast Move is a bit easier, as Xerneas has roughly the same stat product as Granbull. At a base, Snarl Granbull isn’t that great but it is an interesting spice moveset that can throw off opponents expecting Charm. Unfortunately, Xerneas wouldn’t exactly have the surprise factor that Snarl Granbull does. To add, Xerneas would also be held back by not having Granbull’s Dark-type coverage with Crunch.

In the Master League, only Ho-Oh truly walls Xerneas’ Fairy+Fighting-type coverage. In the Ultra League, Xerneas has Venusaur, Talonflame, Charizard, and Gengar to regularly contend with. To make matters worse, unless Geomancy is an overpowered Fast Move like Counter, it would still have a rough time against other top meta threats such as Swampert, Registeel, and anything with Charm. So while the conditions of the Master League are perfect for Xerneas, Ultra League is just a little too rough for the Life Pokemon.

You would think slapping a good energy gaining Fairy-type Fast Move on Xerneas is all that it would take to make Xerneas the Top Fairy-type Raid Attacker in the game. Unfortunately, the Xerneas situation in Raids is further complicated by Moonblast being a 100 energy cost Charge Move that is vastly inferior to Dazzling Gleam. As a result, if Geomancy was a good Fast Move, Xerneas would still be several steps below Gardivoir and Togekiss. 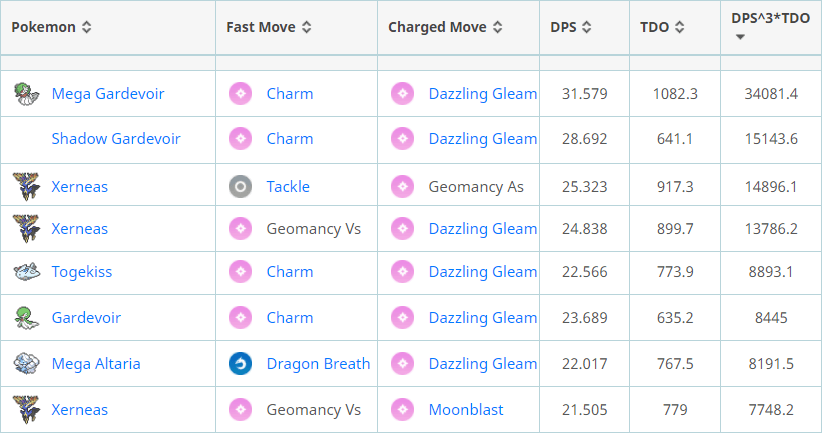 In order for Xerneas to be the Top Fairy-type Raid Attacker, it would need both a new Fast Move and a new Charge Move. That could be as simple as Pokemon GO giving it Geomancy as a Fast Move and adding Dazzling Gleam to its movepool. However, if Geomancy is instead an overpowered, 50 energy cost Charge Move (like Aura Sphere or Blast Burn) that would be more than enough to put it above the other Fairy-type attackers, despite having Tackle and Zen Heabutt. Given that Pokemon GO historically designs Signature Moves as Charge Moves, this is a more likely scenario than Geomancy as a Charge Move.

There is no mistake that Xerneas has room for improvement in Pokemon GO. If/when Geomancy is added to Xerneas’ movepool, be it a Fast Move or a Charge Move, it will have a profoundly beneficial effect on its performance in PvP or Raids. Geomancy as Fast Move could make Xerneas a top contender in the Master League, but would still keep it a step below Togekiss and Gardevoir in Raids. Geomancy as Charge Move could make Xerneas the Top Fairy-type Raid Attacker, but would almost be a death sentence in PvP.

Given how Pokemon GO has been handling Signature Moves, it’s more likely that we will be seeing Geomancy as a Charge Move. So while the Top non-Mega, non-Shadow Fairy-type Raid Attacker will likely be coming to Pokemon GO someday, Xerneas will need an additional buff to take the throne in PvP. Barring Xerneas receiving something akin to Lock-On, Xerneas being good in PvP appears unlikely to happen. That all said, the ball is still in the court. We will have to see what the future holds.