A solid mixed attacking sync nuker, plain and simply. Nothing outstanding, but what it does it does well and it even comes with a few neat tricks like Phantom Force's temporary guaranteed evasion and Shadow Ball's chance to lower enemy Special Defense. 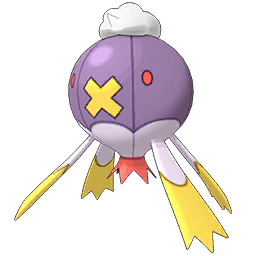 There’s a rumor that if you catch a Drifblim floating on the wind at dusk, you’ll be carried away to the afterlife.

Sp. Def Down: An opponent
Crit Chance Up: Self
Self Destruct on Death
Baton Pass

Sharply raises the user’s Speed when the user’s HP drops to half or below for the first time in a battle.