While the old standby Striker Lycanroc has been circumstantially affected by the encroachment of powercreep since release day, it still holds up surprisingly well in a vacuum and remains a truly excellent general use Striker. While the addition of monsters like Golisopod and Pherosma has deprived it of its former place as the game's best early game assassin, there still is and always will be a place for a pair who can, with little to no investment, be slotted onto any team carry players through most of the game's content. Although it's no longer the best at any one thing, above average bulk and Attack, a delightfully quick setup phase, and a still more than satisfactory dps output make Lycanroc one of the game's most versatile pairs to this day. 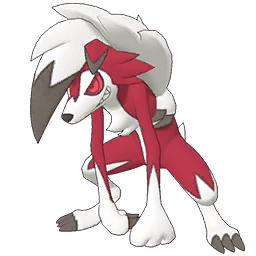 It has no problem ignoring orders it doesn’t like. It doesn’t seem to mind getting hurt at all—as long as it can finish off its opponent.

Attack Up: Self
Crit Chance Up: Self
Accuracy Up: Self
Sp. Def Down: Self
Speed Up

Lycanroc-Midnight is currently the most powerful single-target Physical Striker in the game, with only Mega Pinsir coming even close to its level of damage (both per move and per second). Lycanroc’s already ludicrous damage without needing to Mega Evolve, especially with its 100% Critical Hit rate Stone Edge (after only one move of setup), makes it a powerful threat right out of the gate. It can even keep up with its Mega Evolving peers as the game goes on thanks to its incredible Passive Amped Up 1, which allows it to easily build up the Speed it needs to sustain its devastating Stone Edge spam. Put all of this together and you have an excellent choice for any team in need of single target damage, especially considering that Lycanroc already has all the buffs it needs to work on its own, and as such can work with any support.

Lycanroc possesses the highest base Attack stat of any non Mega Evolved Sync Pair in the game, and above average Speed that when combined with the pair’s incredible passive quickly becomes some of the best in the game. Even Lycanroc's bulk is above average, which lets it tank Sync Moves from stage bosses much more effectively than most other Strikers.

Lycanroc’s unique move, “Hard As Diamonds!”, has the potential to become the single best boosting move in the game in combination with Stone Edge. As one of the only moves in the game that raises Critical Hit rate by two stages, it allows Lycanroc to reach 100% crit chance on Stone Edge while also patching up its poor Accuracy. Throw its passive, Amped Up 1, into the fray, and you have massive damage, blazing Speed, and perfect Accuracy after only one boosting move and with no support from teammates.

Lycanroc’s one big weakness is its complete lack of area of effect damage. Where other powerful Strikers like Houndoom, Pidgeot, and Alolan Raichu can use their powerful AoE moves to end games in seconds, Lycanroc has to be content with dealing its incredible amounts of damage to one target at a time.

Lycanroc’s ability to give itself all the buffs it needs to function without a support allows it to perform well on a wide range of teams, but it works best when combined with Support Sync Pairs who can allow it to get the ball rolling on its passive faster by replenishing the Move Gauge (e.g Serperior and Salamence) or raise its Attack and/or Speed (e.g Oshawott and Dusclops).

Raises the user’s Speed when the user lands a critical hit.