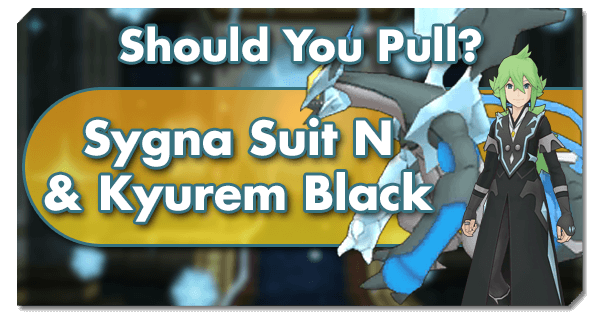 An offensive Tech unit that offers a variety of tools in its kit, such as debuffs and Sync Acceleration, but has problematic rotations and even can struggle at making use of all its tools at the same time.

As an Ice-type, SS Hilbert & Genesect will not only cover the type, but arguably better than SS N himself. Meanwhile Ghetsis & Kyurem also work very well as an F2P option. Next month will also feature SS Leon & Calyrex, an arguably better offensive Ice unit, making the timing of his release very unfortunate relative to his power.

The former king of Team Plasma, N’s popularity is absolutely unquestionable: not only he always figures among the top characters of any popularity poll around the world, Masters also hasn’t been shy of showing love to him, granting a Poké Fair, a Seasonal, a Master Fair (and for now, the only Unova Master), and a Lodge unit, with him even managing to grab both of the cover art legendaries of his games. Now, he’s back with yet another Poké Fair and another cover art legendary, this time for one of the sequels, Pokémon Black 2. If you play the competitive formats for the main games, you probably already know that Black Kyurem’s history hasn’t been the best throughout the years for what’s expected of a Pokémon of such caliber, but this is a game where Yamper is bulkier than Zamazenta, so how good has this Sync Pair turned out? Let’s find out!

The fusion of Zekrom and Kyurem starts strong with their stats, with an amazing 487 Attack, very solid 419 SpA, and a good 337 Speed. Defensively, 661 HP and 179 defenses gives Sygna Suit N a very similar bulk to Ghetsis & Kyurem, funnily - this isn’t a bulk particularly of note for a tech, but it leaves nothing to be desired either. His moves include Ice Beam, a weak 2 gauge move, while his Trainer Move, My Formula!, gives him +4 Attack and SpA on top of +3 crit, a very fast setup move. Freeze Shock is SS N’s main offensive move: a move that takes 2 turns to execute, but has a insane 300 BP alongside 30% chance to freeze and 90% accuracy - those type of moves tend to be very problematic, but as we’ll see later, SS N does have some passives to try to fix that. Finally, SS N has access to a Buddy Move, B Noble Roar, which drops the Attack, SpA, and Speed of all enemies by 2 stages, while giving the user Super Effective Up Next, Free Move Next, and one stage of Physical Move Up Next. This Buddy Move doesn’t have any MP, similar to Sygna Suit Red (Thunderbolt), so it can be used multiple times, but its activation condition requires the user to charge a move - in SS N’s case, Freeze Shock - and deactivates after it’s used. While it’s activated during the charge turn, it is important to make clear that you can’t use this move during the charge. Finally the Sync Move, World-Changing Freeze Bolt, scales with the enemy’s Attack drops.

The passives include Piercing Blows, a classic for the Unova legendaries and a great tool to have for legendary arenas, Hostile Enviroment 1 to help with applying freeze and paralysis, and most notably, Too Prepared 2, which makes Freeze Shock get a -2 Sync Countdown during the attack part of move - two turn moves don’t have any countdown naturally on the second click usually, making them delay normal Sync rotations, but in SS N’s case, not only does he avoid that, but even manages to get a Sync Acceleration. It is also worth noting, however, that you must hit the move to get the countdown - misses won’t have any countdown attached to them.

So, SS N is complex. Two turn moves are always polemic in Pokémon Masters, and SS N tries to address their weakness, but he still has a very slow rotation - especially if putting the Buddy Move into the mix, as he ends up attacking only once per sync cycle. There’s also a bit of lack of synergy among the kit itself, as the Sync Acceleration can be rendered useless if the user has to use 3 moves to get the acceleration each time. Low gauge usage (or even zero) does help as a secondary damage dealer, but the output ends up being hindered by the fact that the attacks take time to be fired.

Sadly for free-to-play players, SS N ideally wants ⅘, a very heavy investment. Peak Readiness 9 will make every Freeze Shock get a +1 Physical Move Up Next before attacking and works essentially as a 40% multiplier - since SS N takes so long to move, this becomes very important to actually make his damage more attractive. Luckily, 5/5 is not as inviting - Soften Up could even be considered a trap node, as you have to sacrifice the Sync Nuke nodes themselves to get it, while Ready for Anything 5 reduces damage while SS N is charging a move - cool, but not a game changer, and quite expensive too. Other useful nodes include Pinpoint Entry 1, as missing is mortal with SS N, while Demoralizing Sync 6 and Dirty Sync 6 enables SS N as a Sync Nuker - however, SS N needs help setting up his Sync Move, as a single B Noble Roar won’t have a very impressive Sync Move. Hostile Enviroment 2 can be useful for Legendary Arenas and situationally getting a freeze off, while Head Start 1 and Team Fast-Track 9 may see some use on specific teams.

SS N can achieve a decent Sync damage, but his setup is not easy. He’s a viable Sync Nuker, but often won’t be the first choice for the team, and turns charging Freeze Shock also can’t be interrupted for Syncing, worsening his rotations even more, so, if you want to save materials, the EX is not a big selling point of the kit.

What SS N most needs is damage, so Critical Strike 2 is a very clear choice with his lack of multipliers. Other passives can be specialized for other modes or specific strategies, but the benefits offered by more damage are generally outshining the different options one could consider.

SS N’s relatively low overall damage output does him no favors for 3v3s. While a good self buffing move and low gauge usage helps, 0 gauge pairs aren’t necessary anymore with any decent gauge support, making it a relatively redundant quality to have, and he doesn’t have great synergy with any pair in particular either. Piercing Blows can help on Extreme Battles, but he still won’t compare with most other Piercing Blows units - particularly N’s other units, as they also share the Unova Theme Skill.

Legendary Gauntlet is SS N’s saving grace, as low gauge usage, access to status (freeze, in particular, is very useful), self sufficiency, Piercing Blows, and debuffs make for a very strong kit for the mode. If you’re wondering where you would want to use him, this is where he shines.

To make use of his Sync Acceleration, two pairs shine here: Red & Snorlax and Raihan (Anniversary 2022) & Flygon have on-demand Sync Acceleration, and if timed correctly, can make multiple two turns Sync cycles when one of them is paired with SS N. Their differences lie in Red offering crit buffs for the third Sync Pair, Support EX, a tank, and Safety Net, while Raihan offers a Tech Sync Nuke that’s easier to setup and Physical Move Up Next.

Beyond that, SS N actually doesn’t have any Sync Pair that stands out as a partner. It’s possible to use Ghetsis & Kyurem, where both help each other’s multipliers and share a good chunk of Theme Skills, but neither has the biggest damage output. The Masked Royal & Incineroar will offer Defense debuffs, Speed support, and is a Tech Nuker himself. Iris (Champion) & Hydreigon can also help with the debuffs, although she has similar weaknesses to Ghetsis & Kyurem.

For Ice-weak stages, Sygna Suit Hilbert & Genesect will have good damage and activate the Ice Rebuff effect on the enemy, giving another damage boost to SS N. Finally, Hala & Crabominable and Leon (Holiday 2021) & Calyrex are both Ice Strikers that can be gauge heavy and offer an Ice-type Sync Nuke, so they can form a useful dual Ice offense team.

Sadly, SS N is not a great pull except for big fans of the character. He doesn’t stick out as the next step for Ice units, and for a limited unit, his performance is very underwhelming compared to any other released in the last 1.5 years. Players that focus on long Gauntlet streaks may see more value in him, but unless you aim for extreme runs, it’s probably better to save your gems when looking purely at his kit (but he does come with one of the best themes in the game!).