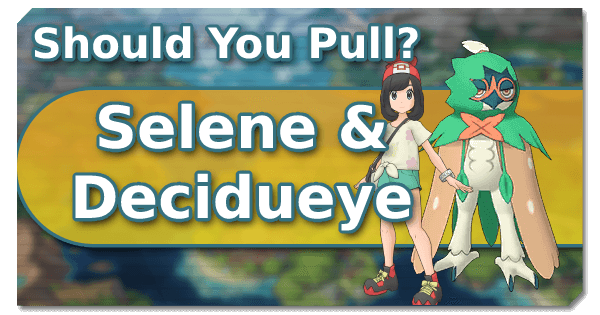 A solid Grass Type striker that’s sadly outshined by the competition in all but flexibility.

+Largely self-sufficient, and potentially very good as a secondary striker

Alola! Selene, the female protagonist from Pokemon Sun and Moon, is here with her Grass Type starter Pokemon, Decidueye. They’ve traveled far to make it to Pasio, so let’s all give her a warm greeting. But first, let’s get this out of the way: the restrained status inflicted by Spirit Shackle has no realistic effect in-battle aside from the fact that it buffs Dicidueye’s damage. Opponents can’t switch out when affected by it, but they don’t currently do that anyway, so it has no utility in-and-of itself.

Let’s be honest here: Selene isn’t a “bad” striker, but she is somewhat of an example of a systemic issue that Strikers as a whole currently face. While Tech and Support units have the potential to have wide utility in multiple fronts, even carving their own niches based on unique combinations of existing effects, strikers generally have one job and one job alone: deal type-based damage. While some sync pairs can somewhat break the mold and become generalists or go in other directions, Striker is the role that is currently most susceptible to power-creep, as when one sync pair deals more damage than another in the same type, they tend to be the better choice most of the time. Selene & Decidueye are prime examples of this, as they tend to have lower average Grass Type damage than Brendan & Sceptile, making them the inferior choice as a main striker.

But what about as a secondary striker (get ready, this term shows up a lot in this article)?

Well, with low move-gauge cost, passive and reasonable self-buffing speed, and even attack/defense/special defense/self healing on their trainer skills, they are actually quite competent in this role. In fact, they have the potential to complement Brendan & Sceptile in particular fairly well in order to create a synergetic Grass Type core that can rack up damage very quickly and efficiently. In fact, they can also act as a Ghost Type attacker in the same vein with Spirit Shackle, which is a viable attack in-and-of itself. It takes a bit more support, but it’s doable. By standing alongside another Striker, they can team up for a potentially devastating hyper-offensive play style. To demonstrate this, let’s take a look at their general performance in current game modes:

While Selene & Decidueye’s presence doesn’t have a huge effect on what options can or should be tackled, a dual-striker setup featuring this sync pair can prey on defensively weaker opponents and move in for an early kill, especially when paired with Brendan & Sceptile against a Grass weak stage. They have a solid presence here so long as their team has a strong enough tank and enough move gauge management potential to keep up momentum.

A solid overall choice, but the need to use Spirit Shackle in order to maximize damage can be a bit of an issue given the 9-opponent setup of these battles.

Selene & Decidueye aren’t the best here. They can definitely operate, but they aren’t anything outstanding when left unbuffed.

Again: they’re mainly here for secondary damage support, though it might be more advantageous to use a sync pair that’s capable of capitalizing on whatever weakness the arena boss is sporting.

As stated, the goal of using Selene & Decidueye should be to put them in the role of a supporting attacker, though we’ll also be considering the nodes conducive to its use as an effective main  attacker as well.

These are generally the most important nodes on Selene & Decidueye’s grid:

This is yet another sync pair that only has the opportunity to really shine at ⅗. ⅖ has some useful nodes and can operate, but ⅕ is virtually just running with a slightly enhanced base kit.

For Lucky Skills, just go for Critical Strike 2. It reliably boosts Selene & Decidueye’s damage on all fronts, and works wonderfully with their Sync Move’s boosted critical rate. Defense Crush 2 is an okay-ish runner-up skill as it can be helpful on select teams, but the damage difference is very noticeable.

As stated repeatedly: Selene & Decidueye are best when used as a secondary striker. And their best friends are Brendan & Sceptile. With doubled-up Grass damage and Sceptile’s famed self-reliance, this is a great combo. Dawn & Torterra can join in on the fun as well, producing a triple-grass core with Grass and Main Character theme skills activating as a result. If facing a Physical-attack focused, grass-weak stage, then this combo is absolutely brutal. Sygna Suit Blue & Blastoise can provide that pesky last +1 to Critical Rate in order to give Decidueye’s Sync Move the coveted 100% Critical odds while boosting basically everything else and tanking like a pro. Fast and consistent attackers like Gloria & Zacian are also good partners, as Selene & Decidueye have the tools to synergize with them and ensure that the grid is likely never an issue while also dealing solid secondary damage along the way.

Honestly, it’s probably best to skip this one. While they’re good, potentially devastating when played to their strengths even, they’re far from must-have. They’re going to enter the normal Five Star pool soon, so you’ll get them some day most likely, but the return on investment isn’t extremely high on this banner. The one asterisk on this is with Spirit Shackle, as DeNA may make the Restrained status more useful in the future in some way, but that’s a potentially large gamble to invest in currently.