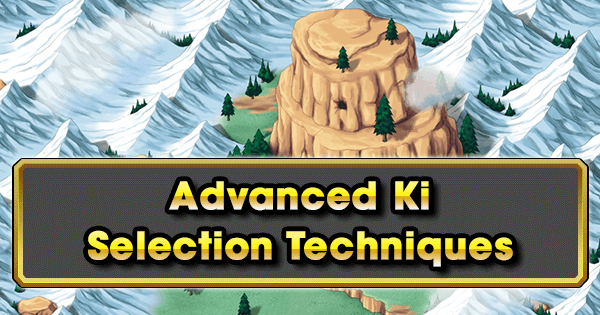 Every time Ki is obtained, the Dokkan meter increases. When the meter is full, the next Super Attack will be a Dokkan Attack, which deals extra Damage to all Enemies and replenishes some HP based on Damage dealt. Since the Dokkan Attack will always be launched on the next Super Attack after the meter is filled, managing meter growth is crucial in more difficult fights.

For example, in an event like Super Battle Road, unleashing a Dokkan Attack at the end of one fight when there are only one or two Enemies with low HP left will not be as effective as launching a Dokkan Attack at the beginning of a fight when all Enemies at full HP. This means that Ki selection should be made carefully throughout the entire event, to ensure that a Dokkan Attack is launched at the most optimal moment. Selecting the same color Ki Orbs as the attacking Card will make the Dokkan meter fill faster.

Goku has extremely low health, so the Dokkan Attack will have limited effectiveness. 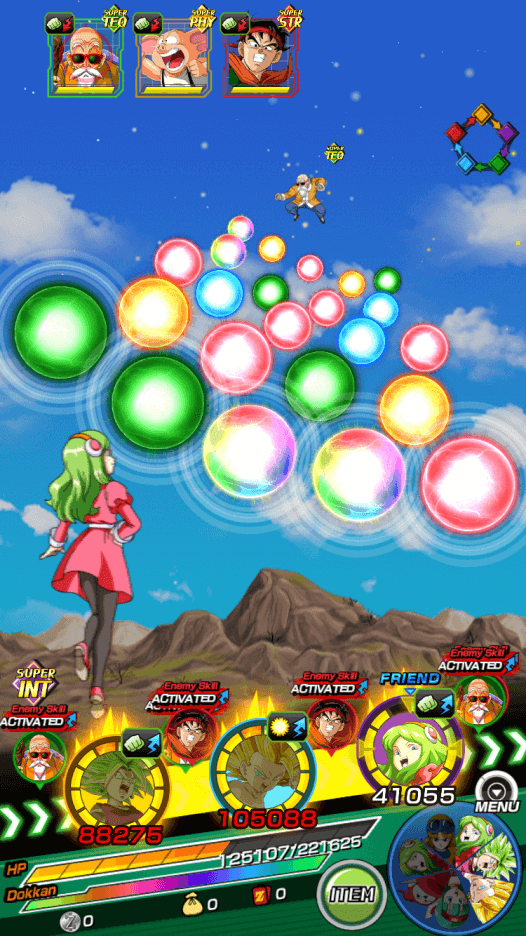 All three enemies have full health, which increases the effectiveness of the Dokkan Attack.

Selecting the same type Ki as the attacking Card will Heal the Team by a small amount. This can sometimes be useful for delaying transformations with HP-based activation conditions.

For example, if there is an LR Fused Super Power - Super Saiyan Goku & Super Saiyan Vegeta S.INT in the next rotation and the Team’s HP is right around 50%, then collecting some of the same type Ki to increase HP could be enough to delay the transformation for a later, more difficult portion of the fight.

The team's health is right around 50% with a fusion in the next rotation. If matching Ki orbs are selected, the health boost will delay the transformation.

However, increasing HP can sometimes have adverse side effects. If the Team’s HP is right around 70% and a UR Pinnacle of Fury - Goku S.STR is on the next rotation, collecting too much HP can prevent his transformation.

The team's health is just below 70%, which will trigger a transformation in the next rotation. However, collecting matching Ki orbs will stop the transformation from occurring.

Selecting the same color Ki when the Team is at full HP should only be done if it is the only way to ensure a Super Attack or if you are purposefully trying to build the Dokkan meter. Otherwise, the Orbs should be saved for the next rotation after the Team has received some Damage.

Selecting the matching Ki orbs here would be a waste, since the team is at full health.

LR Character in Next Rotation

Legendary Rare (LR) Cards are some of the most powerful Cards in the game because they usually perform a stronger Super Attack at 18 Ki--although, there are several LRs that follow a slightly different Damage calculation. Therefore, it’s usually best to save Ki Orbs for LRs in the next rotation--especially if they lack Team support or Ki links.

There is a TEQ LR character in the next rotation with no support, so saving the TEQ orbs will ensure they get a Super Attack

Orb Changers in the Next Rotation

Some Cards, like UR Non-Negotiable Resolve - Majin Vegeta E.STR and UR Desperate Showdown - Super Saiyan 2 Goku (Angel) S.AGL have the Passive Skill to change Ki Orb color. When a Card like this is in the next rotation, you can save the affected Orb types to optimize Orb links.

For example, if UR Wrathful Eruption - Majin Buu (Good) E.STR is in the next rotation, avoiding INT (purple) Orbs will allow Buu to turn them into STR (red) Orbs next turn, potentially setting him up for a devastating attack.

There is an orb changer in the next rotation, that will transform INT orbs to STR orbs. Saving all the INT orbs this rotation will ensure a large number of STR orbs next rotation for the nuker.

Giant/Rage Mode in Next Rotation

Some Cards like UR Devastating Punishment - Beerus S.TEQ and UR Phantom Majin Sealed Within - Tapion (Hirudegarn) S.AGL will automatically transform into a temporary form under certain HP conditions. They are extremely powerful in their transformed state, but often need to have a full 12 Ki Super Attack to reach their maximum Damage potential.

Unfortunately, these types of temporary forms no longer have any Links or support, making them entirely reliant on the board for Ki. If a transforming Card like that is in the next rotation, and you believe they will transform, it can be advisable to set up the board to ensure they get as much Ki as possible.

The team's health is below 50%, which will trigger a Giant Mode in the next rotation. Leaving the rainbow Ki orbs will make it easier for Hirudegarn to get Super Attacks.

Douglas Yan
Full-Stack Software Engineer by day, mobile game content writer also by day when things are slow. I don't play many games, but the ones I do play, I play a lot.