Tunguska brings with it a pair of non-limited Riders. The SSR, Jiang Ziya, is pretty good as non-limited Servants go. He’s a decently strong AoE Quick unit, especially in niche, and he brings some nice supportive utility as well. There are situations in which his supportive value can be his primary selling point—if you specifically need AoE buffs for Quick units, he’s a great option, and for players without a deep roster of supports he’s a solid pull—but for the most part, his value is as a damage-dealer. Jiang Ziya hits ST-level damage thresholds against Divine enemies, which is notable on the rare occasion where you’re fighting multiple Divines at once. As a whole, Jiang Ziya does a lot of things well but nothing spectacularly. He’s a great early Servant for new players building out their rosters, but he doesn’t have a ton of value for players with more established boxes due to his lack of specialization. 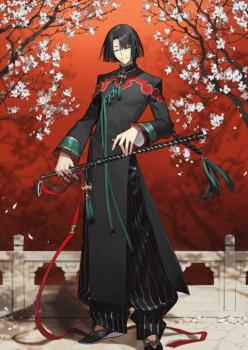 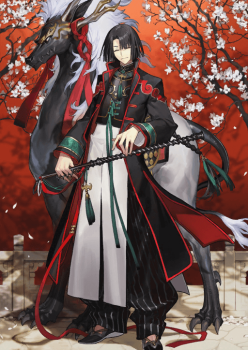 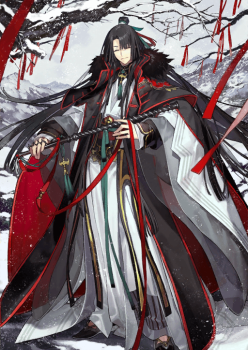 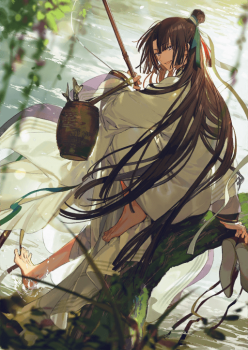 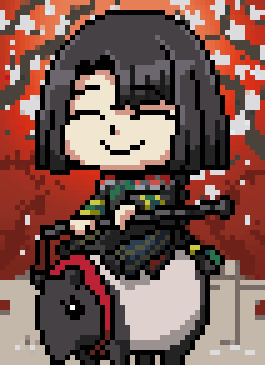 Fitting with his jack-of-all-trades kit, Jiang Ziya has decidedly middling stats, with pretty average attack and HP. As with the rest of his kit, it would have been better for him to have committed to a direction, but the balanced stats make him flexible, I suppose. His star gen is pretty good, with an AoE NP and good Quick hit-counts. His NP gain, though, is decidedly unremarkable. His Arts cards are solid-but-not-unusual, and his Quicks are not especially good, but between his batteries and his refund potential, he shouldn’t have too hard of a time getting access to his NP. His only passive is Riding, which props up his Quicks a bit and (more importantly) boosts his NP damage output. None of Jiang Ziya’s appends, by contrast, matters a whole lot. Mana Loading is always the most useful, but given how Quick teams’ batteries are spread out, it’s unlikely to matter much except in cases where Jiang Ziya’s running a CE with at least 30% but less than 50% starting charge. The Extra attack buff is okay for NP gain and damage, but it’s not hugely meaningful given Jiang Ziya’s focus on NP damage output specifically. Anti-Foreigner damage is extremely niche, but Foreigners do tend to be Divine, so this can make Jiang Ziya a gimmicky Foreigner-killer if you really need him to be.

Jiang Ziya’s mats are extremely easy, especially by the standards of a modern SSR. He only asks for two Lostbelt mats, one each for level 9 on his skills and appends, which makes him pretty accessible for newer players. New players are where most of Jiang Ziya’s value is anyway, so it’s nice that he doesn’t require much lategame stuff.

Jiang Ziya has three very strong skills, and if they synergized even a little bit more—if 2 and 3 were targetable, for instance—he’d be amazing. As it stands, though, all three are still very much worth leveling. Recommended skill order is 3>1>2.

Primordial Strategy is a great AoE buff, bringing buffs for all three major buff brackets. 15% isn’t a lot for any given type, but when you factor in multiplicative stacking, this is a better-than-50% damage buff to Quick NPs for three turns. The long cooldown time on this holds it back a bit, but all-in-all this is a great damage boost for Jiang Ziya himself, and it makes him a solid offensive support in a pinch as well.

God-Sealing Enforcement is a pretty straightforward skill. Skill Seal is not the best form of utility, and it can sometimes be detrimental by virtue of forcing the enemy to swing at you three times instead of using skills. The other effects are better, though, giving Jiang Ziya a 3-turn power mod against Divine and Demonic. Demonic is a narrow pool, but Divine is always a great niche and gives Jiang Ziya good damage against most story bosses.

Increase own NP Gauge.
Increase NP Gauge for all allies.

Philosophy Key is a 50% self-battery that also charges allies’ NP gauges by 20%. This lets Jiang Ziya use his NP easily and frequently, and it can help supports gain access to their NPs or help a DPS loop more reliably as well. There’s not a lot to say here—it’s an NP charge skill, and those are always good.

Dashinben is mostly unremarkable. It’s an AoE Quick NP with bonus damage versus Divine, and it also inflicts Quick Resistance down. Because he gets both power mod and supereffective damage (on top of good base steroids), Jiang Ziya hits really, really hard against Divine enemies. His refund is sadly not amazing, but with cards and batteries he can loop pretty easily. This makes him a good CQ pick when fighting multiple Divine enemies (or a Divine enemy and some lower-HP adds). The Quick Resistance Down effect lets Jiang Ziya’s damage snowball to a degree, and it also lets him further boost allies’ damage if operating as a support. This is a good NP, all-told, even if it doesn’t do anything special.

For farming, Jiang Ziya is mostly relegated to battery farm setups. With Kaleid and proper supports, Jiang Ziya can loop through batteries alone. Odds are you have better farmers, though—even Habetrot is likely a better option, assuming you’ve cleared LB6—so I won’t be devoting a whole lot of attention to farming setups beyond “they exist, though they mostly need Kaleid.”

Jiang Ziya is much more interesting in CQ contexts. As a DPS, he’s remarkably self-sufficient. He brings high steroids and a selfish battery by default, which means anything else you can give him is bonus. Any standard Quick setups will work well here—Skadi/Skadi/Oberon for blitzing, Skadi/Castoria for stall, etc. Skadi/Jiang Ziya/Castoria is a particularly good team, as Jiang Ziya’s battery helps the other two to use their NPs more reliably. You can also slot in any of the alternative Quick supports or semi-supports if you’re missing meta Support Servants or are having cost issues. Barti gets a special shoutout here, as Barti can push Jiang Ziya’s crit damage (which he’s missing otherwise) while also being able to leverage Jiang Ziya’s party buffs for good damage output himself, especially versus Casters.

Jiang Ziya’s supportive value is more questionable, but he can function in that role too. Given his long cooldowns and lack of survival tools, he really wants to be supporting fast-moving Quick teams. He’ll work best as a third-support for double Skadi teams, especially for players who missed Oberon and Santa Martha. You can also run Jiang Ziya/DPS/Skadi, or even Jiang Ziya/DPS/Jiang Ziya. In these teams, Jiang Ziya functions as a semi-support, outputting good damage himself while also propping up the DPS.

As a damage-dealer, Jiang Ziya benefits most from Black Grail, as always. Traces of Christmas is also a strong option, letting Jiang Ziya NP immediately with just his own batteries and boosting his effective NP gain. In supportive contexts, Devilish Bodhisattva is a strong pick, as it lets him NP immediately and increases the buff value of his NP. Poster Girl is also an option if you don’t want to worry about his long cooldown times—Jiang Ziya can take hits for a few turns before dying to make way for someone more sustain-oriented.

Jiang Ziya has decent crit access due to his star gen and Rider star weight, but he lacks crit damage buffs. As such, crit up CCs are a good pick here. You can also give Jiang Ziya anti-divine CCs to increase his firepower versus divine enemies, especially if you only plan to bring him against his niche.

Extra stats will help Jiang Ziya do his job better, by and large, but he’s not so impressive a Servant that gameplay grails are really warranted. I’d skip this one, personally, unless you really love the character. If you want to grail an AoE Rider, Habetrot brings a lot more value.

Jiang Ziya does a lot of things well. He has great anti-Divine damage, he’s a solid looper when cards are allowed, and he brings a fair bit of supportive value. Unfortunately, not going all-in on any of these things means his power ceiling is lower than it might otherwise be. He’s the kind of Servant who can always find ways to contribute but will usually be outclassed by a specialist. I’d say he’s a welcome spook but probably not a Servant to actively target unless you’re very new. 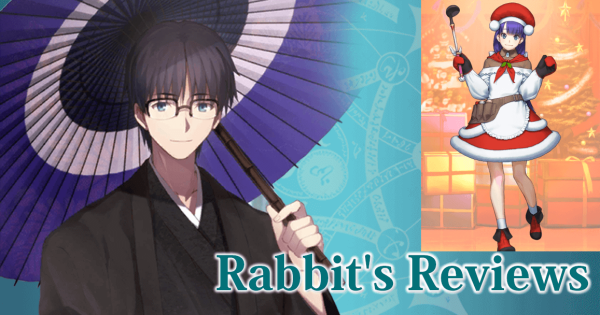 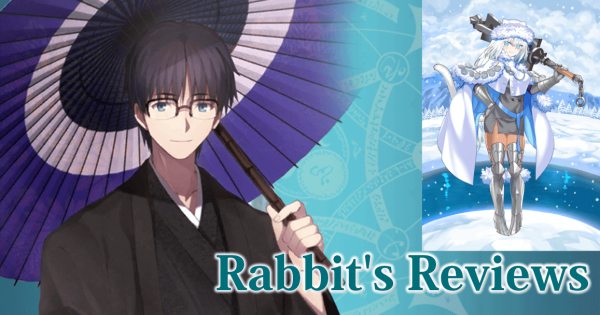 Busti’s Stall Diary Chapter #556: The Black haired boys
Black haired boys are pretty, stunning and nice twitter.com …
Which of the LB ally servants were your favorites?
Click to view the poll. I had other servants in the poll, but had to cut them out due…
What a weird GUDAGUDA Event
I mean GUDAGUDA is always weird with the Nobbu’s basically taking over the game but…
Fgo JP 2.6.1.5 update
Hello I tried to open the but the the game game the update notice which I didn’t find…
Golden Rule EX: A Hoarding Problem
Part I: The Beginning (Duh) At first it started out innocently. It was an…
Read More