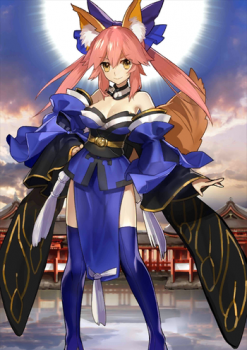 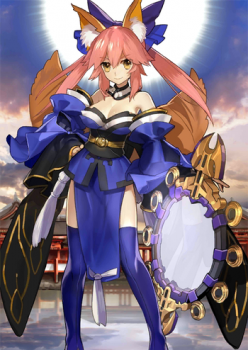 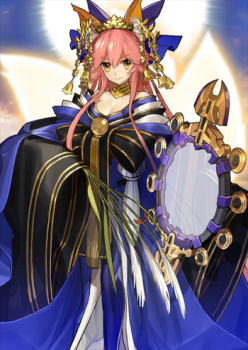 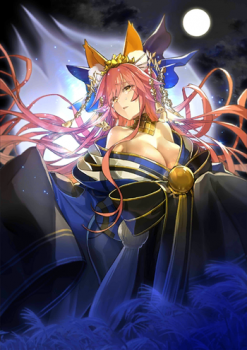 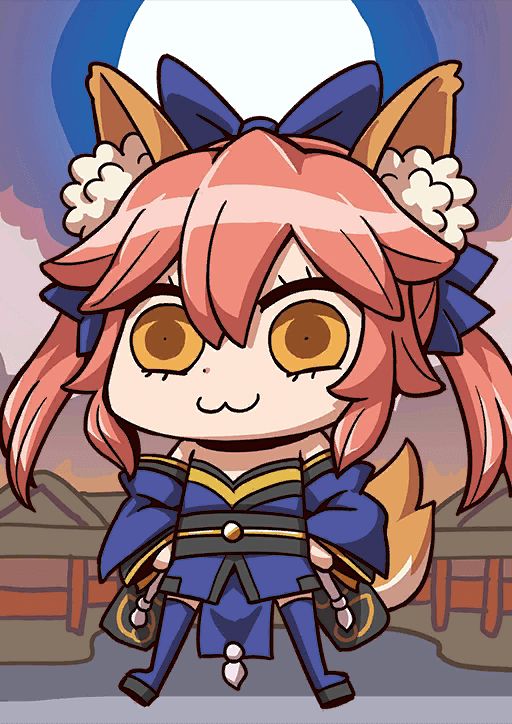 High chance to decrease one enemy's Charge by 1.

High chance to decrease one enemy's Charge by 1.
Increase all allies' NP Strength except your own (3 turns).

When equipped on Tamamo-no-Mae,
Increase Party's Arts Card performance by 15% while she's on the field.

After cutting off eight of her nine tails in atonement, the Heian Huli Tamamo-no-Mae now devotes herself to supporting good-intentioned and fortunate Masters with her cutting wit and foxy charm. Reflecting her self-styled devotion theme, this classy courtesan caster is the premier Arts-focused support who enables both skill-spamming strategies and high NP uptime.

Tamamo's main support comes from her strong Arts Buff skill Fox Wedding, and her NP that grants the team both a sizable NP charge, and reduces their skill cooldowns. These unique properties make her fantastic for consistent Arts-based NP teams, and after her Rank-up her Curse's teamwide NP damage buff only further solidifies her role as a key Arts support. Meanwhile, Tamamo's strong NP drain, teamwide heals, and strong self-defense buff make her invaluable in defensive strategies especially in combination with the lowered skill cooldowns and NP charge from her NP.

Unfortunately, the Sun Goddess doesn't particularly shine outside of Arts teams. Since Tamamo's NP charging potential is tied to her NP and isn’t available on-demand, her average NP gain makes her very reliant on Arts chains and even allied NP charging skills to quickly fill up her NP gauge and keep NP chains going. Furthermore, outside of Arts compositions, Tamamo's support is also much less effective as her on-demand buffs are rather specific and the bulk of her general support lies locked away in an NP that is otherwise more difficult to charge. For farming in particular this tends to lock her to supporting Arts Looping teams over traditional skill-based on-demand NP charging teams.

On the whole, Tamamo's kit is fantastic for supporting the likes of challenging content and Arts NP looping teams. While Tamamo is mainly reliant on Arts team compositions, her reliable Arts support for consistent NP's and skill usage is unparalleled and makes this devoted fox maiden a keeper for the long game for any Arts fanatic.

High Uptime on Skills and NP

In an Arts team, Tamamo can create a virtuous cycle of consistent NP's and skill activations through her own NP and Arts chains. Paired up with a teammate who can provide NP charging through skills, Tamamo's NP usage potential increases even further due the synergy between lowered cooldowns on NP charging skills, and the NP charge on her NP. In addition to increased NP uptime, the lowered skill cooldowns mean their buffs have a higher uptime as well.

Fox Wedding's dedicated buff not only provides a power spike to Arts-based DPS servants, but the 5-turn CD at max results in a fantastic uptime if combined with Tamamo's own NP. Post-Rank Up, Tamamo's Curse skill will also provide the team with a sizable NP damage buff. Even Tamamo's bond CE provides a useful 15% teamwide Arts buff, which synergizes nicely in native Arts teams. Overall, Tamamo's powerful and long-lasting Arts buffs make her fantastic for boss fights or loop-based NP farming.

Tamamo's combination of healing, guaranteed NP reduction, and up to 60% self-defense buff (30% for three turns) makes her excellent at surviving normal attacks all the while draining and stalling bosses. Contrary to her frail appearance, Tamamo's defensive bulk allows her to participate even with class disadvantage if paired with a proper damage dealer.

Tamamo's uneven hit counts and low base np gain result in average NP gain on her Arts cards, and subpar NP gain otherwise. Without Arts chains or allied NP charges, it's difficult for her to take advantage of her own NP to charge and reduce skill cooldowns as often as possible.

This fox's final destination is on an Arts team. Although her NP is almost universally useful, her dedicated Arts buff and reliance on Arts chains means she functions best on an Arts team, compared to other supports who have better card type flexibility.

A sizable amount of Tamamo's team support comes from her NP. Her lack of on-demand NP charge pushes her mainly towards survival-based challenging content or loop-based Arts NP farming. While her NP's "cooldown" is generally lower than normal skill cooldowns, achieving this is heavily reliant on team composition.

Despite her own self-defense buff, Tamamo's heals and stalling often requires additional teamwide damage reduction to keep everyone afloat in challenging content. Although Tamamo can heal with both her NP and Fox Wedding, Fox Wedding has the opportunity cost of sometimes having to choose between different targets to make full use of its Arts buff and its healing.

Although a fair amount of Tamamo's support comes from her NP, lowering the cooldowns of Tamamo's active skills will improve her consistency immensely in combination with her NP's skill cooldown reduction. Furthermore, maxing Fox Wedding as soon as possible is essential for unlocking her full Arts support capability. With all her skills maxed, Tamamo will be able to keep up her Arts buff and stall abilities with high uptime.

As an NP-reliant support Servant, Tamamo wants to build up her NP as soon and often as possible. While Starting NP Gauge will work great for jump starting her NP cycles, Craft Essences that allow her to build full gauge faster are invaluable for longer battles. For compositions with a supplementary NP charge support or in "Loop farming" strategies, Masters can use other Craft Essences better suited to the composition like Passive NP Gauge Per Turn or Passive Star Generation Per Turn.

Using Tamamo's NP last in NP chains greatly increases the total NP gained through overcharge for everyone. Masters who Sync NP uses will often be rewarded with even less NP downtime.

[JP] Servant Strengthening Quests 13
13th round of Strengthening Quests. 7 Strengthening Quests will be revealed over the…
Another salty spookfest rant
Forgive me, but I have to vent. How ■■■■■■ up luck do I have to have to fail rolling…
What's IGN?
I started using this forum since I want to know more about the game and be more useful…
Busti's Stall Diary Chapter #228: Use your Grails wisely!
It’s been too long! 64595646_p9_master1200800×960 291 KB 76567544_p12_master12001200…
Who was the voices in Lostbelt Trailer?
The main narrator is Goetia, but who was the voice speaking in the…
Read More