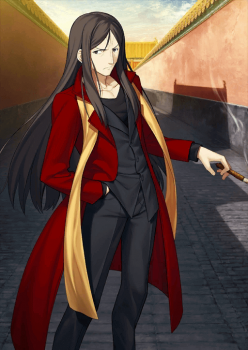 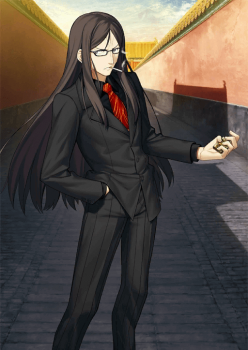 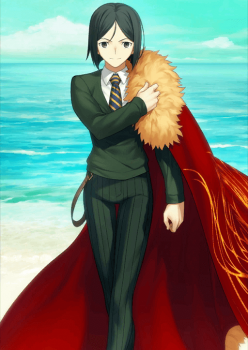 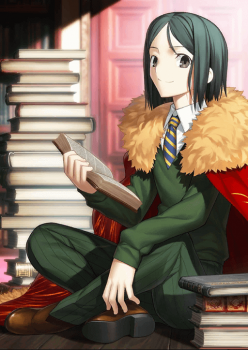 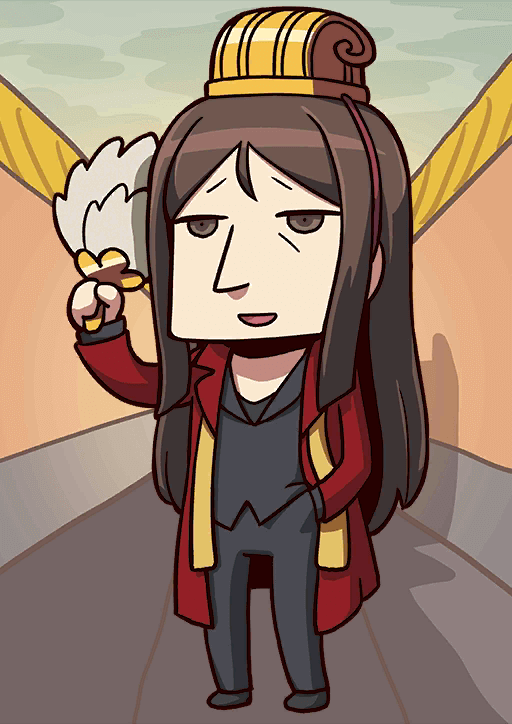 Medium chance to inflict Stun for all enemies (1 turn).

Medium chance to inflict Stun for all enemies (1 turn).

Relic of the King

When equipped on Zhuge Liang (El-Melloi II),
Increases Buster Card effectiveness of all allies by 15% while he's on the field.

‘I will only ever serve one person. Just think of me as another piece on the board.’

Zhuge Liang (Lord El-Melloi II), AKA Waver Velvet, is a man of many names and many talents, and he brings all of those talents to bear as one of the best supports in the game. Packing a straightforward but broadly effective kit, the Great Tactician is an Arts-based Caster who eschews buffing any one specific card type in favor of being flexible enough to fit into any team. Zhuge’s ability to not only buff the entire team offensively and defensively, but also charge their NP gauges at the same time, allows him to consistently elevate the performance of any team composition he finds himself in. To top his kit off, his own NP is packed with utility perfect for stalling and boosting team damage even further.

However, even the titans of Chaldea aren’t perfect, and Zhuge Liang is no exception. Though his teamwide buffs are fantastic in value, they are also saddled with slightly longer cooldowns. Furthermore, Zhuge’s own lack of healing or hard defensive options means the team needs to bring another servant to help with long-term survival, or simply blitz fights before that becomes an issue. Lastly, his single-target high-potency skill buffs Critical Damage, but Zhuge himself has no way of providing Critical Star support with his single Quick card and all-around low hit counts. Luckily, these weaknesses can be covered fairly easily via careful Craft Essence and teammate selection.

Considering his numerous strengths and high consistency, Zhuge Liang greatly improves any Chaldea he chooses to grace with his presence. Zhuge is one of the most useful farming Servants in the game, and is also consistently a standout pick for high-difficulty Challenge Quests.

Unlike some of the other notable SSR support Servants, Zhuge Liang doesn’t limit himself to supporting any specific card type. His full value is displayed in almost every team equally well due to the universal nature of basic ATK, NP charge and DEF buffs. No team would refuse these simple, yet effective basic stat boosts. His ability to supercharge one Servant’s Critical Damage by up to 50% for three out of every five turns makes him a good cornerstone of strong Critical Damage teams as well. Not for nothing is Zhuge considered the most adaptable Servant in the game.

Zhuge Liang boasts the best on-demand supportive NP charging capability in the game. Able to give the entire frontline 20% NP charge, and an additional 30% more to a single lucky candidate, he is one of the most valuable members of any farming team. The flexibility he grants in team composition and CE selection cannot be overstated, especially during events where the pool of choices is already pinched. The ability to double up by borrowing a Friend Support Zhuge and give any Servant in the game a full NP gauge on the first turn regardless of CE or other factors is just one of the many benefits he brings.

Zhuge Liang’s Unreturning Formation recreates his legendary Stone Sentinel Maze, and is exactly as cunning and effective as you would expect. Starting off with a guaranteed NP drain on all enemies, it has a moderate chance to stun all targets (scaling with overcharge) as well, making it a powerful stalling tool. Furthermore, it inflicts a hefty DEF debuff on enemies, which makes it an ideal candidate to start off NP chains, as well as inflicting a Curse damage over time effect. With his triple Arts deck, high base NP gain, and the NP charge on his skills, Zhuge can use this handy utility bomb fairly often, leaving enemies paralyzed and frustrated as they fail to use their NPs and take increasingly higher damage.

While the double defenses of Tactician’s Advice are extremely powerful, especially when combined with other DEF buffs, Zhuge is unlikely to survive being hit by an enemy NP and has no way to save allies from one either. As he lacks an Evasion or Invulnerability, or even a Guts, he relies entirely on his NP to stall out enemy NPs, unless an ally can cover for him. In addition, because Zhuge doesn’t have any other defensive buffs, the team is vulnerable during the 3-turn downtime of Tactician’s Advice at max rank. The final gap in his armor is that he brings no sustain whatsoever, meaning the team may run out of steam in longer quests.

While Zhuge Liang excels at granting NP charge quickly, and can step into any support role and do it well, he does lack the peaks of dedicated, specialized supports. Without his NP, Zhuge often cannot supply the sheer improved performance/damage a dedicated card type support might provide, nor can his defense buffs provide as much defense as a dedicated tank or stalling Support. Similarly, while he can apply a critical buff, he cannot supply the critical stars to go with it, instead requiring additional sources of Star Generation, whether from CEs, other supports, or a damage dealer who can create their own stars. In essence, Zhuge will greatly amplify all parts of a party’s performance, but cannot completely cover any aspect alone.

Zhuge Liang boasts a fantastic and well-rounded skill set. All three of his skills possess high numbers, strong effects and benefit greatly from leveling. Although the NP charge on any of his skills is not affected by skill levels, reducing their cooldowns is still essential for improving Zhuge’s performance in challenging content. While maxing all of them is important, the priority can vary depending on available resources and teammates.

Zhuge Liang can do his job of all-around team buffing very well regardless of what CE he’s equipped with, but some choices stand out as natural complements to his kit. Valuable CE choices include Passive Star Generation, Passive NP Generation, or NP Gain CEs in order to either enable his Critical support or cast his useful NP frequently.

Passive Critical Star generation is an extremely powerful effect on any supportive Servant, and this is doubly true given Zhuge’s crit buff and lack of other star generation methods. A Fragment of 2030 is the strongest passive star generation CE in the game, and can cover for Zhuge’s weakness in that area, especially if another frontline Servant also has a copy. His Rightful Place is weaker, but provides handy Starting NP Gauge instead.

If Zhuge is run as the sole support or if star generation isn’t required, the passive NP generation of Prisma Cosmos is a potent alternative. In conjunction with his skills and Arts chains, he should be able to NP regularly even if his command cards aren’t selected often..

Alternatively, if Zhuge takes a more active role, boosting his active NP generation is another way to improve his NP spam. Formal Craft boosts his NP gain and the damage on his most important card type, while Little Halloween Devil and Magical Girl of Sapphire grant starting gauge and improved overall NP generation.

If Zhuge Liang is used in combination with the Chaldea Combat Uniform’s Order Change or to clear a quest in a single turn, these CEs all provide instant access to immediate performance boosts for the team. Kaleidoscope will allow for instant access to his NP for further damage improvement, and for short quests will also handily outperform Prisma Cosmos in total NP gauge received.

Zhuge isn’t particularly dependent on any specific CE during low-difficulty or farming quests, where he mostly serves as a fast NP battery for the team. He is a strong candidate to hold Bond Point CEs like Chaldea Lunchtime or Heroic Spirit Portraits.

Lord El-Melloi II originally didn't possess the capacity or the history to become a Servant. But due to the extremely special circumstances of this Holy Grail War, he was successfully summoned as a vessel for Zhuge Liang, a Heroic Spirit from ancient China.

Zhuge Liang was well-known as a superior politician and serviceman during the Three Kingdoms era of China.
It is said that he played a great role in the small, weak kingdom of Shu in resisting the major kingdom Wei for a long time.

This Servant is neither El-Melloi II nor Zhuge Liang. Both of their strengths fused together and enabled this Servant to unleash powers he wasn't able to before. The thought patterns and emotions are based on the vessel, El-Melloi II.

Discerning Eye: A
Unique skill. This skill did not originate from Zhuge Liang, but rather from El-Melloi II. A variant of Human Observation, this skill allows the user to tell the observed target how to maximize their full potential.

[Unreturning Formation]
Rank: C
NP Type: Anti-Army
The legendary formation used by Zhuge Liang when he had his troops retreat.
Once anybody enters his stone sentinel maze, that person will be lost inside the maze until death.

Pseudo-Servant... A Heroic Spirit that cannot become a Servant for some reason, they have been summoned to the world by using a human body as their vessel.