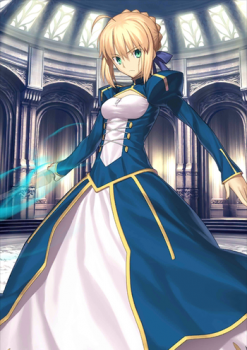 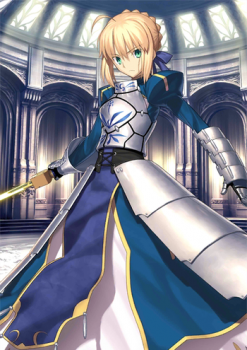 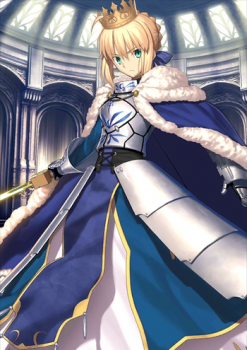 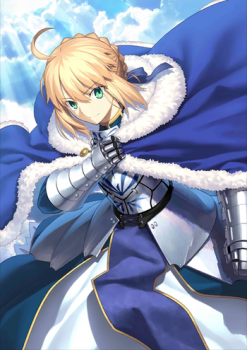 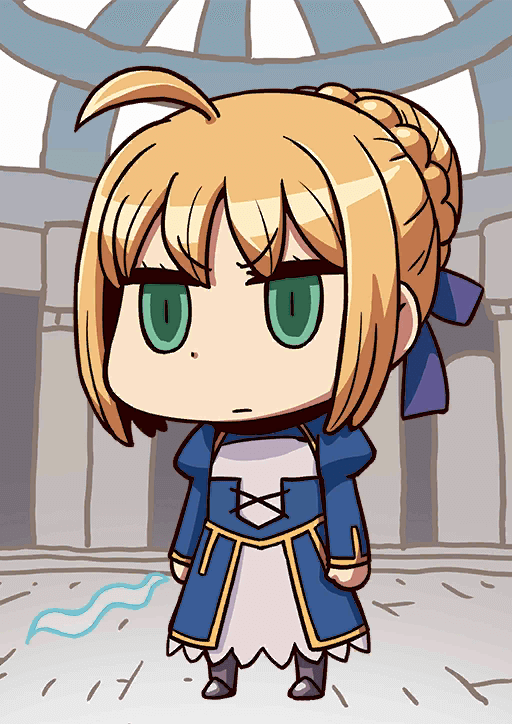 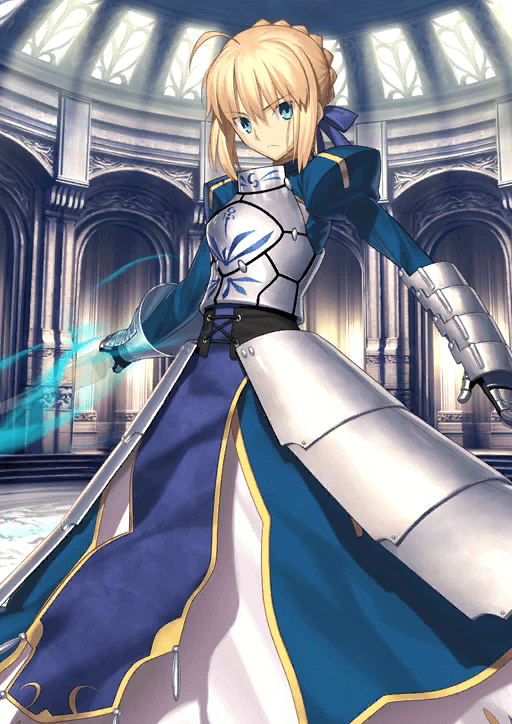 Crown of the Stars

When equipped on Altria Pendragon,
Increases attack of all allies by 15% while she is on the field.

Of all the flavors of Altria, the original's skill set is best described as "vanilla": nothing fancy, but enduringly reliable. Sporting one of the strongest self-buffed AoE Buster NPs and some team support, Altria can fit on a variety of teams with her strong wave clear ability.

While her skills aren't loaded with multiple effects, Altria's claim to fame is her straightforward strong Saber NP damage. Her Mana Burst-boosted NP and SSR stats are great for handily clearing waves, as well as providing the team with a decent Attack up from Charisma and perhaps a critical hit with Intuition. In addition, after her Rank Up Altria continues to be an even stronger farming Servant with access to a potent 30% NP charge.

In terms of generation stats, her launch-era hit counts and average generation stats are abysmal for generating critical stars despite the presence of a Riding passive, but offer reasonable uptime on her NP. Altria's balanced BBAAQ deck thus fits her kit well, helping her gain NP gauge through Arts Chains and enabling NP-Buster Brave chains for more damage. It is only after her Rank Up that Altria's NP up-time comes alive, as the combination of a 30% NP Charge on a 5-turn cooldown and a scaling 20% base NP refund makes her a potential NP-spamming juggernaut with support.

Unfortunately, while Altria has one of the higher HP stats in the game, in return her attack stat is on the lower side for an SSR Saber. Furthermore, Altria lacks powerful long-term boosts to her damage performance, nor does she carry any effect in her skill set that provides utility or grants her additional survivability. As a result, her performance during challenge quests often is highly dependent on the support of others.

Until her Rank Up, the King of Knights will find it difficult to outperform specialized Servants during challenging encounters for Masters with expansive rosters. However, once her Intuition is upgraded Altria will become a highly capable Servant that not only farms exceedingly well, but also turns up a stellar performance during challenge quests with her NP spam potential.

Altria's farming ability and challenge quest capability greatly improves after she receives her NP Charge Rank Up. Not only can she run a wider selection of Craft Essences for farming, but at max level her NP Charge combined with the NP refund from Excalibur’s Overcharge grants at least 50% NP gauge. Indirectly, the Rank Up enables Altria’s kit more NP usage options, granting her a potent niche in using her powerful upgraded AoE NP frequently with the right supports.

Altria's native Mana Burst and Charisma stack multiplicatively for up to 77% in self buffs, amongst the highest for AoE Sabers. Combined with her early NP Interlude, she has one of the strongest trait-independent AoE NP's without external buffs. Altria will usually be able to repress the enemies with her Holy Hand Grenade of an NP on the final wave of many quests.

In addition to her strong NP damage, Altria also provides some team support. Charisma provides a decent amount of Attack Up for the entire team for 3 turns, while Intuition provides a moderate injection of critical stars on-demand. Solid team support from an AoE Saber is relatively rare, and is a premium for her farming niche to help the team clear waves.

Once Altria receives her Rank Up, the NP charge added onto Intuition makes her one of the strongest farming Sabers. Her NP damage potential alone makes her an excellent farming Servant already, but the NP charge both makes her easier to use and allows for a more varied CE selection. Furthermore, as mentioned earlier, it can also be combined with her NP refund for impressive back-to-back NP potential during difficult encounters.

Lack of Unique Skill/Role Combination until Rank Up

Altria's vanilla skill set is straightforward and useful for a variety of stages, but her lack of a unique effect or ability to target a niche means that she won't perform as well as specialists in challenge quests, or farming quests with enemies weak to certain bonus damage. Notably, she relies on her teammates to overcome any problems that cannot be solved by pure damage due to having no utility at all in her kit. However, her Rank Up does increase her challenge quest viability by allowing for more NP uptime.

Altria’s biggest problem as a damage dealer is her lack of sustained high damage potential. Without access to long duration powerful steroids, or the ability to exploit any critical potential on her own, and with average NP gain and relatively low base attack, Altria struggles to keep up with her peers when it comes to challenging content. This downside is somewhat reduced by her NP Charge Rank Up as she gains a niche in unleashing her NP frequently, but her damage against single enemies remains problematic.

As none of Altria's skills provide sustain or survivability, she will need support for longer quests or high-damage challenge quests to cover this weakness. While she has a decently high HP stat and passive Magic Resistance, Altria also has many traits (i.e. Altria-face, Arthur, etc.) that make her more likely to be targeted/take effective damage from enemies than the average servant.

As an offense-oriented Servant specifically focused on her NP, Altria benefits most from maxing out Charisma and Mana Burst for stronger NP turns and card damage. Of these two skills, Mana Burst is usually leveled first for the greatest NP damage increase, but Charisma first is also viable for a more supportive option. Intuition is typically leveled last due to its weak effect, but becomes a powerful investment after Altria's Rank Up due to the added NP Charge effect.

Typically Altria focuses on unleashing her Buster NP and increasing its damage. This makes Starting NP Gauge, NP Damage Up, and Buster Up Craft Essences ideal. Starting NP Gauge not only allows for instant NP deployment, but also provides quicker access to potential NP looping post-Rank Up due to her NP refund. NP Damage Up works especially well to efficiently boost Altria's NP damage further through multiplicative buff stacking, while Buster Up Craft Essences not only buff her NP but also the damage on her Buster Command Cards as well.

Legendary King of Britain, and the King of Knights.
Her childhood name was Altria, but she has been known as King Arthur since her coronation.
At a time when chivalry was dying like a flower wilting away, she brought momentary peace and the last bit of prosperity to Britain with her sacred sword in hand.
In history books Arthur is male, but in this world she is a woman in disguise.

Height/Weight: 154cm, 42kg
Origin: Legend of King Arthur
Region: England
Alignment: Lawful-Good
Gender: Female
Does not know how to react to affection since she has been pretending to be a man.

An idealistic king who believes a good living and a good life is all anyone needs.
Protects the weak, punishes the strong, and is an all around a completely faultless person.
Calm and steady, she is always serious and a model human being.
...But, even though she doesn't say it out loud, she hates losing.
She doesn't go easy on herself, and feels great remorse when she loses.

Charisma: B
A natural born leader to guide armies.
Improves her own army's strengths on the battlefield.
Swears by complete honesty and selfless devotion.
Knights kneel to her justness, and the people can survive any hardship with her hope.
Her path of kingship is not to rule over a handful of the strong, but to save many of the poor.

[Excalibur]
Rank: A++
NP Type: Anti-Fortress
Sword of Promised Victory.
A weapon not forged by man, but a Divine Construct forged within the Planet.
The Noble Phantasm that is greatest of all sacred swords.
The true power of the sword lies within its sheath, which is said to be lost forever.

The Legend of King Arthur marks the end of the era of knights.
King Arthur repelled many foreign enemies, but was unable to save Britain.
Due to the betrayal of Mordred, one of the Knights of the Round Table, the country was split into two and the Knights' castle Camelot lost its gleam.

King Arthur defeated Mordred on the Hill of Camlann, but she suffered fatal wounds and fell to her knees. Before her last breath, she entrusted her sacred sword to her last confidante Bedivere, and left the human realm. After death, she was taken to utopia... Avalon, a paradise that exists beyond this realm. It is said she will return to save Britain once again in the distant future.