Bakin is about as generic as an Arts Servant gets. Despite her busy kit, there’s really nothing about her to set her apart from other general Arts loopers, which is particularly problematic when she’s directly competing with Habetrot, who’s both fantastic and free. Bakin has bad cards, standard NP refund, low damage, and limited ramp, and is locked with a 30% battery. She doesn’t have short cooldowns or much bulk, and she doesn’t have any notable utility to speak of either. She feels much more like a gen-pool SSR, in that she’s perfectly serviceable but has nothing to make her stand out from others in her role. As a limited servant especially, though, she’s not impressive.

At least her art is nice. 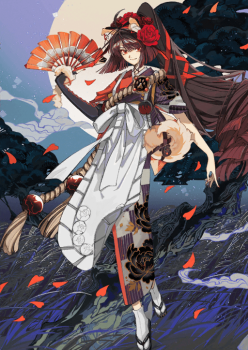 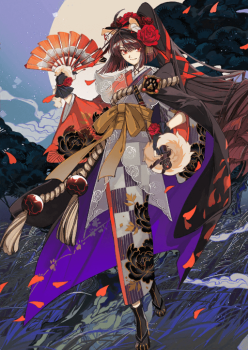 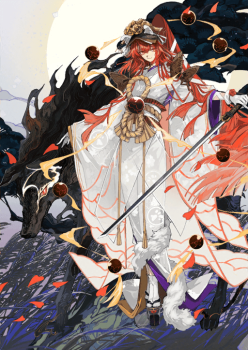 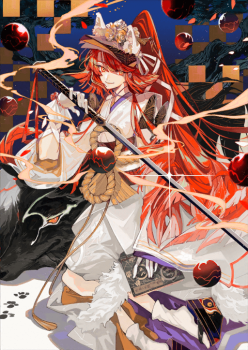 Bakin has one of the most defensive stat spreads of the SSR Riders, which is not ideal for a damage-dealer and is a large part of why her damage suffers. Her internals are pretty terrible—as an Arts Servant, star gen is not a strength, and her Arts and Quick cards are both among the worst in recent memory in terms of NP gain, meaning she’ll struggle to NP without relying on refund or batteries. For passives, Bakin has Riding, Magic Resistance, and Divinity, none of which meaningfully helps her. Mana Loading is the most important append as always, especially considering Bakin’s 30% battery. The other two are pretty skippable: Extra Attack Up doesn’t help much given Bakin’s bad cards, and anti-Foreigner damage is far to niche to be worthwhile, especially with Taisui getting full class advantage against the class and being recent and free.

Bakin has very easy mats, at least. She doesn’t need excessive numbers of anything hard to get, and most of her mats are from earlier chapters. While Bakin isn’t a great Servant, she’s relatively cheap to raise, at least.

For as many effects as Bakin has on her skills, her skillset is remarkably plain. Recommended skill order is 1>2>3.

Increase own NP Gauge.
Increase NP Gauge for all allies except self by 10%.
Gain Critical Stars.

Svabhava is a mostly-bland 30% battery. Batteries are nice, though it’s a bit disappointing that this caps out at 30% given that it’s on a limited Servant with really bad NP gain. The battery also provides 10% charge to Bakin’s allies, which is potentially nice on occasion but probably not huge in most cases, as well as a burst of 15 critical stars, which would be nice if Bakin weren’t stuck with a measly 20% in total crit buffs. As-is, the stars won’t matter much, since Bakin can’t output good crit damage regardless. Party charge is sometimes nice for 90+, though, even if it’s just 10%.

The Eight Virtues A

The Eight Virtues provides a little bit of everything. It gives 20% to all three card types, plus 20% NP damage up, which makes it a nice steroid. Bakin will usually use this selfishly, but it can be given to an ally in a pinch, which can be handy for some 90+ setups. The skill also gives 20% crit damage up, which is… pretty negligible. Crit damage buffs less than 50% tend to feel underwhelming, so 20% is going to be barely noticeable. The skill then also brings Bakin’s only utility, in the form of a small heal, a one-time dodge, and a one-time debuff immunity. There are all decent effects, but the fact that they’re tied to Bakin’s primary steroid means she’ll mostly be the one benefiting from them, making them less flexible than they might otherwise be.

Increase own Arts Card effectiveness (3 turns).
Apply Buff to self (3 turns): When attacking with Arts Cards, increase all allies' ATK by 5% (3 turns).

Gesaku Zanmai is a generic 30% Arts buff. As with all of Bakin’s skills, it’s on a 6-turn cooldown at max level, which is a little long for a skill of its type. In exchange, Bakin grants the whole party a 5% attack buff any time she uses an Arts card, including her NP. This is Bakin’s de facto ramp, since it increases her damage after each NP. Unfortunately, it activates after the card or NP in question deals damage, and it’s a deeply unimpressive 5% buff per proc, meaning Bakin doesn’t actually scale up all that much. Even if you get lucky and get both available Arts cards on turn 1, Bakin gets a whopping 15% attack up on her second NP and 20% on her third. Yay? Even setting aside the low value of the buff, this skill is held back by the fact that Bakin only gets two non-NP Arts cards per three turns (outside of special cases). Furthermore, if Bakin uses her Arts cards pre-NP for the extra damage, she’s leaving a ton of potential NP gain on the table, which isn’t a great feeling. In CQ contexts, the extra NP gain is usually more valuable than 5% attack up pre-NP, but having to make that trade at all is gross.

Bakin’s NP is extremely generic, pairing bog-standard Arts refund with… not much else of note. It does get supereffective damage versus Evil enemies, which is nice sometimes, but it’s not something you can rely on for farming, and AoE CQs with exclusively Evil enemies are a rarity. Bakin also gets a small power mod versus Demonic enemies, which is as niche and unnecessary as ever, as well as 8 whole critical stars per NP. Even if those stars do let Bakin crit, she’s not going to be doing much damage off cards, so eh.

Bakin is a typical Arts looper, so for farming and CQs she’ll want double Castoria. Her loop specs are such that she can do 2/3/x or 3/2/x nodes CE-less with Mana Loading and Oberon—and with slightly less optimal conditions if she gets lots of overkill. 2/2/x nodes are generally going to be beyond her unless she’s getting massive overkill or otherwise getting extra NP gain buffs (such as from an event CE). There are a wide range of possible farming variations, as usual, but for the most part, expect Bakin to be able to farm standard nodes, with the ability to make up for a single missing enemy in a pinch if you have optimal tools.

The only weird thing about farming with Bakin is that (assuming you know her NP will kill and her cards won’t) you want to make sure to put her Arts cards before her NP if you have access to them, as that’s required for her to ramp fully. If Bakin loses out on her Arts cards—for example, because her NP killed all enemies in a wave—she loses out on potential attack buffs as well, hurting her already-low damage.

For hard fights, Bakin is a mostly conventional blitzer. Aside from the limited defensive tools on her second skill, Bakin doesn’t have much in the way of survival, so she doesn’t really want to stall if she doesn’t have to. Double Castoria setups with whatever third support you have—Tamamo is nice for damage and Oberon for looping—will increase Bakin’s likelihood of clearing quickly. If you have to play slower, standard Castoria slowplay will work decently. Reines/Castoria teams are always great and unlikely to go down.

The Black Grail is Bakin’s best CE for damage output, though CEs like Painting Summer and Mark on a Smiling Face are good for loop stability, especially if stalling. Anything that you would typically run on an Arts unit will work here—Bakin is very bland.

Crit damage CCs aren’t a bad idea on Bakin, as she has some star gen abilities and Rider star weight but only 20% in in-kit crit buffs. NP damage CCs are a solid pick for Bakin’s Arts cards, too, since she sometimes wants to put them before her NP anyway.

If you’re going to grail an AoE Rider for gameplay reasons, grail Habetrot instead. She’s much better and benefits more from the grails besides. It is always valid, of course, to grail characters just because you like them, but Bakin has little gameplay value to recommend her.

Bakin is fine. She’s undertuned as an Arts Servant and has a number of annoyances within her kit, but ultimately she has loop specs—albeit limited ones—and decent steroids. The biggest mark against her is that she doesn’t really do anything meaningful that Habetrot doesn’t also do, and Habetrot does do a lot of things Bakin doesn’t… on top of being free. If you like Bakin and choose to invest in her, she’ll be passable, but she’s the weakest AoE Arts unit we’ve gotten in a long while. 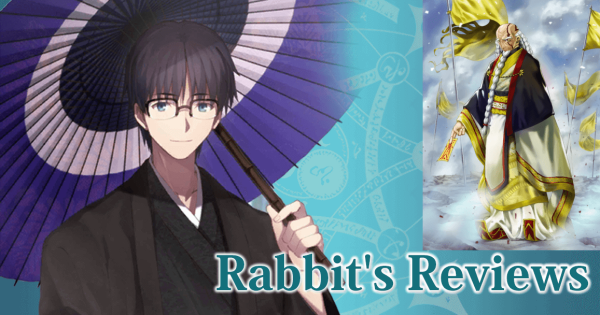 [JP] 4* Saber Summer Gareth
Source: Atlas Academy Availability: Limited Stats …
[JP] 5* Pretender Lady Avalon
https://www.youtube.com/embed…
How better is Paracelsus compared to Tamano for NP refund
I know Tamano is better than him for damage but just how much better is his 20% arts…
Black Grail Farming
I just got my first black grail after 2.5 years while rolling for kiara. and tested it…
Another Appmedia Overhaul Thread
AppMedia : みんなのソーシャルゲーム攻略情報サイト！ – 14 Dec 17 【FGO…
Read More