Landorus Therian Forme’s movepool consists of Mud Shot, Extrasensory, Earthquake, Bulldoze, Super Power, and Stone Edge. While these attacks have a higher energy cost than its Incarnate Forme’s, their higher damage results in most Ice-type attackers getting one shot by them.

Landorus Therian Forme can be defeated relatively easily by two Trainers. Like most Raid Bosses with doubled weaknesses, Landorus-T should be an easy fight. 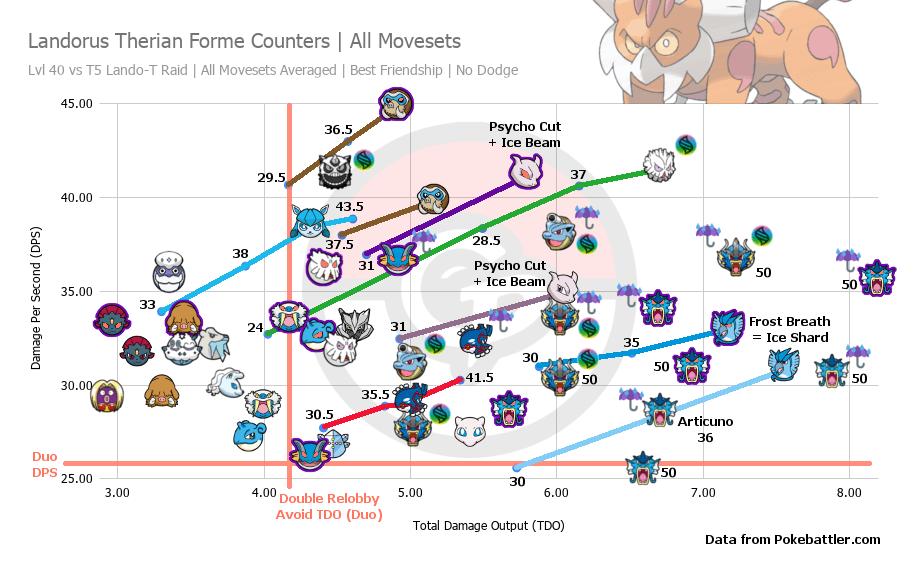 Given that Landorus Therian Forme is doubly weak to Ice-type attacks, it’s no surprise that the best Counters to this raid use them. The cream of the crop include Mega Abomasnow, Shadow Mamoswine, Mamoswine, and Shadow Mewtwo (Ice Beam). You won’t be held back too much if you don’t have these Pokemon all maxed out though, as the Landorus Therian Forme Raid can be conquered by 2 Trainers with less optimized options.

As for the less optimized options, Articuno and Shadow Articuno are notably bulky while maintaining above average damage. Glaceon also stands out as one of the few high damaging Ice-types that can survive Landorus Therian Forme’s Charge Moves. Mewtwo (Ice Beam), Shadow Abomasnow, Abomasnow, Kyogre, Shadow Gyarados, Gyarados, Mega Gyarados, and Mega Blastoise are also solid general options. The Water-types are even better in Rainy Weather, but even with a Water-type Mega Boost, they still stand behind the greater Ice attackers.

Most other Ice-type Pokemon deal solid damage to Landorus Therian Forme, but are often knocked out immediately by its Stone Edge, Earthquake, and Super Power. For this reason, when considering more budget options, level 30 iterations of the aforementioned Pokemon may be more effective than most other Ice-type Pokemon (such as Galar Darmanitan, Shadow Weavile, and Weavile).

Note: The featured Breakpoints don’t include the Mega Bonus or Mega Same Type Bonus. If you would like to know if you’re hitting any breakpoints specific to those bonuses, check out our Breakpoint Calculator.

At this time, Landorus Therian Forme is the most powerful Ground-type Pokemon in Pokemon GO. Unfortunately, being the best Ground-type doesn’t matter that much as the type is still often out-done by other types in Raids. Fire and Grass-types often have better attacks, have Megas, and share the weather with Ground-types. Fire-type Raids invite powerful Rock and Water-types, and Poison-type Raids bring in Mewtwo to rule the roost. This leaves Electric-type Raids as Ground-types primary shot at supremacy, as long as the Electric-type Raid Boss doesn’t have a secondary type. As far as Tier 5 Raid Bosses are concerned, that’s only Raikou and Mega Manetric.

This isn’t to say that Ground-type Pokemon aren’t good for Raids. Ground-type still hits 5 different types for super effective damage and has a common weather. Landorus Therian Forme being the most powerful one gives it plenty of opportunities to show up in the Top 5 (baring weather or Megas). Ground-types getting a powerful Mega Evolution would do a lot for the type along with Landorus’ relevancy. It wouldn’t be a bad idea to hunt for a good IV one and save your Stardust for when the time is right. Until then, Landorus Therian Forme just feels like a premium Heatran counter.

Use in Master League PvP

Overall, Landorus Therian Forme is like a Melmetal with better Steel, Ground, and Fighting-type matchups but with less threat on Kyogre. It’s also like a Groudon that can actually hit Flying-types, at the expense of less consistent Dialga matchup. Having Super Power as bait move is a drawback, but that doesn’t stop Landorus Therian Forme from being a top threat in both the Master League Classic and Master League XL Metas.

While not using Earthquake is unfortunate, the energy cost of Superpower and the coverage provided by Stone Edge are often necessary for Landorus’ success. If you’re using Landorus in the back, Earthquake may be considered over Super Power for its heavier damage, but Landorus may struggle to close fights in which it doesn’t one shot its opponent or if it has to make up for shield disadvantage. That said, it could swing matches around against opponents that were expecting Super Power instead of Earthquake.

When it comes to Ultra League and Great League, Landorus Therian Forme shouldn’t be considered.

Landorus Therian Forme would love to have its Incarnate Forme’s moveset of Rock Slide and Earth Power; unfortunately, Pokemon GO changed its movepool to feature Stone Edge, Super Power, and Earthquake. While this is a downgrade, Landorus Therian Forme still has superior stats, is still the top Ground-type Raid attacker, and plays well in both Master League XL and Master League Classic. That said, using a Ground-type attacker isn’t always ideal in Raids and participating in either Master League can be an expensive hassle compared to whichever League(s) GBL has running alongside them.

Now that the Legendary Forces of Nature are out of the way, what set of Raid Bosses are coming next to Pokemon GO? There is speculation that Xerneas, a Fairy-type Legendary Pokemon, is coming in May. That, along with evidence that Sylveon is coming soon to GO, suggests we may not only be getting some new Pokemon, but new Fairy-type attacks as well. Whatever does happen, we’ll see you when we get there.