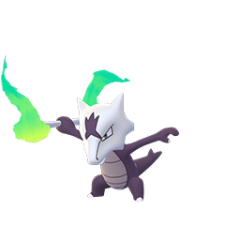 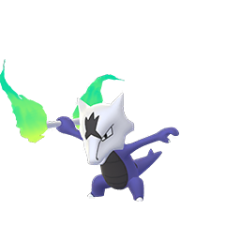 Alolan Marowak doesn't have any of the distinguishing features that it has in the main Pokemon games. No Thick Club, no Lightningrod. I guess it kind of got boned in that respect. Even Shadow Bone is less powerful than Shadow Ball in PvE. Poor stats doesn't help much either.

Hex generally performs better than Rock Smash thanks to STAB and significantly higher energy gains. Fire Spin also benefits from STAB and improves A-Marowak's overall win rate, but gives up some matchups due to its different typing and worse energy gains.

Bone Club costs the least amount of energy, and is mostly used to bait shields. Its pitiful damage output results in worse performance, even when Super Effective, and is usually only worth using for damage if it would be doubly Super Effective (example vs Steel/Rock). Shadow Ball takes advantage of STAB to hit a large majority of Pokemon for heavy neutral damage, and has better energy synergy with Hex. Shadow Bone is a move limited to special events and Elite TMs, but offers an alternative option that costs 10 less energy and deals less damage than Shadow Ball. The choice between the two is ultimately up to preference, with arguments for either earlier accessibility or stronger damage. Going for straight Shadow Bone can yield more consistent results than attempting to bait shields with Bone Club, in which case Fire Blast can be selected instead to surprise unsuspecting opponents.

Alolan Marowak's claim to fame was during the Silph Arena Kingdom Cup, where the ubiquitous Lucario and Bastiodon demanded hard counters due to their sheer dominance. In open PvP, the popularity and use of Fighting and Psychic-type picks, especially Medicham, paved a way for Ghost-types like A-Marowak to enter the rosters of many trainers. A total of 9 resistances backed by admirable bulk helps to offset A-Marowak's 5 relatively common weaknesses. Outside of its specific anti-meta role A-Marowak generally doesn't perform as well as well as top tier Pokemon, but can still hit most for good damage thanks to Shadow Ball.

As great as Alolan Marowak is for the Great League, it drops off the top charts in the Ultra League. Maxing out at 1835 Combat Power, itt won’t be able to obtain the stats needed to compete against some of the big players we see such as Giratina. I would keep your Alolan Marowak as the Great League hero it was meant to be!

Stay away from the Master League with Alolan Marowak. Like the Ultra League, his Combat Power cap of 1835 limits his strengths when competing against the best of the best!