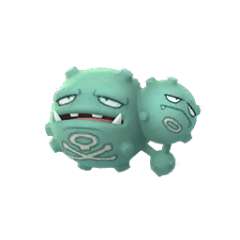 Poison is already one of the least prevalent types in the game, exacerbated by the meta’s lack of Grass and Fairy-types. Even among other Poisons, Weezing is outclassed by the likes of Victreebel and Tentacruel. As such, it has been relegated into a tank role, in which it is further crippled by the absence of its usual Ground-type immunity.

PoGO has not been kind to James’s classic buddy, but to its credit, Weezing has a defensive movepool well tailored for counter coverage, making the most of a bad situation.

Infestation is Weezing’s only fast move that doesn’t suck, so it’s the fast move of choice. Sludge Bomb (80 power, 50 energy) is a must for solid STAB damage.

Despite its high defense, Weezing just doesn’t do too much in Great League. It’s pretty solid against Medicham, at least, but so are a number of other, better Pokémon.

Weezing’s not bad, it’s just outclassed. By a lot. Use Shadow Ball here to help against Giratina.

Maxing out at 2293 CP causes Weezing some serious problems in Master League.