Community Posts with Keyword Scyther All 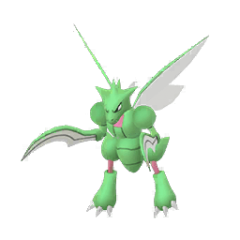 What was once a niche Flying Type attacker has fallen in status to nothing more than "not Scizor yet", which itself is a devalued Pokemon. Just evolve it, and then let it sit in your box until you need Mega Scizor.

Fury Cutter tends to perform better than Air Slash due to the former's greater energy gains and the latter's unextraordinary damage output.

X-Scissor doesn't deal a lot of damage, but is useful for its low energy cost in order to bait shields. The changes to Night Slash in the Dec 11, 2019 rebalance makes it a good option for baiting shields, but its coverage isn't particularly useful. While it does have a small chance to proc a +2 ATK buff, relying on this can be very inconsistent. The legacy Bug Buzz is actually preferred over a coverage option in many cases due to Scyther's low damage output overall. Aerial Ace can chosen for coverage, but has deals poor damage even with STAB.

Scyther is an anti-meta pick for PvP, with an offensive stat distribution that results in poor bulk, a very vulnerable typing, and a rather toothless moveset that relies on access to legacy Bug Buzz in order to threaten its opponents. While Scyther lacks coverage against its 5 weaknesses, it can still excel if it picks its fights carefully. Not only does Scyther get comfortable wins against most opponents weak to Bug-type attacks, but a greater attack stat combined with the high base power of legacy Bug Buzz allows Scyther to win aganist unlikely opponents such as Quagsire, Blastoise, and even Lanturn, granted at least one shield. Overall a considerable pick that would be ranked higher, but numerous losses against off-meta Pokemon hold it back.

Scyther's typing and exploitable vulnerabilities make it difficult to use in Ultra League, and its role as an anti-Psychic is typically handled more easily by Dark-types in this league. Wins against Snorlax, Cresselia, and Umbreon are welcome, but not enough to make up for the numerous losses against other popular Pokemon.

A max CP of 2706 is pretty lackluster for Master League, and Bug-type attacks aren't as valuable in this league either.