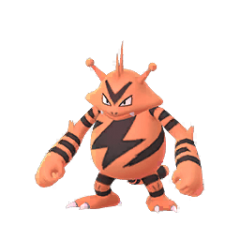 How Shiny is Acquired
Evolution, Wild

Electabuzz is Jolteon’s second cousin in terms of relative power. Access to Thunder Shock/Thunderbolt makes this Pokemon relevant against raid bosses like Vaporeon or Blastoise, but its low CP makes it suboptimal against the legendary birds. There aren’t many Electric-type Pokemon right now, which is to Electabuzz’s favor.